Is it just me or are there a lot of birthdays in December? I won't comment further on what that means about procreation seasonality but can I just say that between Christmas feating and Birthday treating I'm about ready to sponsor some Botanic Garden running...calling all floggers...ensure another year of good eating! Come to the flogger event at the Botanics, no it's not a picnic you jammy sods!

I digress. I've found a lovely little spot. The food is good, in fact, it's pretty yummy delicious. It's by Michael Lu, he owns the Indochine group. There, I thought I'd better get the bad news out of the way.

The good news is, its a gorgeous spot, the food has been consistent every time that I've been and it's still empty enough (and hard to get to) that you'll not be disturbed by anybody. Given how fishbowl-awful crowded Singapore has become of late, I love that.

The times I've been have always been at night, so it's never been optimal to take pictures of the surroundings. Basically the restaurant is opposite Col Bar, ensconced deep in Portsdown Road and surrounded by a jungly area (and around that jungle, the Biopolis but let's suspend our urban imaginations for awhile).

The menu is quite small which I thought was brilliant, given the quality of the items was high and one really doesn't need to overextend the kitchen. There are about 6 soups and salad dishes, 8 or 9 mains and 5 desserts from cakes, pavlova to profiteroles. The beverage list is far more extensive than the food menu. 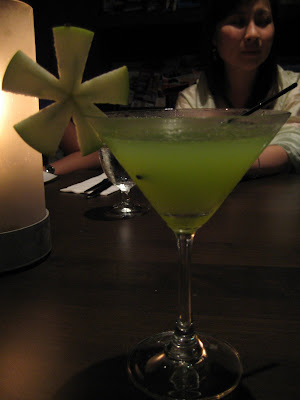 Given that we forgot to bring wine (and to ask their corkage, oops), we decided to get cocktails and a flaming lamboughini for the birthday girl. The green apple martini is quite brilliant, light and refreshing, thought I've heard all the fresh fruit martinis are good. The mojito was a bit strong and overwhelmingly sugary brown. The drinks are fairly expensive, I don't see why a martini should cost, I think it was, $12. 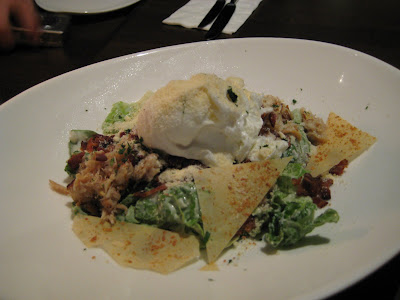 We tried two salads, the Caesar Salad with Crabmeat which had a very tasty dressing and came with a poached egg. The use of crabmeat with the caesar was a welcome change from chicken or a plain salad, it tasted great. 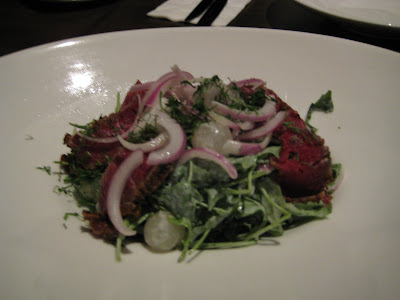 The second salad was the Rare Beef salad and again, the quality of the beef surprised me, it was full of flavour and made a good contrast to the light vegetables. So far so good.... 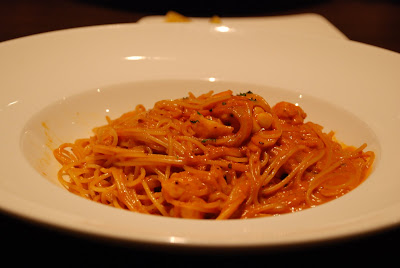 For mains, we had the Slipper Lobster Capellini, which was a little wet but had a beautiful depth and chunks of lobster that contrasted well with the tomato base vodka sauce and the small cubes of vegetables. 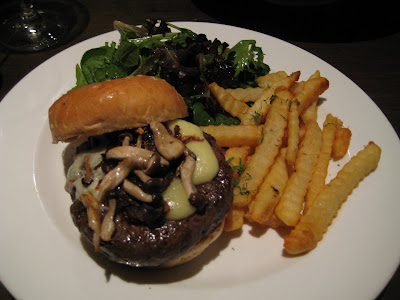 The main that really surprised me was the 'Infamous Cicada Burger'- I had heard from reviews that it was good but it was in fact, outstanding. The patty was unbelievably juicy and the topping of Gruyere and Gongonzola cheese as well as some long stemmed mushrooms offset the beef very well. The warm, happy feeling from this burger probably shot it to second on my list of favourite burgers in Singapore and I wasn't surprised to discover that this is actually a Wagyu burger, even though apparently it's not advertised as such. 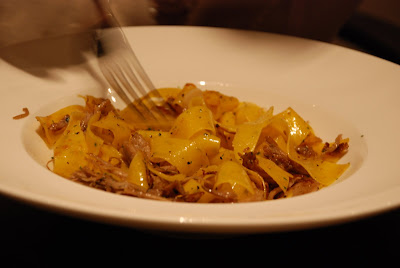 C. had a parpadelle tossed with dried duck confit, which while simple and just a tad too oily but I'm probably splitting hairs here, was very tasty, especially the teased slices of duck meat. I like that they sprinkled the pasta lightly with parsley, its really quite a nuanced flavour and dish but it does pack a punch. 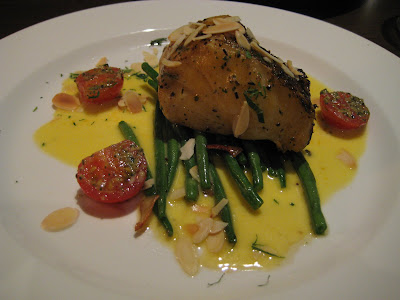 M. had a fillet of sea bass with cream sauce served with cherry tomatos and long beans. The texture of the fish is soft yet supple, it was very good and buttery. The mains were all delicious and well-prepared. I wasn't disappointed and my friends, whom I had brought to the restaurant, were pleasantly surprised. 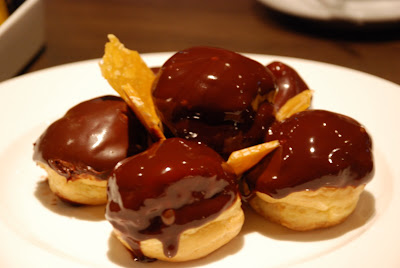 We had the profiteroles with fragelico cream and the apple tart with fig and honey ice cream for dessert. The profiteroles were brilliant, very different to the ice cream ones at PS Cafe, these were solidly filled with wine-cream but the taste and texture were fantastic and much more tasty and substantial then the ones at Au Petit Salut, which I'm not a big fan of (they taste overwhelmingly of just chocolate sauce).

The apple tart had absolutely heavenly ice cream. The tart itself was fine though without a real kick.

The service staff could use a little work though, they interject to remove plates and amongst the rather odd things they told us were "we don't have extra plates" and "your mains are ready already, sorry, can we serve it now please".