This has been a season of feasting! I was treated to a lovely and large meal, in honour of the birthday of our generous and beautiful hosts, A. (and T. too, thank you guys very much)! 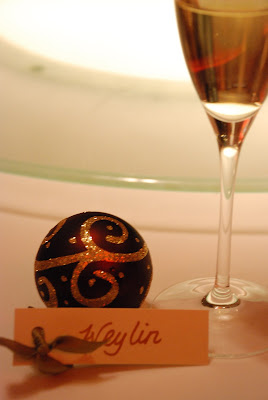 The private kitchen concept was pioneered in Hong Kong, where the lack of space and high rentals meant that restaurants were a bit expensive to set up and maintain, especially on a small scale. People started to think up creative places to cook meals, sometimes in their own homes and in abandoned warehouses and offices, setting up just a couple of tables and taking reservations online or by word of mouth. There would be just one menu per night, depending on what fresh produce was available and what the chef felt like cooking. 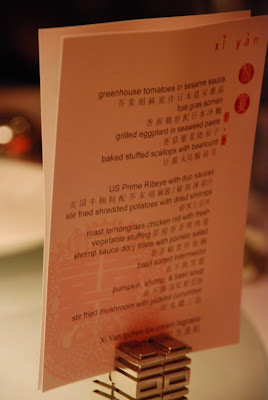 Xi Yan, if you didn't already know, was the first official private kitchen dining concept in Singapore and it was a duplicate of a similar restaurant in Hong Kong by chef/owner Jackie Yu. It opened some years ago and I had actually been to the place pre-opening, thanks to an intrepid lady J. who had secured tables before the restaurant launch. (The downside was that we had to eat next to all these Chinese TCS stars and wound up appearing briefly on television for their little epicurean show-and-tell publicity video). 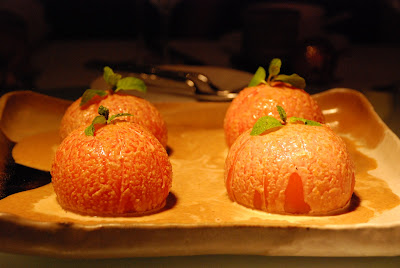 The dinner then, though good, was painfully long, lasting about 3-4 hours and the service left quite a bit to be desired. There was also something very artificial and ackward about eating in small confined space with just two other tables, one felt more than slightly pretentious while the server (loudly) called out that the rice noodles had been specially picked from the baby leaves of cliff weeds in Yunnan and pickled by the fresh spring water...you get the idea. 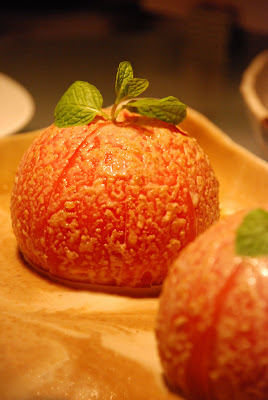 So I never came back, although I'd wanted to bring my family (but fell short of subjecting them to a continuous 3.5 hours of conversation). I was terribly interested to see what had become of the place as it's near my office and appeared to be stubbornly remaining open, year after year. The first dish remained the same and one of my favourites, momotaro tomatoes marinated in a sesame sauce. Absolutely refreshing, juicy-sweet and delicious. 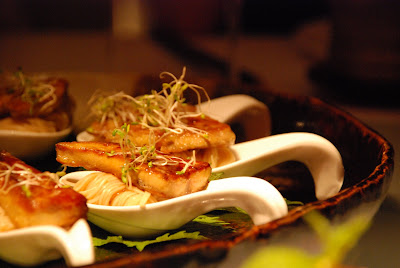 I was pleasantly surprised at the speed of the service. The first few dishes are all a bit like appetizers and were served in a quick fashion (unlike the previous time). They had also shortened the introductions and explanations for each dish and the dishes remained pretty creative. This was the foie gras somen. 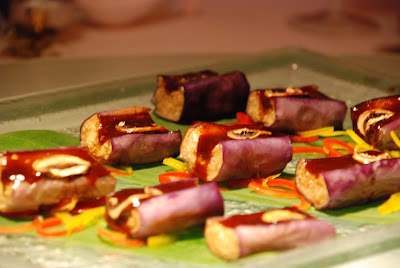 This was the grilled eggplant in seaweed sauce, very tender and moist. The only complaint that I have about the food now, is that the dishes were not always hot, rather, by the time they reached the table and definitely by the time they were served, they were at best lukewarm, including the soup and the meat. 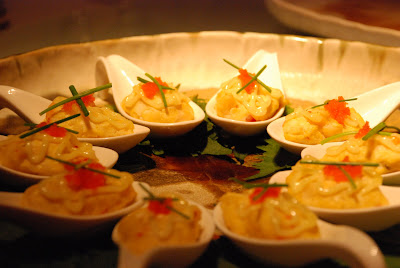 This dish was scallops stuffed with beancurd and it was probably one of my least favourite dishes, although it was still tasty, it left less of an impact than the other starters. 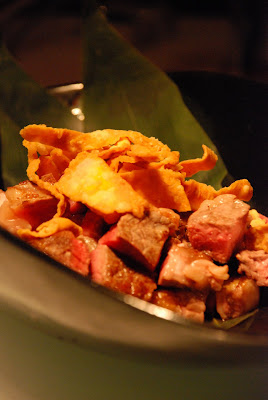 After the four starters, they brought out the main dishes. Instead of a regular family-style Chinese service, Xi Yan brings out each course seperately, to allow for more attention to be focused on the fresh ingredients and presentation of each plate. This was the US Prime beef, it was nuanced and succulent and the meaty marinated taste was lovely, although it was not hot. 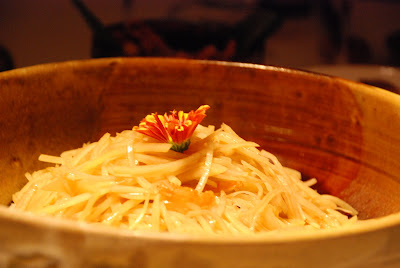 The second dish was shredded fresh potatoes, which was a simple but well-prepared dish. The first time I came, they were championing their lobster dish, which was a huge plate of crustaceans purportedly with their feelers still twitching. This took up a lot of the kitchen's energy and focused the whole meal around the first plate. This time, the mains seems much more manageable and I think that helped with the whole flow of the dinner. 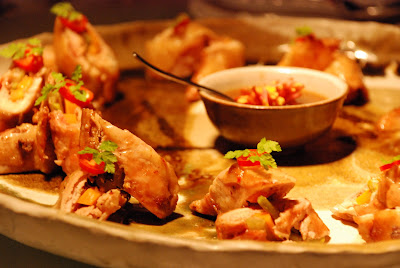 This was one of the dishes that I didn't enjoy too much, the lemongrass chicken stuffed with vegetables. Although I appreciated the workd involved in rolling the chicken around the stuffing, the chicken was a bit rubbery and the combination somehow both less than tasty yet a bit too oily. By this time, the girls were getting a little full from the combination of tastes and small portions. I noticed though, that the kitchen has already decreased the number of courses served. 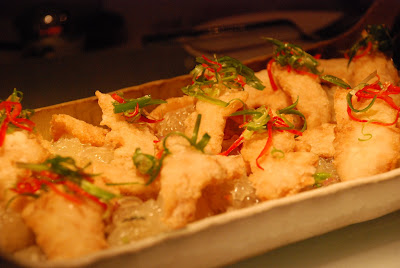 This was the last main dish before the intermezzo, a dory fish dish, very reminiscent of usual Chinese cooking and not too special. I'm probably a bit biased against fried fish dishes, unless they are very elegant, being a big fan of steamed Asian fish. While I appreciated the little touch of basing the fish on a salad of pomelo, I didn't really feel that it added much in terms of the cohesion of the tastes. 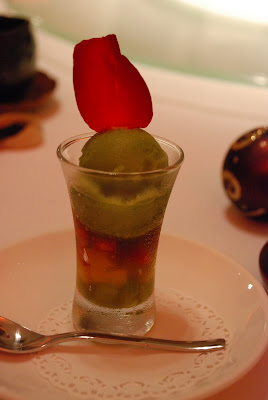 The surprise of the night, for me at least, was the basil ice cream with fresh fruit. It was fantastic, I usually never like basil ice cream because of its overpowering, almost herbal taste but this one was light, refreshing and the interplay of flavours between the ice cream and the fruits, diced strawberry and apricot, was impeccable. I could have eaten a huge serving of this! 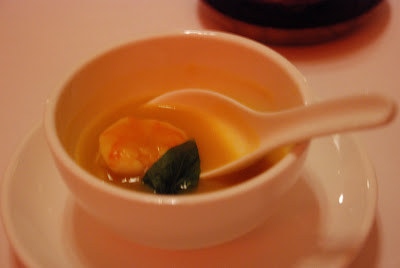 The last two courses were more bulky, carbohydrate-type items, I guess in place of the traditional (and horrid) e-fu noodles and mangy egg fried rice that gets served at the end of wedding dinners. These were much more polished, the pumpkin, shrimp and basil soup was very comforting, though it could have been piping hot. Also, the shrimp imparted a slightly fishy taste to the soup, I prefer to serve pumpkin or cauliflower soup with crab or lobster claws standing in the middle of the soup, rather than cooking the flavour with and into the soup, unless the seafood is incredibly fresh. 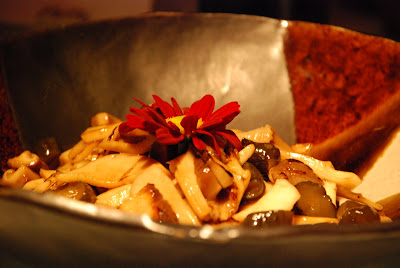 The mushroom and pickled cucumber dish was a bit too simple, though a nice way to end of the meal, given especially that we were very full by this time. It had been a racous, convival and animated dinner with company and conversation that I throughly enjoyed. I think that was a big part of the meal as well as the pleasure of sharing good food and wine. 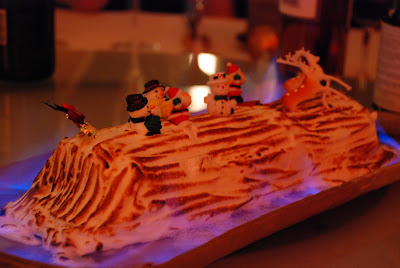 The birthday cake was a lychee log cake, I had thought at first that the menu read log cake with lychee and I was sceptical but this was actually a lychee sponge with lychee ice cream, which was fantastic. It brought back kiddish memories of Artic Rolls but this was entirely a sophisticated, grown-up version with an alcohol-anointed merange crust that they lit and flamed at the table. Again, I could have had multiple helpings of this and we all agreed that it was a wonderfully refreshing and sweet end to the meal. 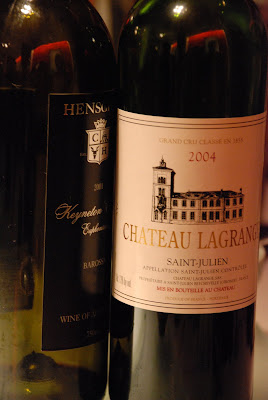 I thought I had brought an Australian white and two French reds but upon arrival, I discovered that the Keyneton Estate Euphonium is a red and worse, it is a blend! Shock shock horror. I must not have been very sober when I bought it.

However, the bigger surprise was that it was quite brilliant. It was a delicious clear, crisp, clean taste, which easily outshone the Lagrange (although to be fair, T. voted in favour of the Lagrange and it has a full woody musky body that will age much better than most any Australian wine). The Keyneton Estate is 63% shiraz, 18% cabernet sauvignon, 10% merlot, and 9% cabernet franc grown in the Barossa (Eden Valley and Barossa Valley).

We drank a 2001 which I had picked up in a bargin liquor store in Melbourne for I seem to remember A$36 (but remember I wasn't sober so who knows what the price really was). You probably can't find that many 2001 vintages here but you can find the 2004 in Crystal Wines at River Valley in Singapore, I believe for about $60.

If you're in Australia, buy some bottles of the 2005 which I've heard is a great vintage. The Henschke wines are very nice, what I had meant to bring, was one of their Adelaide Hill Sauvignon Blancs, which are crisp, clear and dry. Don't buy your Henschke wines at Culina though, I was just there last weekend and indignantly pointed out the completely rip-off prices (I believe $130-160) that were stickered on.

The Henschke vineyard is known for their premium wine, a shiraz called Hill of Grace, this will set you back perhaps A$500 and while it's smooth, I remember it as a pleasant wine and not really one that blows your socks off. You're probably better off investing in a solid French red, really or buying another, similar Eden Valley red like the Keyneton.

I've gone on a bit about the wines haven't I? Henschke is owned by Lion Nathan in Australia and I very much regret that I forgot to ask them what was the best buy in their stable the last time we met. I really do think this is a wine worth collecting as it's a very recognizable and somewhat premium Australian brand hence its pricing power may improve with time.

The second wine was a 2004 Chateau Lagrange, which is a winery in the Saint-Julien appellation of the Bordeaux region of France. This has been bought by the Japanese whiskey company, Suntory and has undergone a revival in recent years. The wine, after the Keyneton Estate, was musky and a little sediment-y, though it was hard to miss its full, strong, powerful body. It was too young to drink and will mellow and smoothen out in time, I was just curious and brought the bottle along but we really should have drank the third red of a St. Emilion 1997 vintage, which we sadly, never got around to. 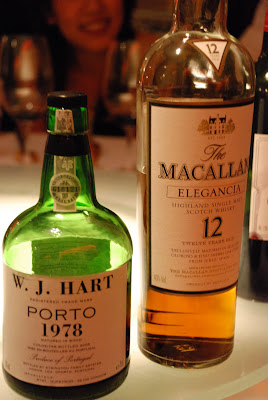 We also had a Macallen 12 year and a 1978 port. The port was particularly special, it was a gift A. had bought from the storybook Parisian purveyor called Ryst Dupeyron on rue du Bac. They've been in business for the better part of the last century and have bottles on display and for tasting, in annual chronological order, dating back to the 1950s.

The meal was truly fantastic because of all its elements and I had a great time. I'd encourage you to go to Xi Yan, especially if you've never been. The private kitchen experience and the quality of the food make it a very special place to have a meal.