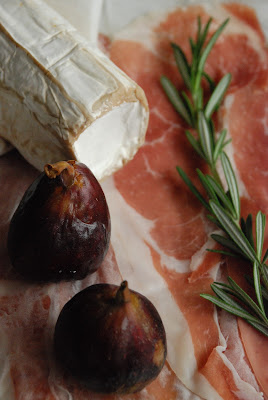 That is an unwieldy name for a small packet of goodness. I felt like I should just post the photos as they would be terribly self-explanatory but perhaps I should just say also that the combination of the sweet juicy figs, infused with prosciutto saltiness and the melting goats cheese and herbs is ridiculously good and complex. 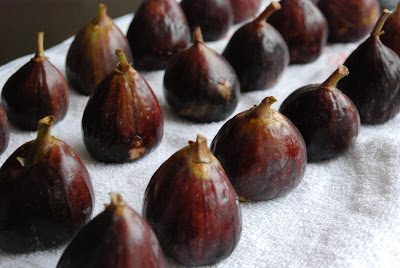 I made this for our Christmas lunch and although they taste best just emerged, out of the oven, as a warm, wobbling, bleeding plump fig (the greedy vultures ate half the pan!), they elicited mmms of approval after an appreciative silence around the table.

I used Turkish figs, since that's the kind readily available in Singapore but if you can get French figs or Australian figs (figs are definitely one of the foods I traffic across borders), it would taste much sweeter. I washed and dried 15 figs, chopped their stems and bottoms off and lightly peeled off the purplish skins. 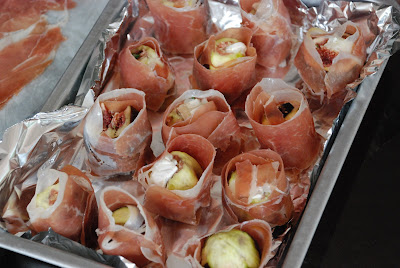 You don't have to peel off the skin, except sometimes it's a bit dried up or slightly tannic. Then you core the fig, push in a sprig of rosemary (without the stem) and stuff in a small cut piece of goat's cheese. Or mozzerella for friends who don't like the taste of stronger cheeses.

Then holding the stuffed fig gently, you want to wrap it in a slice of prosciutto or parma ham. I like to start wrapping from the side with the exposed cheese, so that you use the ham to kind of wrap it in and prevent the cheese from melting out of the fig into your roasting pan. It usually takes less than one full slice of parma to cover the fig, so you can economize on the parma slices if you're an efficient wrapper! 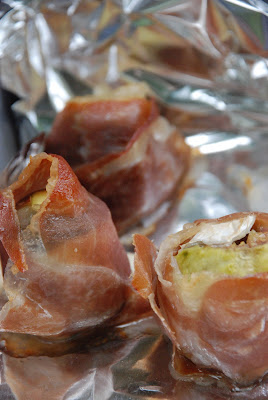 These are now very pretty little parcels, which you can prepare beforehand. You put them in the oven at 150C for about 10-15 min, it doesn't take long and you want to be sure that the prosciutto doesn't completely crisp up. You still want it soft and salty, not hard and crunchy. Think more ham than bacon. 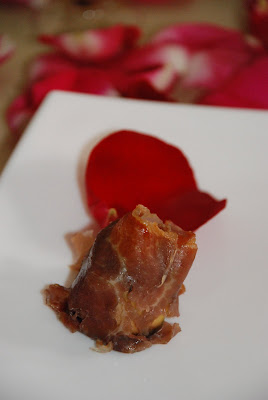 An interesting combination, if you have the time, is to thinly and lightly drizzle these with cold acacia or manuka honey. Yum.
Posted by Weylin at 11:31 AM