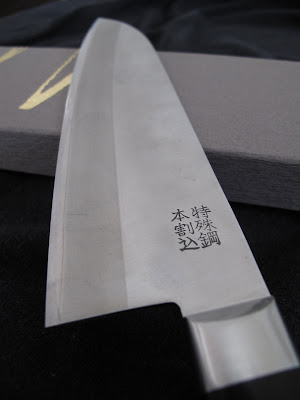 There isn't a specific point to this post, it's just an opportunity for me to recount the experience of buying a kitchen knife in Japan, as well as a collection of other bits of information to bear in mind if and when you're next buying a knife, whether or not you're in Japan. 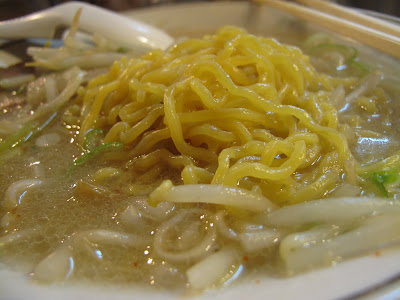 Over Christmas, I went on an organised tour of Hokkaido, the penultimate day of which led me to Sapporo, the capital of Hokkaido Prefecture, where we tourists were deposited in Tanuki Koji Shopping Arcade (狸小路) in Susukino, Sapporo's red-light district, which, oddly enough, is also famous for the Sapporo Ramen Alley, which features over 10 ramen restaurants serving miso ramen (overrated and overly-salty, if you ask me).

I was not planning on buying a knife, but among the dross of gambling dens and souvenir shops, I stumbled across a knife shop (宫文) towards the end of the shopping arcade (狸小路 6 or 7). Normally I can never resist a knife shop, but this was like I'd died and gone to Lizzie Borden's idea of heaven. There were all manner of blades there; no samurai swords, but there was an entire rack dedicated to scissors, while a shelf of nail clippers sat adjacent to menacing-looking kiri (axe-like implements used to prepare soba and udon noodles).

After eventually deciding to buy a kitchen knife, I first had to decide what kind. As my Global chef's knife was still serviceable (though it is embarrassingly blunt so I really should sharpen it at some point), and my Kyocera ceramic santoku had long chipped into disuse, I figured I should get another santoku. It also didn't hurt that the one I had my eye on was one of the cheapest blades in the shop at 4515 yen (about $75), though some of the other chef's knives and santoku were easily twice that amount.

As this Wikipedia article helpfully explains, the santoku (三徳) is so named because it represents the "three virtues" of knifework: slicing, dicing/chopping and mincing, and is increasingly the knife of choice in most kitchens.

The problem for me, however, was that there were two santoku knives in a similar price range that looked good: the one I had originally alighted on, and another (slightly more expensive) one that had more elaborate kanji carvings on the blade. Another difference, I discovered (with some difficulty due to the language barrier), was that the former was made of half carbon steel and half stainless steel, while the latter was full stainless steel. Which to choose?

It was at this point I wished I'd paid more attention the numerous articles I'd read in blogs and cookbooks about knives: the relative merits of carbon and stainless steel, how far the tang of the blade should go into the handle, whether it mattered if the blade was angled on one or both sides, and all the rest of it. As a result, one reason for this post is for me to aggregate some of the interesting and useful knife-related information I've found.

Francois Xavier of fxcuisine has a beautiful post showing how hand-forged Japanese knives are made, while Michael Chu of Cooking For Engineers has, as you'd expect, a series of in-depth and insightful articles about different knife parts, types and brands. Downstream, Chubby Hubby has a great illustrated post about knife-sharpening. Wikipedia, as usual, also has an excellent explanation of the history and technology of Japanese cutlery.

None of these, however, quite solved my santoku dilemma, so I decided to resort to the oldest trick in the book: judging a book by its cover. 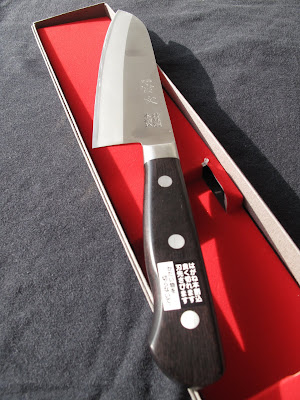 Really the most important thing about buying a kitchen knife is that it must feel comfortable to you, since you're going to be using it regularly. Pretend to slice and dice with it and see whether you like how the knife reacts to your hand movements. Personally, I preferred the slightly heavier heft of my original carbon/stainless steel knife, and the relative technical merits of carbon vs. stainless steel (which you can find in brief here and in more detail here) are not that important (or understandable) unless you have a degree in chemical engineering. 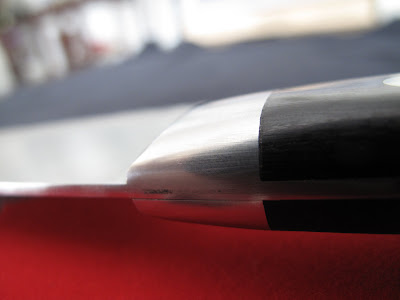 The very fact that the knife had a bolster indicated that it was forged (formed by superheating, pounding down and honing a larger hunk of steel - much like how one would make a samurai sword) rather than stamped (cookie-cut from a sheet of metal), though on closer inspection I've discovered only half the bolster (the top half, in the picture above) is forged from the same piece of metal as the knife blade; the other (bottom) half appears to be welded on, which is less elegant and resilient. 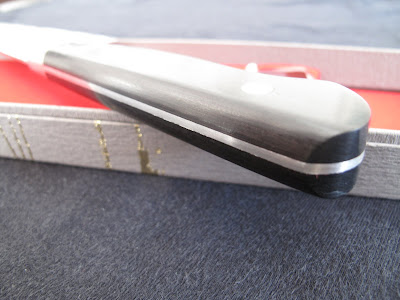 I also liked the fact that both knives had a full tang, i.e. one extending all the way to the base of the handle (above), which I feel gives the blade a better balance and prevents it from being too light or flimsy. 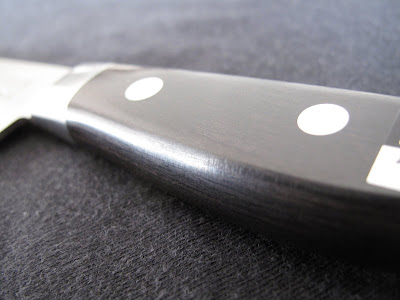 A riveted handle is apparently stronger than a moulded handle, but the only important factor for me was that the handle felt comfortable when I gripped it. I was not especially pleased with a wooden handle, as I'm concerned that it will crack with repeated washing and harbour bacteria, but almost all the knives in the shop had wooden handles, and the smooth, seal brown, fine grained wood looked very appealing. 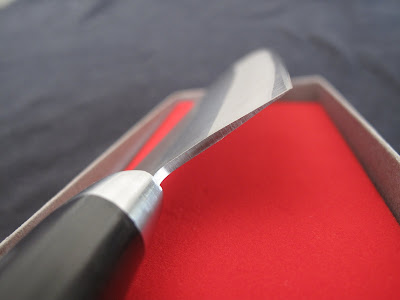 I had initially thought that the knife blade was single-beveled (i.e. sharpened and angled only on one side, with the other flat), in keeping with the traditional Japanese style. This affects the ambidexterity of the knife, and I certainly did not want to keep cutting myself because I had mistakenly bought a left-handed knife. 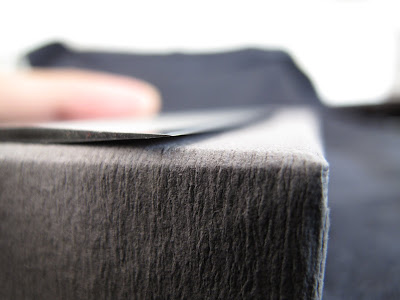 The salesman (after some miming on my part), however, assured me that the knife was equally suitable for left- and right-handed use, which surprised me, but now that I've examined it more carefully I see that it is actually double-beveled (as you can see above, when the blade is laid against a flat surface, the left-hand side is not totally flushed, as it would be in a true single-beveled blade), though the angle is still more acute on the right-hand side, reminiscent of the classic Japanese style. 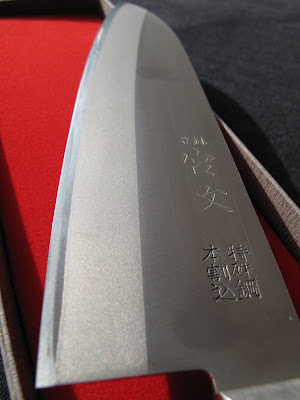 In terms of looks, I have no real complaints - the knife is sleek, elegant and fairly traditional, while kanji inscriptions decorate slightly less than half the blade, clearly earmarking the santoku's provenance. It would appear that, despite not remembering most of what I'd read, I inadvertently still managed to come away with a pretty decent knife, though of course I don't think I could have walked out of that shop with a truly inferior knife.

Having experimented with the knife today, it is not as life-threateningly sharp as I thought it would be, but it still does its work fairly effortlessly. I had no problems cutting up carrots, potatoes, celery and onions, and only the turnip was not cut as cleanly and evenly as I would have liked, but then the turnip was a bit grainy and more prone to breaking apart than the other vegetables. As expected, the carbon steel component results in some discolouration of the knife after use, but overall the santoku is a pleasure to use, and one of the better souvenirs of my trip. I would highly recommend that if you're in Japan, look out for a knife shop so that you can bring back a knife of true craftsmanship and artisanal beauty.
Posted by Colin at 9:27 PM

omg you are as obsessed as my bf about knives!!! He has a shun and a santoku too and when we go shopping, he keeps dragging me into knife shops!! omg!

Cool! I bought a couple of knives from Japan as well in my trips there, though mine was from Aritsugu, with the pride and joy being a damascus-blade from last year.

You definitely need to sharpen it. Most Japanese knives are not very sharp out of the box, and need sharpening to reach their full potential.

Get a good stone and you'll be all set.

If you're not confident of maintaining the angles, you can always get a sharpening kit with guides, like the Lansky.

I hadn't considered that. I should have asked the shop to sharpen it for me...

Do it yourself! It's not that hard. Practice on some crap knives first of course....

When I was back in Singapore, I went to this place to check out the Jap knives they had, after reading a Chubby Hubby article.

The shopkeeper was quite knowledgable, although you can probably get cheaper jap knives by ordering from an internet site like korin or japanesechefknives.

I don't know what to do with my Henckels, else I'd have gotten Jap knives.

Yes, I've been there before. David is both knowledgeable and friendly. I'm too lazy to properly sharpen my knives myself beyond a few cursory brushes against a whetstone, so I think I might just take them to be professionally sharpened once a year.