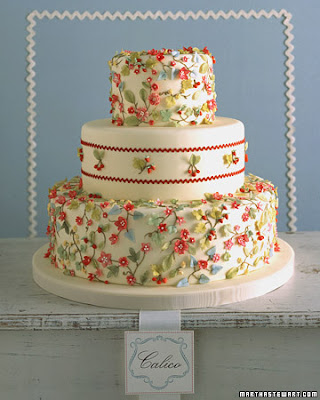 While Colin has been off eating, I've been...making flowers. Literally. I've decided to take on a new class, a cake decorating class. This itself is not great news (well, it is, I'm doing it for myself, which is pretty cool) and I've found that I'm not too far behind the other students and that I can pretty well understand what is being taught (yay). My final project though, is a 2 tier cake, decorated with the sugarpaste flowers that we have learned over the last few weeks.

And you can help by voting on what you think would be the best idea. Of course, if I wanted to ace the class, I should make a heavily calico-ed flower cake like the one above, though fashioning, painting and then adhering millions of little flowers and leaves, doesn't really appeal to me. What does, is creating a cake that is accessible, that is vaguely representative of my style (though I would like to experiment a bit), yummy to eat and that shows off at least some of the realistic and fantasy flowers that we learned in class (I do have to pass, after all).

I'm not saying that I can actually do these designs I have in mind, especially since I haven't actually tried making anything but a buttercream layered cake (I confess I might buy a fondant one if it comes to that) and technically, the cake itself is not part of the final grade. But I can try. And I figure, I can use colour to my advantage. These pictures are meant to simulate elements of the design only. 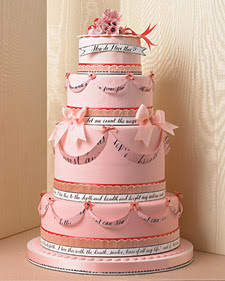 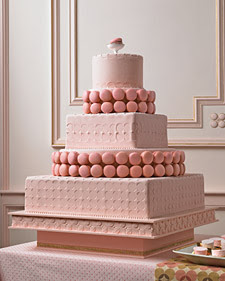 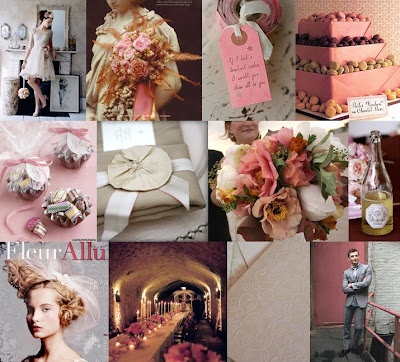 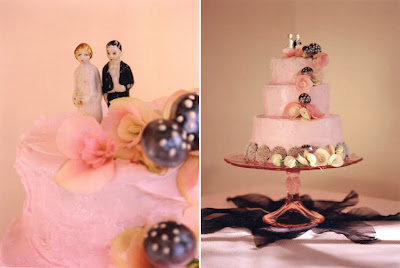 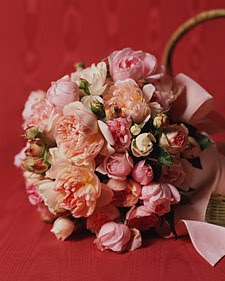 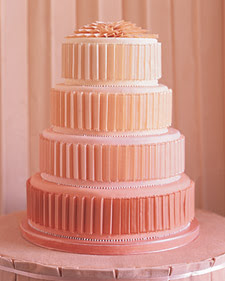 The first idea that I had was a pale pink round cake with a very sharp edge. It would be flocked with a garland of petally flowers, these wold be a mixture of slightly old-fashioned, large wavy, frilled petalled flowers with pale yellow stamens in the middle, think freesias, gardenias, sweet peas. I've seen a version of this cake and what makes it beautiful is that the flowers are different but similar shade of pinks, rose-reds, lilac pinks. The whole cake is monochromatic. Sort of like a sophisticated Cath Kidston look. The cake layers can be chocolate, or lemon with raspberry flavoured pink buttercream. 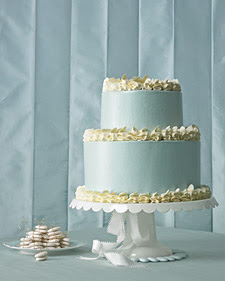 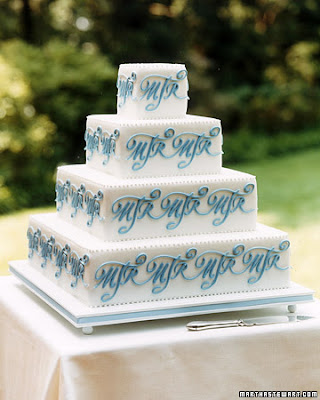 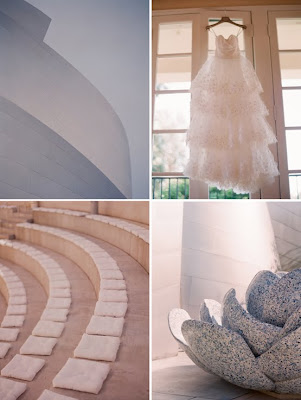 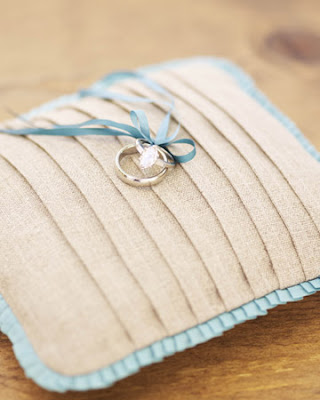 The second idea is a round pale blue cake, with white pansies. These pansies have soft petals and frilly inside petals, with dramatic textured black centers. The cake could be a pale teal Tiffany blue or a sky baby blue. The cake could also be rimmed along the bottom (if light enough in blue) with a pleated tan leather ribbon. This cake is like a modern Martha Stewart look. The inside of the cake is a dark chocolate. 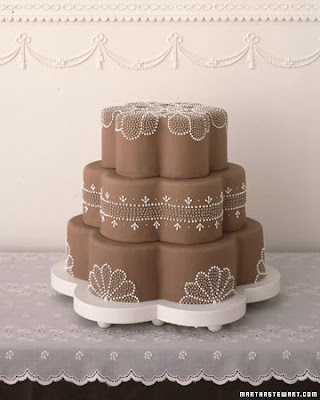 The third idea is a light tan coloured cake. This colour is probably best described as taupe, or mauve. The pansies are still white, feathery and with textured black centers. They are meant to pop on the cake. The cake lends itself well to swiss dot decorations in white, too. The cake is still modern, but now modernist, stylish but not sweet. If it is done in buttercream, the cream is flavoured with salted caramel and the cake layers inside are chocolate. The cake could be done in a round to look more traditional, or a square to look even more modern. These second and third ideas are a bit simpler in terms of "flower execution" because there is basically just one type of flower. 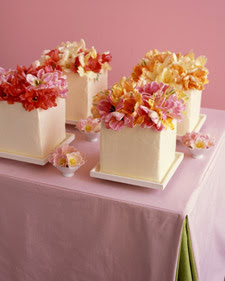 The fourth idea is fashioned after these parrot cakes. The cake is a tall square cube, frosted in a pale buttercream yellow lemon and topped with an explosion of red and yellow parrot tulips and sweet peas. The colours are bright and a little clashy, so it will probably wind up being challenging from a colour-control point of view. The cake underneath would be a lemon poppy seed, layered with lemon curd or raspberry puree. 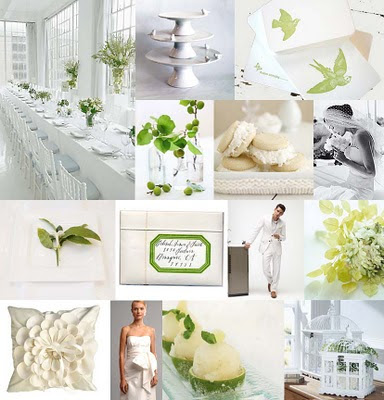 The fifth cake is a pure bright-white cake. The flowers are slightly fantasy pansies, they have white petals but the insides frills are kelly green, with a textured white center. There aren't these flowers in real life but it's sort of an inside joke, like painting the inside of your white kitchen cabinets green. The challenge is definitely keeping it real-looking, with just that bit of shock effect, I guess that means the colour has to be just that right shade of green (ie. not too artificial). The cake is meant to look fresh and fun, it's meant to sit on top of a white and green checkered gingham. The cake could be dark chocolate on the inside but it could also be lemon poppy seed.

What do you think?


For those who have no idea what these flowers are, a sampling of the kind of stuff we made in the first class: 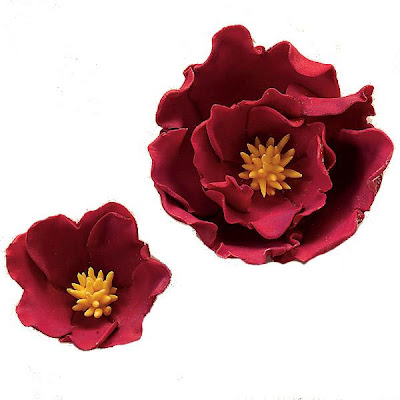 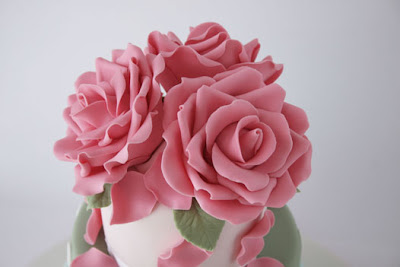 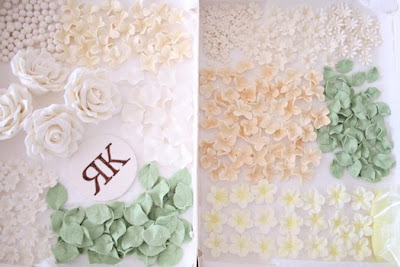 I love the idea of the taupe cake. I love browns as far as decorating goes, I think it's modern and earthy at the same time. And if flowers are the theme, earthy is good! I also think that black and brown are very forward styling concepts. Kudos to all your ideas. They are great. I enjoyed the post

I'd go for the white cake with the green inside flowers. It sounds clean and fresh and like it could be quite pretty.

How does sugar paste taste, by the way? I'm always worried that pretty doesn't really equate to tasty.