There is a cluster of restaurants atop Duxton Hill which, I feel, is rather underrated. My sister though quite highly of The Universal, and although I didn't think BROTH was all that great, it wasn't bad, and there are a number of interesting-looking bar/restaurants in the vicinity (not the KTV lounges, though). 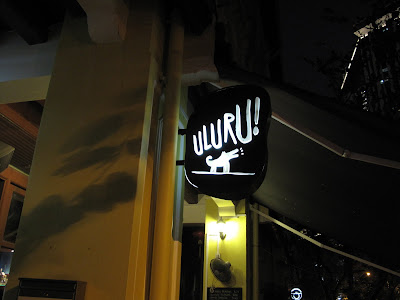 Uluru is one of the antipodean restaurants (the other being BROTH) on Duxton Hill, and they serve Australian cuisine, as well as burgers, steaks, and other carnivorous offerings. 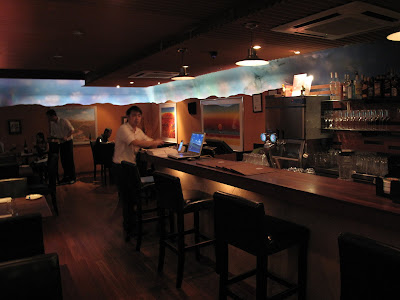 No Australian eatery would be complete without a watering-hole, so Uluru is well-equipped to meet all your imbibing needs with a generously-stocked bar. 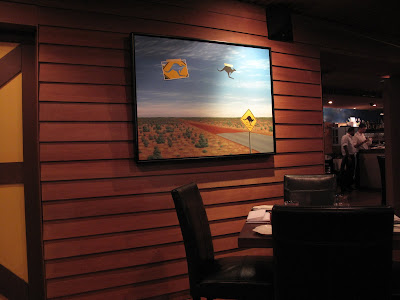 Just in case anyone needed a reminder that they were in an Australian restaurant, the walls are helpfully painted the dusty red of the outback, and the walls are festooned with paintings portraying "Kangaroo crossing" signs, and other scenes that are evocative of Australian culture. 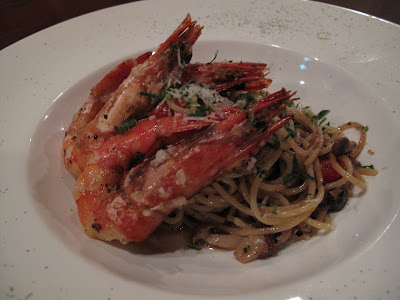 The menu at Uluru is actually pretty extensive, and as you'd expect from an Australian joint, both surf and turf dishes make an appearance, as this prawn spaghetti aglio olio with shimeji mushroom broth illustrates. The pasta was pretty decent, though I'm not sure about the combination of aglio olio and mushroom broth: it seems like the worst of both worlds as the broth waters down the pungency of the garlic oil, while the shimeji mushroom broth was not particularly flavourful. I liked that the helping of prawns was quite generous, though. 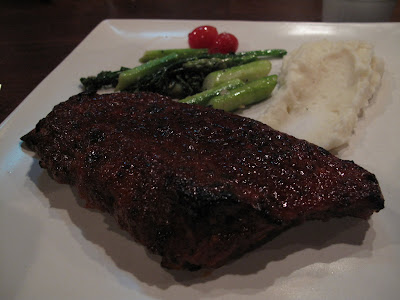 I was rather disappointed by my rack of ribs, unfortunately. I was expecting a full rack or at least half a rack of ribs, but received only a third of a rack, which was not at all substantial. 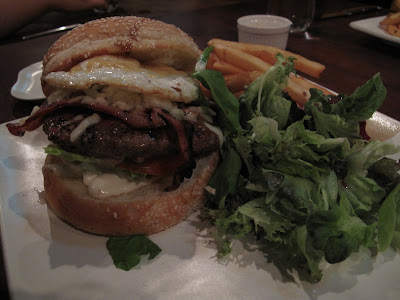 The Uluru burger, on the other hand, is a filling affair, with a juicy, mouth-watering patty, lettuce, tomato, bacon and a fried egg sandwiched in a soft sesame bun with mayonnaise and Dijon mustard. Personally I think having the bacon and egg is something of an overkill, but then again I'd prefer to clog my arteries with this rather than something mass-produced for Carl's Junior. 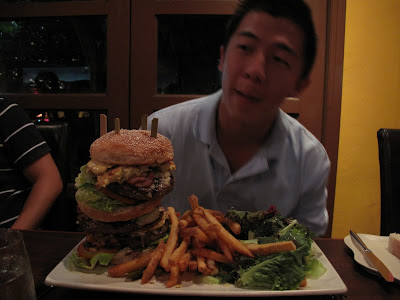 In terms of calorie content and heart-stopping potential, however, the Uluru Burger has nothing on the monstrous Ultimate Burger, which is a vast, towering beast of a burger that also comes with a cornucopia of fries and salad. 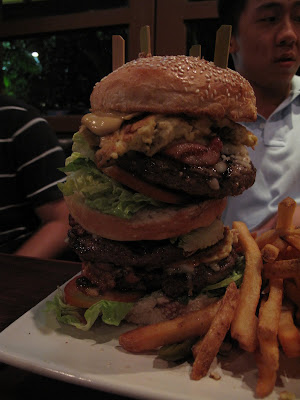 Here is the beast up close in all its magnificent glory. Three 200g patties are double-decked with tomatoes, lettuce, sauteed onions, two mushroom omelettes, gherkins and jalapenos (just to make the burger harder to eat), and if you can finish all that, plus the fries and salad, in 30 minutes, the burger is absolutely free.

Just to prove that the Ultimate Burger challenge can indeed be done, here are pictures of one of the challengers cleaning his plate, with just his fork and knife, in about twenty minutes. 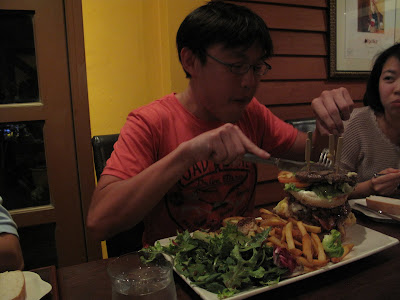 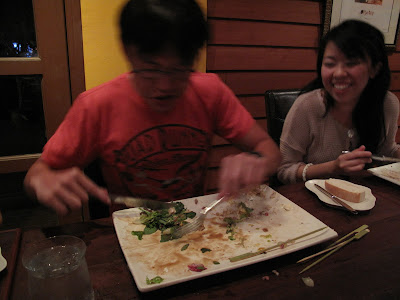 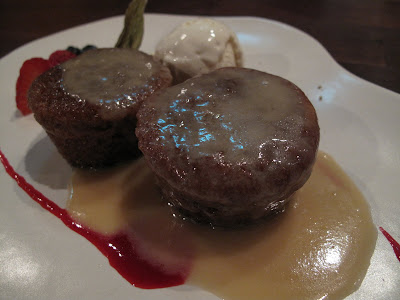 If you still have space for dessert, Uluru, true to its roots, serves up a faithful rendition of sticky date pudding slathered with butterscotch sauce and paired with a fairly neatral vanilla ice cream. The puddings were surprisingly light, but quite tasty, so it was a pleasantly dulcet end to the meal.

Uluru is a great place to come to with a large group of friends, and the Ultimate Burger challenge is a surefire way to keep the whole table entertained. With its impressively extensive menu, there'll definitely be something for everyone to enjoy at this laidback, affable eatery.

Hey, great and detailed post on Uluru! Time Out magazine is actually featuring them at their tasting event next week (Epicurean Soiree II... with one on the bund and krish and stuff!
http://timeout-epicureansoiree.eventsbot.com