There was an article in the papers recently about how eateries are increasingly doing a roaring business in breakfast. The eateries featured were things like McDonald's and KFC, though, which serve breakfasts for on-the-go types. 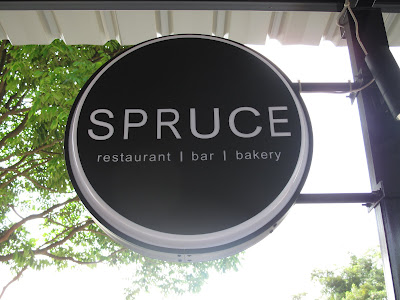 A whole different set of restaurants caters to those who enjoy a slow start to the weekend by rolling out of bed at 10 or 11, throwing on something comfortable, and setting out for a leisurely brunch with good company at a quiet, tranquil and preferably wooded spot. Places like Mimolette and Rider's Cafe fit the bill, as does Spruce at at Tanglin Road. 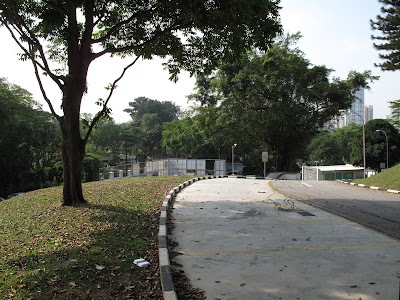 Perched atop a hill, the Phoenix/Ridley Park area within which Spruce is located is deathly quiet on Sunday mornings, which is a nice change from the hive of activity which is Dempsey Village. I came for breakfast at about 10am, which is a good time, as it allows you to have a bit of a lie-in, but also ensures that it's not too hot when you finally decide to venture out of the house. 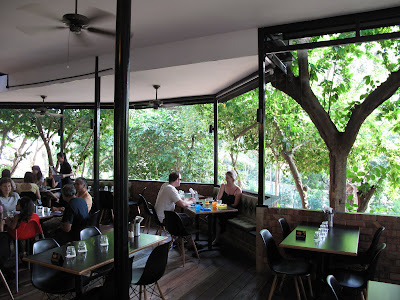 If you are an earlier riser, it might be pleasant to sit out on the verandah, which overlooks a children's playground and makes you feel like you've got an entire day to while away sipping tea and nibbling scones. 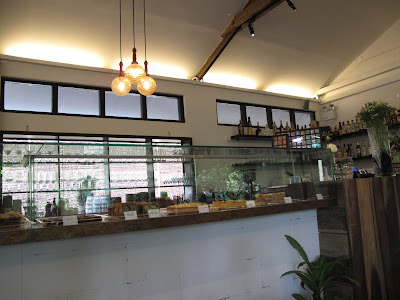 Not willing to brave the heat and humidity, I chose a seat inside, in air-conditioned ease, which also gave me a good view of the spread of cakes, cupcakes, muffins and other fattening things you can order off the counter. The counter also doubles up as a bar, so you can start your morning with a whiskey on the rocks - breakfast of champions. 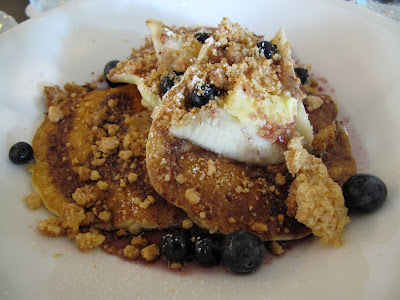 When I was young, almost every Sunday my father would take us to McDonald's for the hotcakes breakfast, so whenever I have brunch on Sundays I tend to associate that with pancakes. The blueberry and banana pancakes, however, were something of a disappointment, as the pancakes lacked body and as a result were rather too soft, falling apart easily in a mushy mess once blueberry honey had soaked into the them. I wasn't sure I liked the biscuit crumbs that had been mixed into the dish, either... they created a different texture, but I found them slightly distracting. 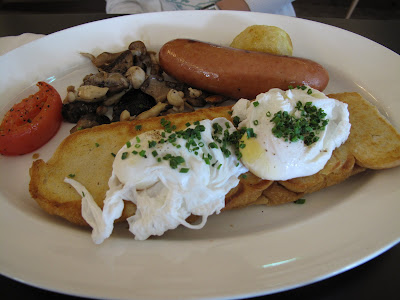 The big breakfast was also a let down, as the poached eggs were overcooked: the yolks were no longer runny and the whites had solidified to firmness. Also, what is it with breakfast places that refuse to serve two eggs cooked in different ways? It may be easier to cook them both the same way, but any restaurant worth its salt should not have that much difficulty cooking them separately in different ways, especially if it makes the customer happy. It's not a very big deal to me, but I imagine some people get a kick out of eating one egg hard-boiled and one egg soft-boiled, and why should that be so hard to accommodate? 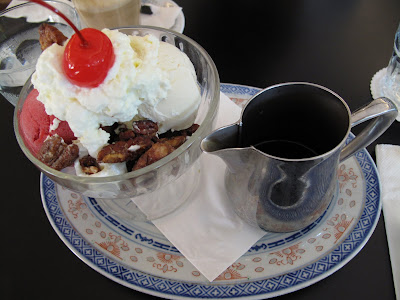 The ice cream sundae is a calorie-laden affair, with a vanilla bean ice cream nestled up against an intensely tart raspberry sorbet, topped with whipped cream and with a basement of chocolate brownie and macadamia nuts waiting to be excavated by the greedy diner. Against the backdrop of all that sweetness, the sorbet was jarringly sour, and there were too many nuts and not enough brownie for my liking, so I only had about a quarter of the sundae.

Overall, in terms of breakfast, I think Spruce compares unfavourably to Rider's Cafe or even Chalk, though perhaps it might perform better for lunch or dinner.

*Note by Weylin: I've been to Spruce on a few occasions. Although their big breakfast is not that good (I would vote Graze's big breakfast or even Jones as the best), their tuna tartare (with salted avocado and toast) and prawn pesto pasta are excellent.

Nice review on the new place. Thanks for introducing it.