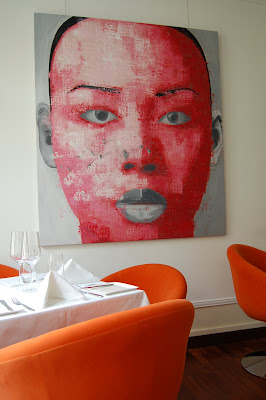 E. and I wanted to find a restaurant for a dear friend's birthday lunch and we stumbled upon (well, led really, by Chubby Hubby's enthusiastic post) The Universal at the Duxton Hill Conservation Area. This was new, sounded like a good experience, was suitably upmarket and was pretty near to our office. Though I did grumble the way there about the scorching Singapore heat.

The decor at the Universal reminds me of Auguste in Paris, which is helmed by Michelin-starred Gael Orieux and boasts a similar contemporary design and paintings. The opening picture is The Universal and this picture is from Auguste.

The only difference is that the paintings in Auguste are of the Bamiyan Buddhas, whereas in The Universal, they are the work of a talented local artist and are actually for sale. 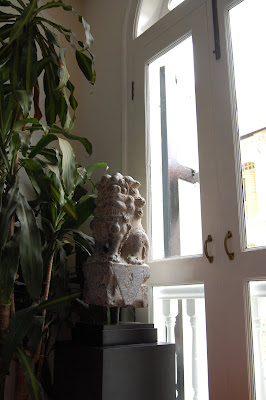 The restaurant really is lovely, it's a beautiful, hidden, shady part of Singapore and the renovation of the shophouse has transformed it into a sun-drenched, cosy space. The wine bar is on the ground floor and there are more than 500 labels from 1937 onward. The narrow flight of stairs leads upward to an intimate dining area on the second floor, which accomodates about 35 people. We ate on the mezzanine level which is a good place to have a smaller party of about 4 tables. 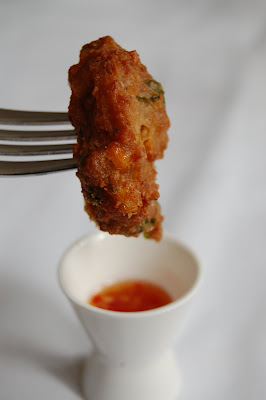 We had the 3-course lunch sets which I believe were priced at about $34. The chef sent out an unusual amuse bouche, it was like a tropical chicken macnugget, with a thai chilli sauce in the little egg cup that held it. For starters, the others had the Pan Fried Foie Gras served with port wine jelly, dried fruit compote and brioche and I had the Jerusalem artichoke soup with grilled scallops. 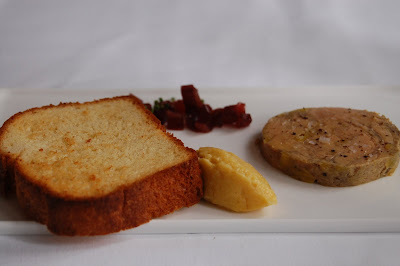 I was surprised, the interior of the restaurant was just that little bit pretentious and we were the Only Table on the mezzanine level, leaving the staff to fuss over us like mother hens. I must admit that despite their good and most importantly, Warm tomato bread, I was secretly wondering what the food quality, especially of the work lunch, would be like. 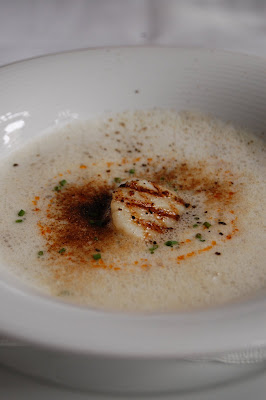 The soup was delicious, full of artichoke taste and with thick bits of artichoke still submerged in the soup. I usually don't order scallops in Singapore, finding them to be skinny, charred affairs, but these were actually juicy and not fishy at all. The soup was well-presented with a real interesting mix of colours and it was still piping hot. I was impressed, both by the soup and the foie gras and at this point, started feeling cheerier about the meal and the walk in the sun to get there. 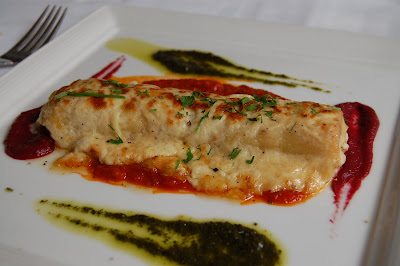 There wasn't much variety in our main course orders either, although having looked through the menu, I'm definitely coming back to try the pasta dishes, especially their gnocchi. C. had the Beef Tenderloin wrapped with Procuitto Ham and topped with Oyster Fritters and Asparagus accompanied with Béarnaise Sauce and E. and I had the Cannelloni Beef Gratin with Fontina Cheese on Tomato Sauce. What is that? That would be a rolled lasagna. 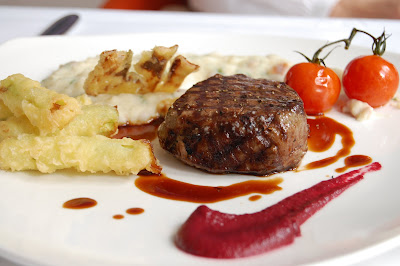 When it came, I was even more impressed. The main plates looked like works of art! Gorgeous colours! And it wasn't just the colours, either, the beef tenderloin was excellent, still tender and juicy on the inside, while the tempura-ed asparagus was bursting with flavour. (If you look up the Singapore Street Directory, you'll see that they wrote, "the beef tenderloin is done to perfection, retaining the efferverscence in the inside" which is just putrid and impossible- hello, efferverscence? In Steak?

Ah, I digress. I was on the subject of how their mains looked like works of art. That was the prettiest rolled-up lasagna that I've ever eaten. It didn't taste half bad either. It was a cheap main for a set because the meat is just ground chuck but I still had a good time. 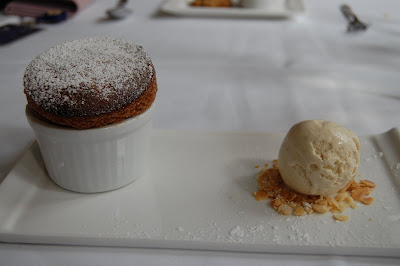 The desserts were the Chocolate Souffle with Vanilla Ice Cream (it was telling that they didn't bother to describe it as French Vanilla Pod Ice Cream, which it was clearly not)and the Coffee Creme Brulee with Raspberry Tarte. Both were not bad, if nothing really special. I think if I had to point to one weak point in the set menu, it would be the dessert. The lack of creativity was a pity because the appetizers started the meal so strong. 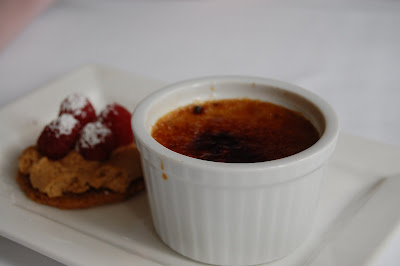 The Chocolate Souffle was a little dry and crusty, although it had risen in it's expresso cup. The coffee creme brulee wasn't bad but it was a little too solid for a creme brulee and the raspberry tarte was a bit of a sad affair, sort of marooned fruit-on-a-biscuit beside the souffle cup.

I would definitely go again, in fact, I fully intend to and you need to go too, to support this great restaurant and talented chef. It didn't look that busy when I was there so maybe they need to revitalize their lunch set price (hint) but I'm sure on any weekend, the place should be jumping with its hip, intelligent persona.