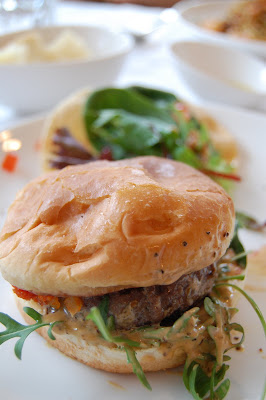 I was thinking it'd be nice to put up posts chronicling my visits to some of the places I mentioned in the Singapore Summer: Where to eat list here 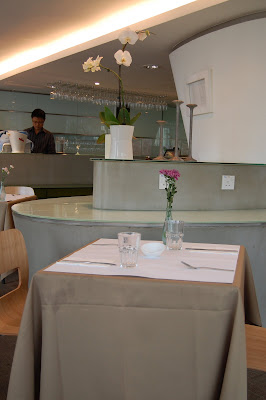 I didn't make it through all the places but I did take the chance to bring my family to the restaurant Wild Rocket at Mt Emily. I've been here a couple times of late, in part because of ChubbyHubby's recurring praise of Willin's Wild Rocket burger. I am a big fan of burgers, mostly of the greasy, bacon-y kind like those from In 'n' Out. 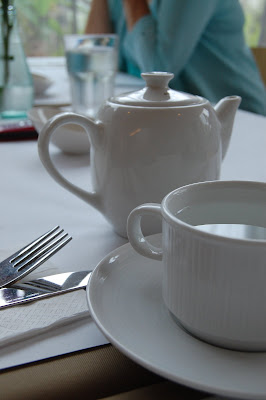 I had first been here when the restaurant opened and that was a pretty long time ago. Then one day, I had a craving for a burger lunch and came back here and discovered the very affordable three course set meal, which includes the burger, among other choices of mains. I had also met the chef, Willin, on a previous occasion and this time, again, he came by to chat with our table. Later on, after the meal, as we were pulling out of the parking space, Willin came flying up the driveway. I thought we had forgotten to pay! 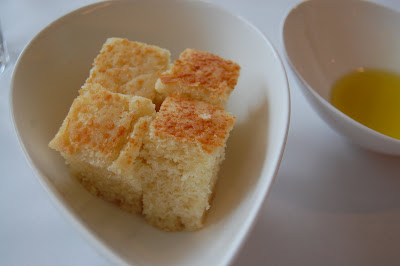 "Wait!" he cried. "Tell your brother, I don't use MSG in my soup!" Apparently, while we were eating, he had looked up this blog and realized that this was the home of this much earlier post here and that he had been waiting for us to come back.

The picture of Willin looping up the road in his chef whites was pretty funny. He is a really nice guy. And yes, ok, so now you know, from the chef himself, there is No MSG in the mushroom soup, nor any of the rest of his cooking. I must also say, that in the time I'd been away, the menu and food in the restaurant has gone from strength to strength and the individual flavours and textures in his cooking really shone through in my recent meals. 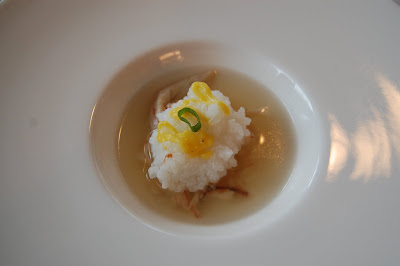 On the last meal, we had a complimentary amuse bouche of what looked like teochew porridge (I believe it was deconstructed crab porridge) and several appetizers- the marinated salmon carpaccio, the pumpkin salad, regular salad and the mushroom fritters. 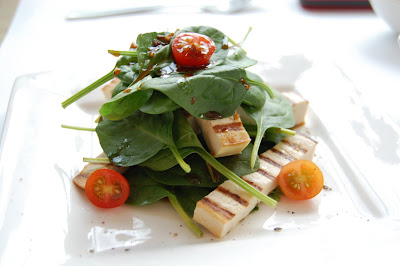 While they were all very good, I have to say the mushroom fritters were the yummiest. Fried in a crisp batter, they exploded in warm mushroom juices and were drizzled over by a slightly creamy, mustardy aioli that really enhanced the savory tastes. 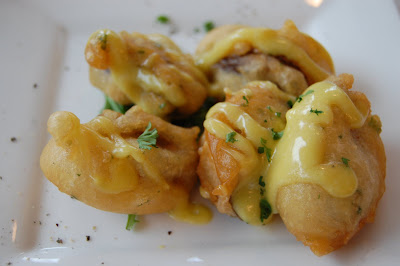 For the main course, I had my burger. It comes with pepper aioli, arugula and sundried tomato relish. The patty and the bun are about the same thickness and it was well-grilled on the outside but still juicy, pink and soft on the inside with a slight tang of onion and marmalade. This was probably the best choice of all the mains there, unless you are really craving the signature laksa pasta. A rude shock awaited those who tried to be too creative. 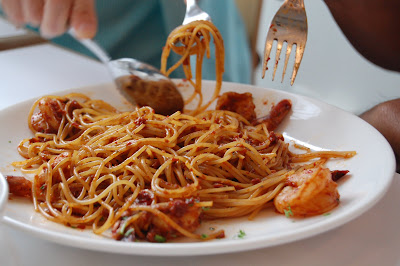 The other versions of local pastas wound up being searingly hot, too hot for many on the table! Even those who love spicy food found the combination of hay bee and more hay bee (local name for chillied prawn paste) such that they couldn't eat the dish and couldn't taste anything that came after. We also had another seafood-based pasta and the recipient of the dish picked out the prawns, saying they didn't taste fresh. 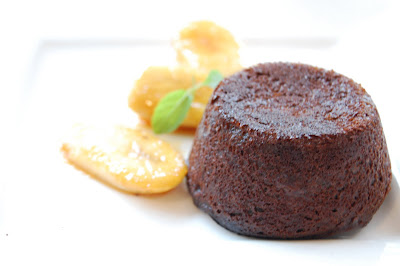 We sampled a whole bunch of the desserts, my mom had the black sesame paste on coconut ice cream and some others had the Dark Lave Chocolate Gateau and the sinful looking Oreo sundae. 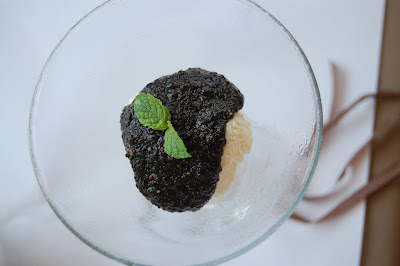 I always go back to one default dessert and that's the Kueh Boloh tiramisu. I must say, it's a case of nostalgia. When I was little, every Chinese New Year, my grandmother used to make cookies for my brother and I. (For the full story, read the entry on sugee cake in "My Malaysian Roots") My brother loved Kueh Boloh, so as a result, my grandmother would make tins worth. These great round yellow metal tins, with green rims (yeah, south east asian children, you know the ones I'm talking about) and the sponge cookies would be stored between layers of grease-proof paper. 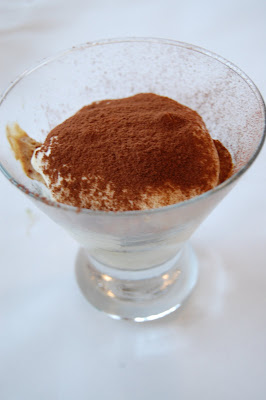 Willin has said before that fusion shouldn't be confusion, that fusion should not be a clash of tastes but a combination that just makes the food interesting and clever, like how learning is sort of recognizing something you've always known but in a new way. (I paraphrase from Doris Lessing but he really did say something similar) I couldn't agree more. When thinking about his restaurant, I deliberated on whether it was a "So Good it's not Fusion" restaurant, or as I finally categorized it, in a nod to his admirably youthful passion and the incredible potential for Singaporean cooking that I see in his food- "Young and Hip in the Suburb". 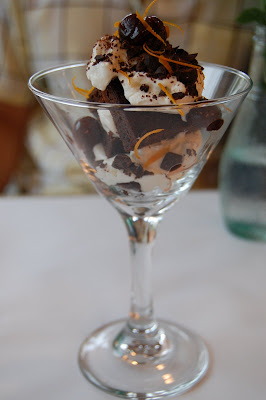 Again, as I mentioned in my previous post, the meal seemed to find more favour with the young at the table. I'm not sure why. I had a great time and a great burger, so I'd definitely recommend the restaurant, especially since you now know what to order. Everyone did agree though, that the meal had been generally pleasant and that the atmosphere of the restaurant is truly beautiful and relaxing.

I was too hungry to jot down the exact prices but you can expect to pay perhaps $18 for the pastas and $9 for the desserts. Alternatively, go for the lunch sets and top up for your choice of dishes. Or go for dinner, then adjoin to the wonderful bar, Wild Oats next door, in the old colonial bungalow. I sheltered there with friends one rainy Singaporean night and the indoor area with its mod furniture, pink flowered walls and fringe is as charming as the windy, al fresco, come-by-my-garden seating. This is the house by night. 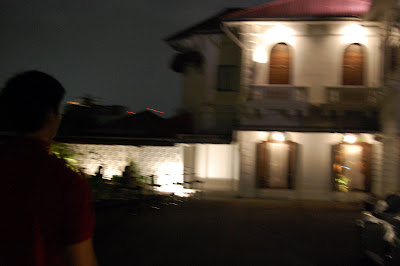