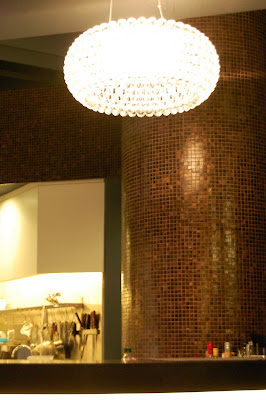 It's summer, so there really are a lot of visiting friends. I got a chance to check out Macaron, the new hip dessert restaurant, with some colleagues and a surprise college-friend guest. Thank you, JS, for the lovely dinner and the chance to meet up! 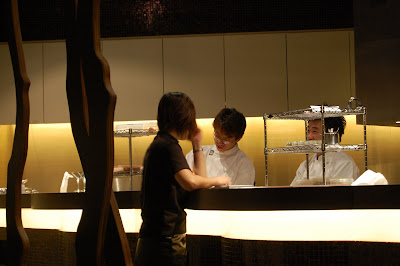 On first sight, Macaron looks like your typical sleek, black cat of a restaurant. The location is intuitive, right next door to Chef Pang's Canele, his show-stopping confectionary in Robertson Walk. The lettering of the restaurant name, back-lit and cut out of a metallic copper plate, is minimalist and subtle and the sparse decor of the place was darkly pretty. Unfortunately, that effect was a little marred by the exposed ceiling (you know, those plumbing sucking vent pipes) and the neither-here-nor-there cement floor. The lighting also made photography very challenging. 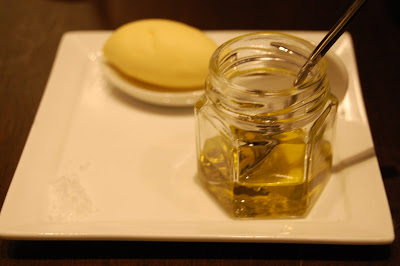 There is also something wrong with the prix fixe menu. It gives you a choice of 4,6,9 and 15 courses. The problem is that the 4 course meal, does not have a main course. You basically get to choose an appetizer + three desserts. I don't know if they realize how cloying and dessert-heavy a combination that is, plus of course, this means that if you go there for dinner, it's a con to get you to upgrade to a 6 course set and you have no choice But to eat a big meal.

There is an ala-carte menu but there's no ala-carte ordering. What I mean is that there are prices for each item but these can only be added on to one of the prix-fixe menu, ie. you can't put together an ala carte choice of a meal. Considering that there is no common theme in their desserts and the flow from one dish to the next is not seamless, I don't see the point in disallowing people to put together a 3 course meal or whatever combination of dishes they see as managable and desirable to them.

When I asked the Les Amis group about it, they said it had been Chef Pang's choice to direct people's experiences and not to disturb the creative flow of his ideas. While I buy that, I also think that a dessert restaurant is already such a niche idea- is it really necessary to make it so inflexible and unaccomadating as well? The whole idea is to draw people in and introduce them to this type of dining. I could well imagine less exposed diners being peeved at the the maitre'd's rude, aggressive and somewhat gleeful "there's no ala carte". Also, it doesn't welcome all those essential customers who wanted a small meal or an in-between meal snack. 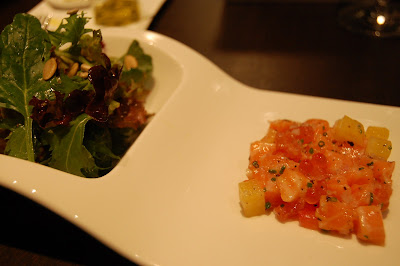 The appetizers were good. I had a King Salmon Tartare with Pineapple, which sounds like an odd combination, but it was excellent. We also had the Pulpo - an interesting creation of sautéed potato with octopus and paprika air (foam). The one let down was the olive oil cake, where we were actually expecting something resembling a traditional olive oil cake and got a salad with some olive oil-ed croutons. Not that impressive. 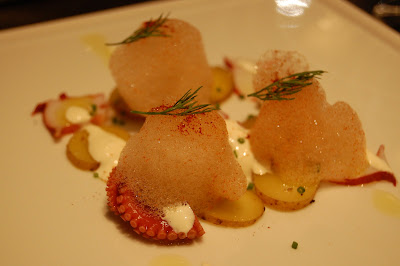 The mains are a bit hit and miss. I've heard that the pork belly confit (served with a side of apple mashed potato) is delicious and the pork belly is crusty and onion-y. The main that most of us tried though, the mentaiko pasta (and the real reason we were there, having read Chubby Hubby's post which piqued our interest), while not bad, was awful heavy, it was like some beginners carbonera with ikura. There really was ikura too, sprinkled into the oily cream-based pasta sauce and on the fat noodles. 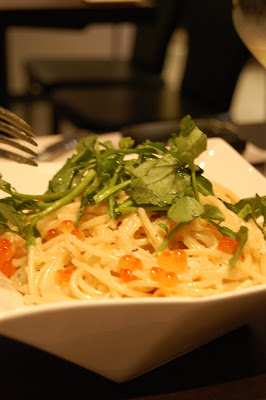 Before the meal, one of my hungry colleagues asked the server if it was a small portion, in which case, he was intending to and did, order two servings for himself. I thought it was a bit cheap that the server immediately said, in a brush-off manner, yeah, very small. Really, when the dish came, it wasn't that little and he could have mentioned that it was extremely creamy and heavy, rather than just pushing him to double his order, which he eventually couldn't eat anyway. 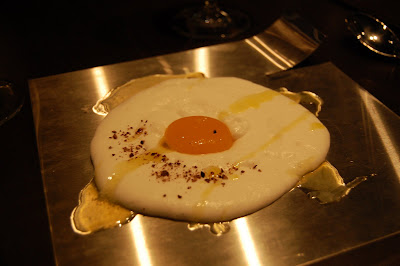 This is the "sunny side up" that my colleague ordered, a coconut egg white and passionfruit egg yolk, with olive oil and cocoa masquerading as pepper. 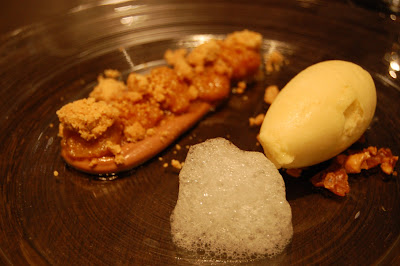 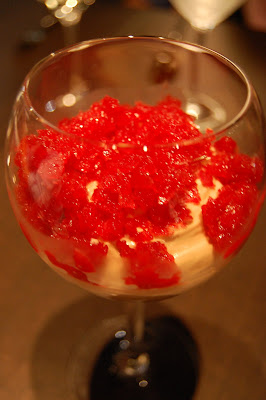 I chose the raspberry granite for my 4th course. The dessert came in a bowl glass and the "granite" was like macerated rasberry which had taken on this great ruby colour. Below it was a generous whirl of milk chocolate foam, hazelnut praline and nougatine. The thing is, by then my taste buds were so saturated and sticky that the foam didn't taste like foam but cream. The dessert was good but it was also heavy, rich and generally, overwhelming. I think the key word was really "overkill" by this point, as we were stuffed from the main and the first dessert but to be fair, what I tasted of the raspberry granite Was good. 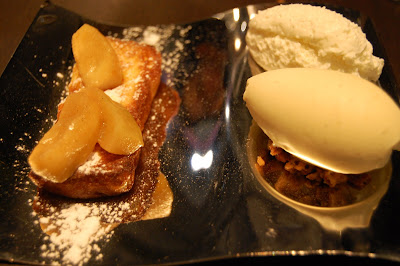 For my dessert grande, I had the pain perdu. This was satisfying, although a little plain, the french toast was comforting and well-made. 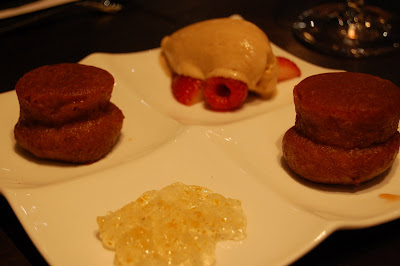 This is the other dessert grande at the table, I think it was the Grand Marnier Tea Baba, the others had a One, Two, Tea for their 5th course. This came in a chocolate egg which contained chocolate cream and a pretty, pink rasberry espuma. I think where the chef and the restaurant both deserve credit, is that the cooking is inventive and artistic. Although you could probably figure it out, it's still fun to gawk over the arrival of each dish and wonder to yourself exactly how he had structured, for example, the chocolate egg. It somehow makes you feel like you're paying for the uniqueness of it all and his effort at assembling what you're about to eat. 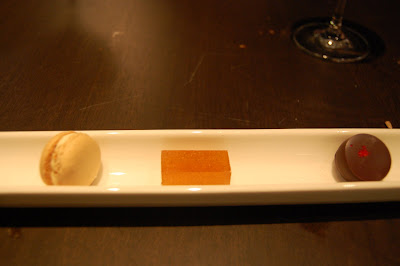 The last course was the petit fours which were a rich tiny slice of chocolate, a baby sized truffle macaron which was excellent and a citrus yuzu gelatine jelly sweet. By then we were too sugar-exhausted to think about any judgement on the standard nor substantial-ness of petit fours but thinking back, they were good. The meal was an experience alright but it was just...too much. Somehow I felt the subtlety had been lost in the myriad of tastes, both sweet and savoury and despite all that sugar, I didn't walk out of the place feeling happy.