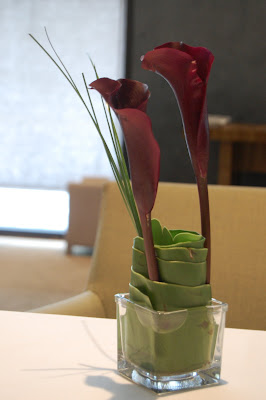 This was a very interesting question that came up a couple days ago during one of those random late broken-telephone tag conversations. My best response is that probably, magic only happens when you're not looking for it. Also that magic, by definition, is and should be, rare.

And I meant all that but it was you know, midnight jazz. And as if to express myself in a more prosiac way, I started typing this post.

One day, we should have a very contentious poll- ask the food lovers, is it easier to find magic in food...or magic in people? For my part, I wanted to write about a pretty magic meal but also about how magic in food, is often not magic at all. It's the culmination of a lot of effort. Pretty much like every other kind of magic, it's really about the persistance, the love, the dedication, the investment that goes into achieving consistency, teasing out tastes and textures and binding the whole into a seamless creation of something that is delightful yet in a way, not at all spontaneous.

This post is about a meal at Les Amis, the outlet at Shaw Center, which is the timelessly stylish first-born of the Les Amis Group. Do NOT ask about the prices (you can check the website and have sticker shock before you even get to the restaurant). It is a ridiculously expensive restaurant. That being said, everything about the food was excellent. Par Excellente. And you know, if you are the kind of person who has the luxury of living in Singapore while constantly converting in USD or better yet, the pound, then well, the upside is, it won't seem That Bad to you. 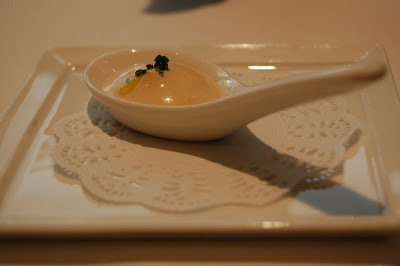 Upon seating, they serve you a small dish, with one smooth cone of butter and one bevelled cone of butter. They serve you a lovely crusty soft white bread and an olive loaf, both are excellent. They also serve you an amuse bouche, today, it was a cauliflower- truffle mousse. Les Amis's amuse bouche and starters are an institution onto themselves. It's the sort of place where you think, ah, foie gras is passe, then you have it in one of their esoteric forms, like the jellied, or soup foie gras and then you think, Holy Shit, that was pretty amazing!

It also cracked me up that, like a fashion designer, Chef Gunther Hubrechsen has dressed the restaurant with a Spring-Summer collection of menu choices. 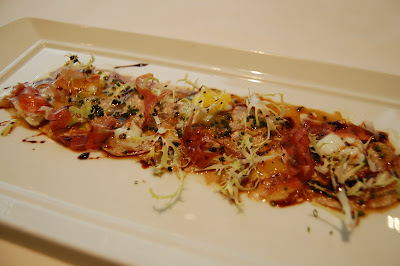 We each ordered an appetizer, a soup and dessert. The main highlight was to be the roasted piglet. I had the carpaccio of langoustine with Oscietre caviar, light creme, chives and extra virgin olive oil from Dandaragan. I've seen Jackson Pollack paintings less pretty. 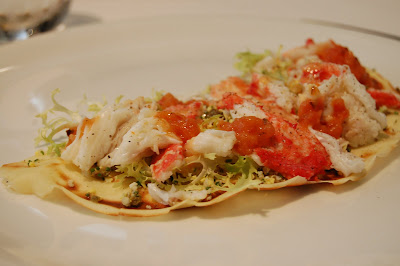 This was the crab crepe, (I'm sure it has a fancier name, but it was specially made for the table). It was pretty gorgeous too. 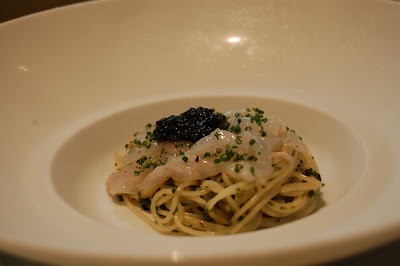 This was the very expensive cold angel hair pasta with caviar and langoustine. It sounds so commonplace, but I can tell you the combination of tastes was pretty sublime. 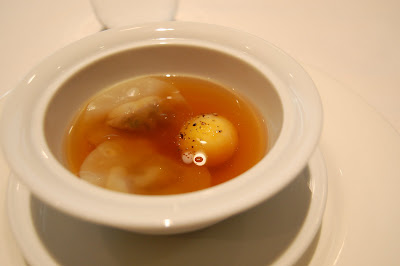 The soup was probably the most imaginative. It was a comforting hot consomme of poultry (er...chicken broth), with a warm egg yolk and fine ravioli. I loved the jiggly little egg yolk floating around in the hot liquid. 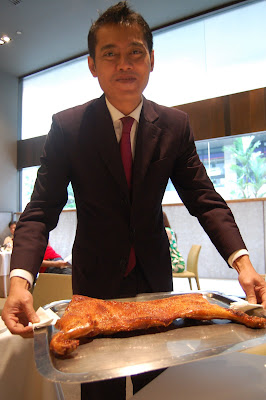 The piglet was yummy. It was lovely. But it was not even so much all those things as it was just stunning, from the way they laid out the little carcass, to the carving of all the smooth meat, paired with melted leeks and a sweet and sour sauce made from Lindemans Kriek Beer. 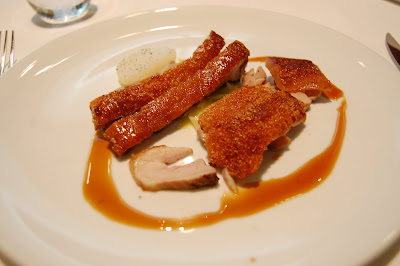 Before we descended from the frothy heavens of taste sensations, there was one more fluffy happy sugar-loaded cloud. You can tell yourself there's just egg white in souffle but haha, who're you kidding eh. 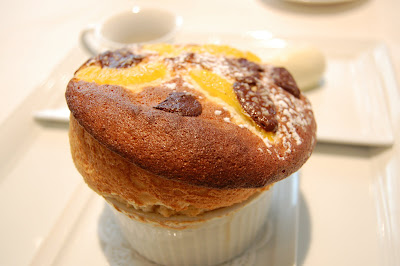 The souffle of the day was a passion fruit souffle, which we didn't fancy, so they made up two souffles, their traditional Grand Marnier souffle with ice cream and the Chocolate with Cherry souffle. 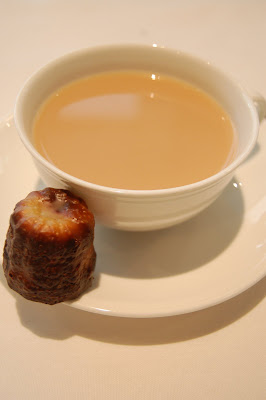 A tea, a canele, and we were off. I'm not a devotee of Justin Quek and generally, I seldom go to Les Amis, it's such an extravagance. The meals I've had there though, are probably the only ones that truly rival the great restaurants in the major cities and have convinced me that the experience really is pretty special. I could try to describe each dish more yeah, but we all know magic...just can't be explained.
Posted by Weylin at 10:06 PM