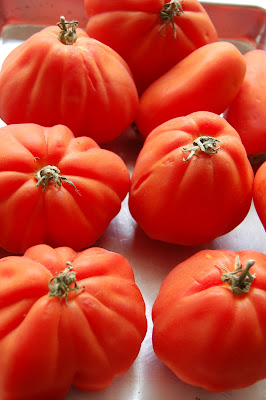 You guys all know that I'm kind of a food traffiker. I wanted to share what I brought back and what I did with the produce from a recent trip to Paris. The first things I bought were Marmande tomatoes. After reading about it in Elizabeth Romer's book, I just had to get them when I saw them, staring at me out of their little folds, in the Avenue Wilson farmers market.

The lady was so sweet, she threw in some Italian tomatoes which I baked alongside the Marmande. My idea was to bake them whole, so that they would preserve their shape and yet be a sitting capsule of warm juice.

Thinking about that hot, trembly tomato was addictive. I started to think about steak, so we bought some 200 day aged prime from the butchers. The difference between 200 day and Wagyu and regular beef? Yes, come on, a test...

Grain fed, refers to the fact that the cow was in a feedlot before being slaughtered. Why is this important? It's because that's when the cow (or calf, depending what you're buying) fattens up and the fat has an opportunity to marble. Wagyu is all about the marbling of the fat, generally speaking, they are at least 120 day grain fed but Wagyu cows are actually an entirely specific brand or type of cow and the marble score of the fat has to be, on a scale of 1-12, at least 6 and prefably higher than 9 to qualify as Wagyu.

So, we had the idea for the tomatoes and steak. Then, I was thinking about this dish I had eaten at Joel Robouchon where he had paired a slimy warm foie gras with whole baked alcoholic cherries.

We had bought some tins of foie gras and duck rillete at the Avenue Wilson farmers market from the lovely old man at the Lafite stall, so for the starter, I wanted to make a fig dressing simple green salad with pine nuts, then serve it with foie gras on crostini and warm cherries. It helped that while in Le Grand Epicurie, I came across a beautiful stack of dark blood red cherries and (thanks Chris!) got some to take home- this is a picture of the de-pitted cherries. I also had girolle mushrooms, so I thought maybe I'd get creative with the side and make a mushroom risotto. 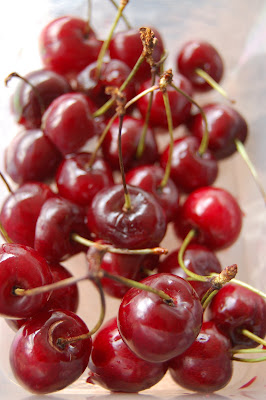 The dessert would be thankfully, made by Colin, who's home for the holidays. I needed to get my panna cotta fix and I just don't have his good hand with gelatine.

So, at about 10am that Saturday morning (this for all those people who say, gosh, doesn't it take forever to prepare a big meal..well, yes and no), I wandered off to pick up some groceries, specifically the beef, a baguette, some vegetables and this massive forest of herbs. The basil was going off a little so I got a huge garden of it free, I wanted to make this beef rub, that called for ground garlic, anchovies, sea salt, basil and parsley. When massaged onto your meat and grilled, it forms a salt crust, that's supposed to be absolutely delicious and smoky. 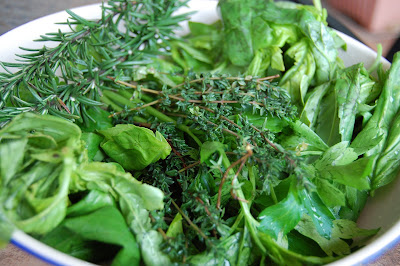 However, that plan fell through, as Colin looked dismissively on the idea and suggeted the more normal rosemary and thyme oven bake (because we didn't want to start a grill, so he felt the anchovy flavour would be baked Into his steak, which was to him, a travesty on good meat...I'll have to wait till somebody else offers a grill to try the former recipe and in the meantime, I made pesto sauce out of the basil and froze that). 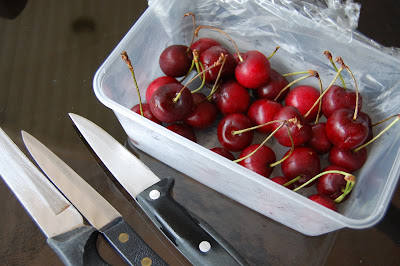 After that bout of grocerying, there was nothing really to do. So I sat on my porch (11am) and thought about de-seeding some cherries. You want to bake them whole and with their stalks, for dramatic effect...but you don't want seeds. Neither do you want a big gaping scar. 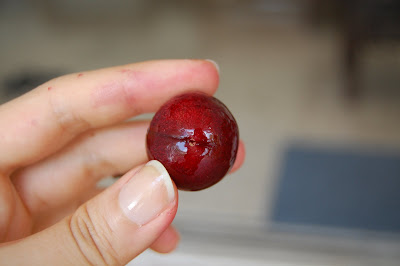 The solution? Tweezers. Slice a small slit in the base of your cherry, like so. 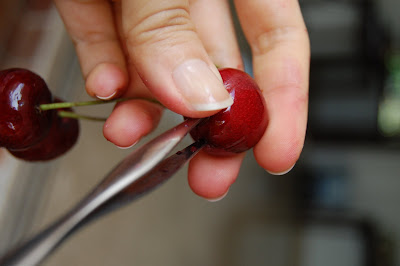 Angle the tweezers in, flip them around and quickly grip and pull out the pit. If you wait too long or fuss too much about, the cherry juice will start to leak out of your surgical hole and drip all over your fingers. It's worth slicing up some cherries to take a look at the anatomy of the seed, it's convex on the top and bottome surface, ergo, it works best if you grip and extract with the tweezers from the right and left side. It's really common sense. 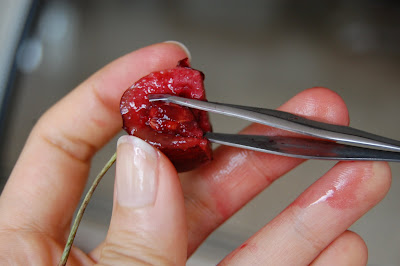 11.30am Messing about with the cherries over. Soak them in rum or port. 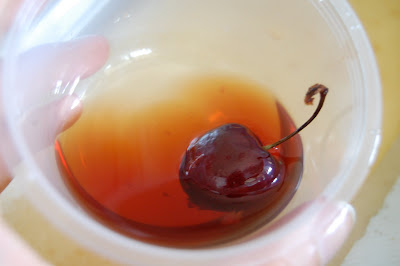 I used my favourite, De Botoli's 8 year Tawny Port from Yarra Valley in Melbourne. This is the most smooth, toffee tasting stuff ever, perfect for Sticky Date Pudding Sauce.

Oh yes and I had decided there needed also to be quick expresso cup of soup in between the starter and main, so I steamed the artichokes I'd bought and blended them into a soup, added some cheese and sliced up the remainder of the artichokes for garnish. While waiting for the artichokes to steam, I pitted the cherries, rinsed the salad vegetables and set the table. We were all done between 10am and by lunchtime at noon.

It should be written into the recipe for dinner parties "Then set and Rest for 7.5 hours". If your dinner party starts at 8pm as this one did, then at 7.30pm, you want to toss the salad in some fig dressing, pour in the pine nuts, shove the cherries, mushrooms, tomatoes and the sliced bread in the oven. This is the secret of cooking for numbers, if you bake, you bake everything at one go. If you steam, you steam the artichokes, whatever side vegetables you serve, the puddings, the desserts, all at one go too. The other secret is dovetailing. 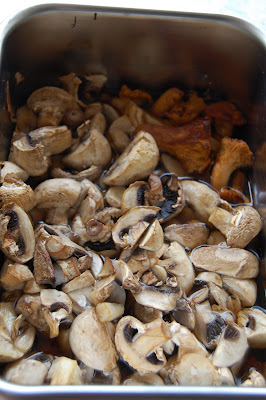 What the heck is dovetailing. Well, it's the secret to all cooking organization. By which I mean, actually cooking a meal in courses, not like a one-dish thing like risotto which is one pot and stir and stir and stir. You get my point. The definition is dovetailing is a technique in algorithm design, which refers to interleaving different computations, performing them, in a sense, simultaneously. Stay with me, I'll explain.

The cheem (complex) way to think about it is a breadth-first, rather than depth-first manner. But forget about that. The common sense way to think about it, is that people assume that a dinner party, that four courses, have to be cooked in a step by step, consecutive order. This is entirely untrue. Dovetailing means that you break down the steps involved in each dish and work out a new order, where the different steps are interwoven such that they can be all be done either at the same time, or in between each other, so that you save time, effort and frustration.

Everything in cooking, can be boiled down to (well, ingredients obviously but in the actual process of cooking..) timing. If you can master that, in the way that you structure and efficate your preparation, then you control the dinner, it takes as long to cook as you allow it to and not the other way around.

One rule is what I already explained- you perform steps in batches. Does it matter that the tomatoes, bread, mushrooms and cherries go into different courses? No. It does not. What matters is that they are all using the same implement (the oven), the same heat and cooking at the same time. You can even re-heat your soup together with all this stuff, in the same oven.

The second rule is probably that you don't ever cook dishes that require the same implement. If you have three dishes, one should be a chilled dish that utilises the fridge, another the stove and another a slow-cook in the oven. Never, never, pick four dishes that all have to be cooked on a stove. You know why? Firstly, most stoves don't have four cooker hobs. Secondly, you will stress out all the people at the stove because there are four seperate things on the boil. Thirdly, you will never serve the courses on time, causing your dinner to run at least an hour behind schedule before it's even cooked.

Probably the third rule should be something like create workspaces in your kitchen. One for the starter (prefably away from the stove, since most starters aren't cooked). Another for the main, which is near the oven and the stove. A seperate plating section for dessert. Arrange all the ingredients, garnishes and plates that you need, for the right number of dinner attendees, spread out in the same space and ready to carry to the table to be eaten. This cuts away at least 20 minutes of wasted ding-donging time when cooking and plating (and trying to find stuff that you never laid out). In supply-chain terminology, this is Lean.

Let's go back. At 7.30pm you have all these things in the oven. Then at 7.45pm, you take out and cool the bread and mushrooms, put the soup and soup glasses into the oven, then assemble the risotto, boiling, on the stove. Cool your heels in the living room, waiting for guests to arrive. If you're gross enough not to have showered before this, please, go shower. If not, play some music, pour the wine, drink the wine. 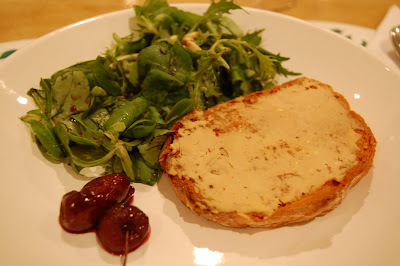 8pm, guests arrive. You go into the kitchen, plate the salad, spread the foie gras on the crostini and pull the cherries, hot from the oven, onto the plates. Turn down the heat, put the steak into the oven. Serve first course. 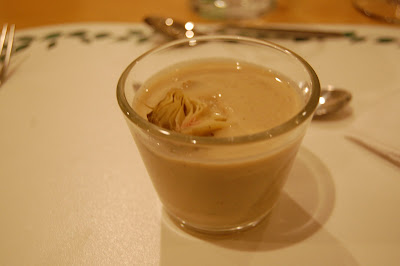 When guests are almost done eating, go back into the kitchen. Stir the risotto and add cheese, butter and basil bunches. Colin looked into the pot and said "How brilliant! You mean this thing can go start-and-stop in its cooking?" Pull the soup and soup glasses out of the oven (the oven is still baking the tomatoes and steak at this point, by the way, in case you haven't been keeping track) and pour into hot little glasses. 8.20pm, serve the soup, second course. 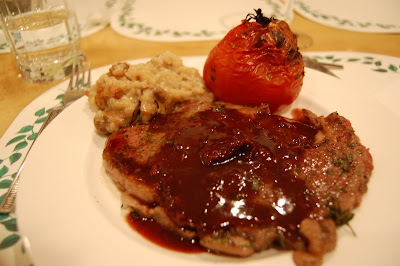 8.25pm Close to done with soup? Your steak has now been in the oven slightly under half an hour at low heat. Pull it out to cool. Stir the mushrooms, now just warm, into the risotto, plate risotto and pull out tomatoes from oven, plate those. Plate steak. Serve steak. This should take the eating from 8.30pm (serving steak) to 9pm (steak eaten). 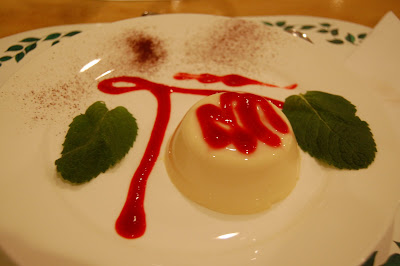 Re-fill wine glasses, switch from red to dessert wine. We served a 1997 Chateau Louis Poyferre and a 1999 Hungarian Tokaji. The last part is easy, it's the dessert. If you chose an involved dessert, say, souffle or sticky toffee pudding, it would just now be emerging puffed and triumphant (hopefully) from the oven. If not, you could also have gone with a citrus light say, lemon cake, already taken from the oven and now sitting in the kitchen, releasing its steamy juices. If not, then you'd be like Colin, unmoulding his panna cottas out of the fridge, dancing some raspberry puree and blueberries across the plates. Bon Appetit! 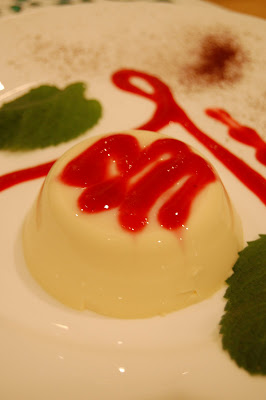