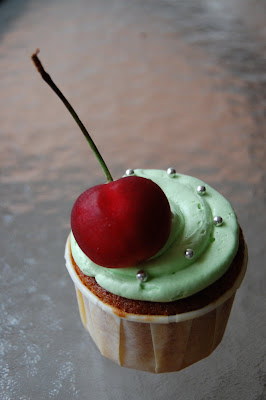 Thank you, Y. for introducing me to the notion. Don't you guys think this is a pretty cherry poppin' cupcake?

Cherries are now in season, yeah, summer! This one is, despite the dark hue, a Rainer cherry, otherwise known as a white cherry (the flesh is white). If you want a lemon cupcake base, please follow the recipes listed here and the two recipes in my previous post about lemon cupcakes (in June archives). I've discovered that despite their slight differences, I prefer Recipe 2. In the coming days, I will post on a savoury use of cherries but below I have the super-easy-peasy recipe for chocolate rum and cherry cupcakes.

I think I've got prep time down to 10 minutes or less, which leaves a good amount of time to mess about with cherries and alcohol. The merenge buttercream is flavoured with green tea, which I thought provided a nice, light counterpoint to the chocolate flavour. If you wanted something stronger, you could make a dark cherry and rum swirl icing. Enjoy! 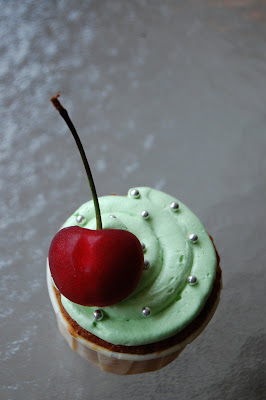 1. Cube handful of cherries. Macerate (soak) cherries in a small pool of rum.
2. Mix the dry ingredients together. Make a depression in the flour, whisk together the egg, oil, vanilla essence and milk and mix in.
3. Mix in the boiling hot water. Stir till smooth.
4. Spoon the mixture into stiff paper baking cups till 2/3 full, adding the cherries in the middle of the cupcake. If you want, you can actually bake the chocolate cupcakes whole, then slice in half and ice them with chocolate ganache and rum cherries.
5. If there's not much rum left from the cherries, you can throw the remaining into the batter mix.
6. Bake for 20 min at 170 degrees C. Wait for cupcakes to cool or stick 'em in the freezer for a little bit.
7. Mix up a batch of buttercream.
8. Mix in green tea powder and a sliver of green colouring into the cream, pipe in fat swirls, decorate with dragees and cherries. Emerge with pleasingly handsome cupcakes.
Posted by Weylin at 3:22 PM