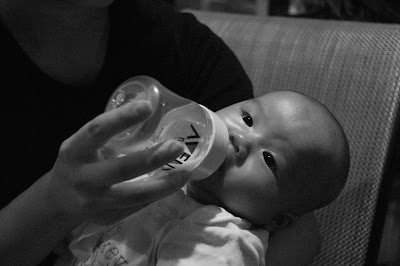 My cousins were due over for a simple home-cooked Italian meal and they had brought my cute baby nephew Joshua. Cooking is nothing compared to burping a baby of spittle!

For dinner, the menu was a simple olive and sundried tomato salad, lasagne, baked fish and tiramisu. I wanted to use the chance to illustrate some of the points that I highlight on the last post about lasagna here. 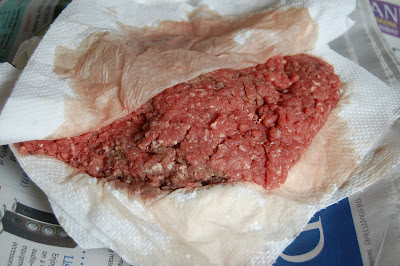 Firstly, dry your meat. The meat needs to be taken out of the packaging and pressed between paper towels, like so. The traditional combination of meat is 1/3 veal, 1/3 beef and 1/3 pork. I use about 80-100g for every person eating. The odori is traditionally celery, onion and carrot, grated or chopped finely. I drop the celery because I don't like the taste and use 3 carrots and 3 onions. 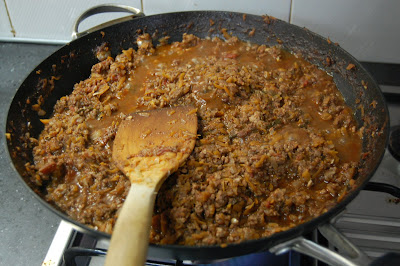 Heat a little olive oil and butter together. Fry the onions till brown and soft, adding fresh chopped herbs. Add the carrot, continue frying while adding the meat. Fully cook the meat before adding any stock or wine, this is so that the meat does not Broil in the liquid.

When the meat is fully cooked, add red wine, veal stock, more herbs, sea salt, pepper and whole peeled Italian tomatoes plus the juice they came in. I used almost a whole bottle of red wine (use a quality red wine, if you don't want the meat sauce to taste cheap and tannic) and also a good sea salt. It does make a difference! I also use a combination of herbs, rosemary, thyme, sage, oregano, basil and parsley...but the most important ones are probably basil, rosemary and parsley. You can cook them in the meat sauce both chopped and whole. 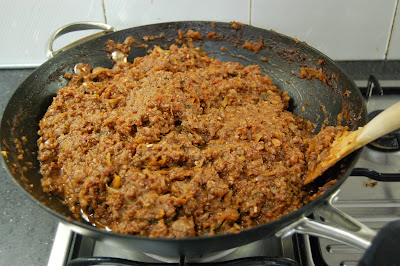 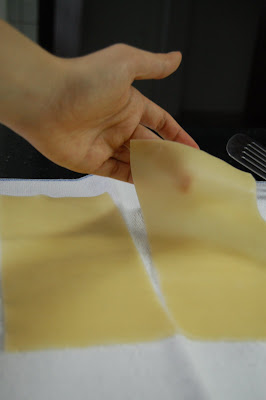 Assemble with layers of half-cooked pasta and bechamel sauce (which is a thickened milk sauce- milk, butter, flour and bay leaf), putting in fresh basil leaves and topping the whole, or the layers, with mozerella cheese.

I've already mentioned this about the layers but I wanted to stress that it's a Meat lasagna and not a Cream lasagna. The reason I say this is that restaurants in Asia tend to be really stingy on the meat, so you get a few crumbs of it, followed by a thick, gelatinous layer of white sauce. It makes for yucky lasagna. The quality of a home-made lasagna is really that it has adequate meat and just a thin highlight of white sauce. A weird quirk, I like using a hard cheese like parmesan within the layers and a soft cheese on the top. Bake for at least 45 min. 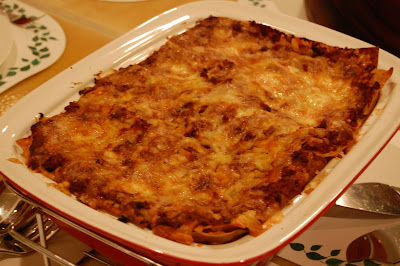 When you serve the lasagne, it's important that your layers are still visible. 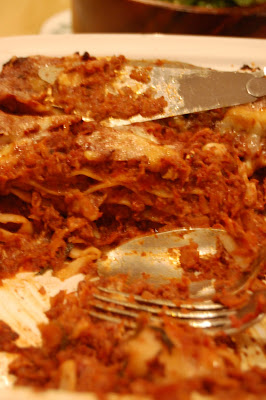 Like so. What it should Really Not Be is that you have melted them all into each other, forming a big piece of Italian mush. 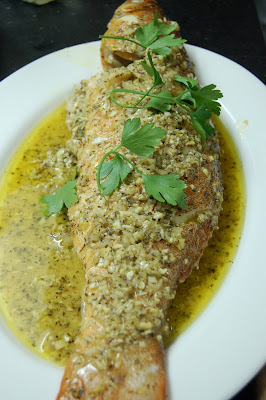 The fish recipe is dead simple. You basically buy the freshest fish you can find (and prefably you know, not a really Chinese fish like pomfret), a garoupa or a sea bass is fine, salt and pepper it and anoint it throughly with herbs. You can line the stomach with herbs and even stuff in vegetables like little tomatoes, squash and those tiny Japanese eggplants.

Soak some saffron in white wine, then pour the white wine and some garlic and olive oil over the fish. Bake but pull it out a little early to check on the texture- the fish will continue to cook while out of the oven.

My brother's posted on tiramisu (and also the entire recipe) before here, so I won't repeat it. except to say that I had a very good one at a friend's house and two things were unique. One, that it was made with a heavy splash of liquer and two that it was made in a large glass bowl with the lady's fingers pretty much vertically arranged, so that you could see the layers through the glass. 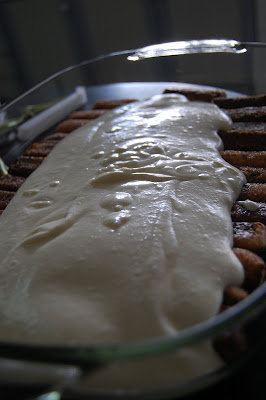 The recipe is very accurate, I just wanted to add that you should whip the cream, the eggs and everything else aggressively, because it does make a difference to the sturdiness and setting of the marscapone mixture. 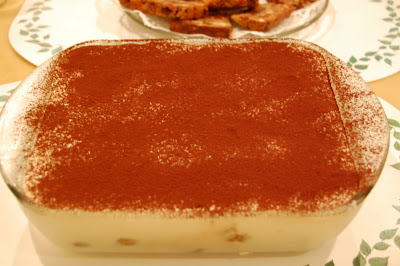 There are two types of tiramisu recipes, the classic soft tiramisu like this one and the recipe that requires whipping the egg (doesn't that sound so naughty Nigella) over a boiling water bath, which will result in a much stiffer tiramisu that can be cut and which will hold its shape. The latter is often found in cheap Italian joints here in Asia because it won't spoil as quickly (think about it, you're semi-cooking the egg) and you can substitute gelatin to make the cake stand. 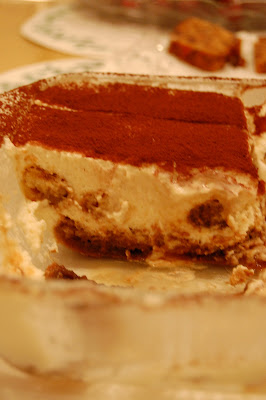 I am biased in favour of the former because I think the taste is fuller but even so, you need to beat the seperate mixtures well because that makes the difference between a soft scoop tiramisu and a soft but slicable tiramisu. Also, yo, there's really very little cocoa on the top, use real dark chocolate cocoa, don't make a great tiramisu, then pour cheap choking Hershey's powder all over it!