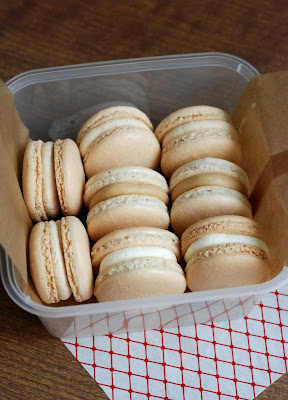 I always joke that when I get stressed, I bake and the more stressed I get, the more I bake but in this past week, that joke's really caught up to me. I was feeling so in limbo, so neither here nor there that I looked desperately around for something to make me feel more grounded, more alive, more joyful. Of course, I could have gone for a super healthy 10-mile run but where's the fun in that? I decided to fall back on an old love, or else known as, baking macarons to surfeited collapse. I couldn't even bear the thought of emotional baking, so I baked in monotone. Literally. 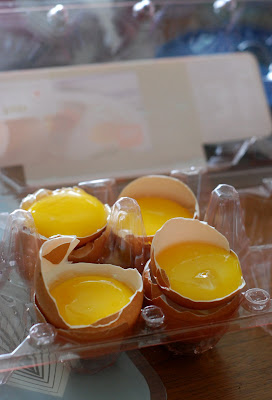 Part of the macaron therapy is that it's such a tactile process, turning eggs, so gooey and fragile that you can pop them with the slightest pressure, into turgid crumbly shells with the smoothest, dryest skins. I love how you can run your finger gently over them, feeling every ripple and seed of almond or hazlenut meal. Other people like to pet dogs, I just like to stroke my little macaron shells. Go figure. 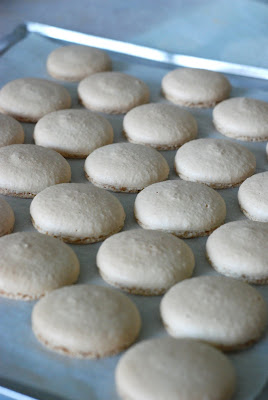 And I can't even begin to explain the pleasure and gratification I derived, watching the butter beat fiercely round the bowl and the meringue whip into cream, then feverishly piping lines of evenly sized macaron rounds. I always think creating these interlocking armies gives me a innate sense of control and order but I think it's really the consuming focus and reassurance of the repetitive motion that soothes. 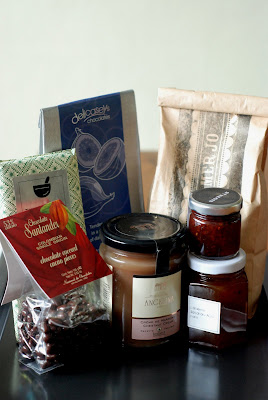 This sudden burst of activity was also a good opportunity to de-stock some of my pantry. I'm such a food trafficker- everywhere I go, I look for unusual or artisan produce and in the last year, I've been particularly attracted to "things that would be interesting in a macaron filling". I think it drives my Karen my Macaron Mentor, crazy because from time to time, I message her late at night with "pineapple tart jam in macarons" and she messages back "yuck!".

That hasn't stopped me from amassing a veritable collection of intriging locavore products, from left to right, single-origin chocolate covered cocoa beans that my cousin bought me from Columbia, chocolate covered figs and chilli lime chocolate from Australia, marron (chestnut) paste from Cafe Angelina in Paris, passionfruit mango puree from Sadaharu Aoki and hand-milled raspberry jam. The item that I was most excited about was a recent purchase from a fresh growers market, a brown bag of cinnamon muesli with dried figs, coconut and pumpkin seeds. 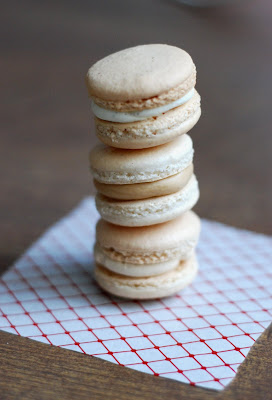 I made just the pale almond hazlenut shells and concentrated on concocting three flavours. One was an old favourite, the pale tan, salted caramel filling and the two were new flavours, darjeeling tea and vanilla yoghurt with fig, coconut and cinammon muesli, which are the darker taupe and bright white fillings respectively. 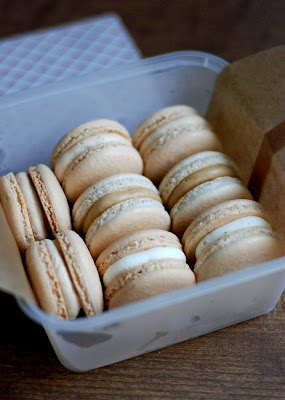 During my recent trip to Australia, I discovered Adriano Zumbo's macarons, one particularly spectacular yoghurt, apricot and pistachio macaron (and one that I found seriously underwhelming was his verdant green and too-wet rosemary and apricot). I wanted to do something similar using the muesli, so I decanted a large scoop of thick greek yoghurt and tipped the scrapings from a vanilla pod into swiss meringue buttercream to produce the distinctive sourish creaminess of yoghurt, flecked with resplendent black little vanilla seeds. It was surprisingly easy and stable to work with, the only flaw was that the initially strong sourness faded rapidly overnight. 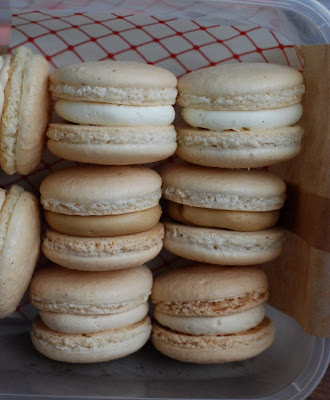 I packed two of each new flavour and four salted caramel macarons into parchment wrapped boxes and delivered them over the next day. From the feedback received, I wasn't the only one who loved the way the muesli filling slowly released the flavours of coconut and cinnamon into the yoghurt buttercream, it was the unanimous new favourite from even picky customers like my mom!
Posted by Weylin at 11:48 AM

So, I love macarons but have shied away from making them because they seem so... temperamental. Can you give me a lesson or two?