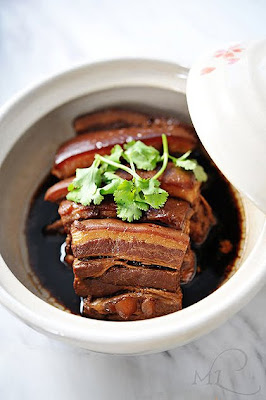 We are featured on the wildly popular and delicious blog, Chubby Hubby! A. was kind enough to feature our submission for his braised and stewed contest. This dish is a sure-win, with a deep fragrance and smooth, savoury taste. Click hereto see the full contest article.

Our prize-winning recipe was taught to me by one of my Shanghainese colleagues. He and his wife grew up in the 1970s and 1980s in China, when meat was a scarce commodity and a big treat. This was the dish that his wife cooked for him, when they were still friends, that impressed him into thinking she was a really fantastic catch. Maybe it'll work some magic for you too.

1. Plunge the pork into a wok of cold water, then slowly bring the water and meat to a boil and boil the meat for 1-2 minutes. Remove the pork and let it cool, then slice into 1/2 inch thick pieces.
2. Heat the cooking oil in a cleaned wok, add the garlic, ginger, spring onion, star anise, Szechuan peppercorn and cinnamon stick, then stir for a few seconds until the garlic becomes golden.
3. Put the pork slices into the wok and fry for half a minute
4. Pour water into the wok to cover the meat well, add the light soy sauce, oyster sauce, cooking wine and 2/3 of the rock sugar, then turn up the heat until the water boils.
5. Cover the wok, turn down the flame and simmer slowly for at least 1.5 hours
6. Before serving, turn up the heat again to reduce the sauce and season with the dark soy sauce and remaining rock sugar to taste.
Posted by Weylin at 2:33 PM