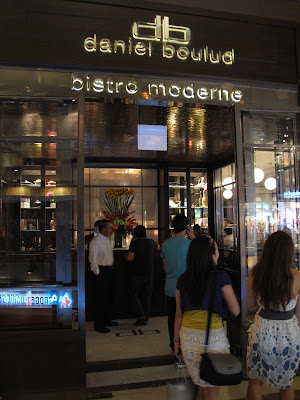 Many apologies for the radio silence; work has become more than a little hectic, and dashing from deadline to deadline means that there never seems to be any time for blogging the places I've been to, the most recent of which is db Bistro Moderne, one of the celebrity chef restaurants at Marina Bay Sands. 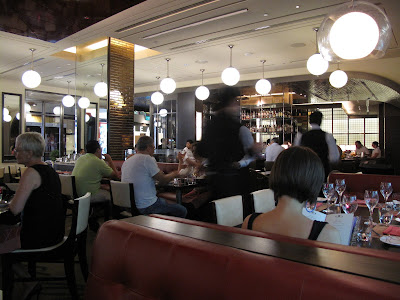 I've been to db Bistro Moderne in New York, which was a pretty classy affair, notwithstanding the famous, rather messy db Burger, so I was surprised to find that the version in Singapore is a lot more traditional, with conservative red leather-upholstered booths, and lots of dark woods. 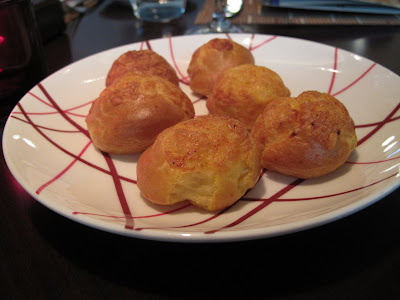 The food, too, was more classic and rustic than I had recalled it being in New York, starting with a plate of grougeres. This is over and above the usual bread basket, so if you're hungry (and you should be, as I explain below) it takes some effort to restrain yourself from pigging out on all the initial carbohydrates. It was somewhat disappointing, however, to discover that the grougeres were quite cold: while I can understand that it is much easier to bake them well in advance of service, it does detract from the enjoyment of eating what would otherwise be warm, light, airy, cheesy choux buns. 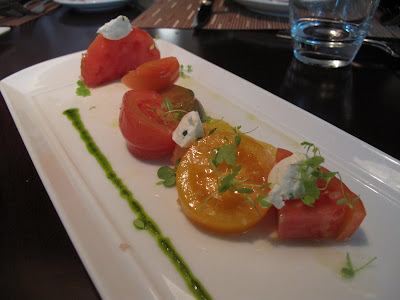 One of the special appetisers for the night was a lovely plate of sweet, juicy heirloom tomatoes served with goat's cheese. The combination of the crumbly, slightly tart cheese with the excellent flavour of the tomatoes was irresistible, though I thought the portion was slightly petite. 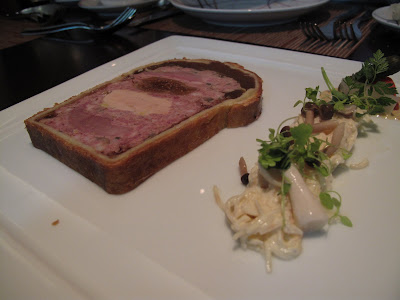 The Assiette Lyonnaise is advertised as a selection of terrines and cured meats, but I wasn't expecting what eventually arrived. Various terrines and cured meats had indeed been baked into a loaf, from which a slice is cut, giving you a cross-sectional view of some quince jelly, foie gras terrine, and other charcuterie, surrounded by a crust of pain de campagne. Very rustic, and very tasty. 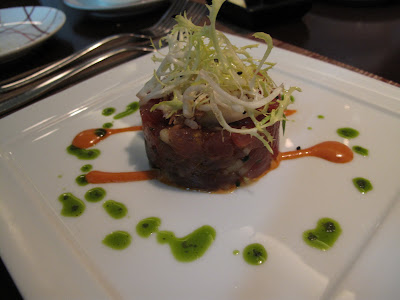 I didn't try the spicey tuna tartare, but it was certainly an artfully presented affair, featuring a mix of harissa, cucumber, radish and sesame seeds. 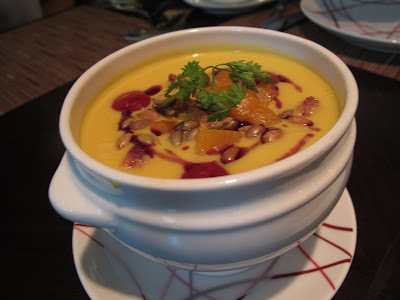 The butternut squash soup was a little too thick for my liking, but otherwise was a resplendent orange, and full of the sweetness of the butternut pumpkin, with a few pumpkin seeds for added texture. 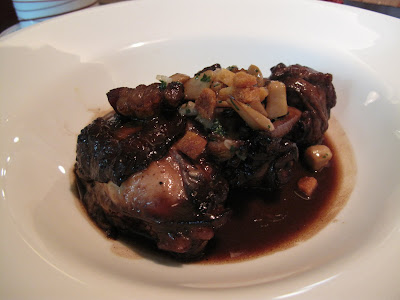 Moving on to mains, this was when we began to realise that, true to his word, Daniel Boulud had indeed kept prices roughly similar to his New York restaurant, without compromising on the size of the portions, which were, by Asian standards, enormous. The coq au vin featured a thigh and two drumsticks, served with a heaped portion of wild mushrooms, pearl onions, and spaetzle on the side. The sauce was as dark as molasses and looked as rich, but as I was struggling with my own main course I was not able to sample the coq au vin. 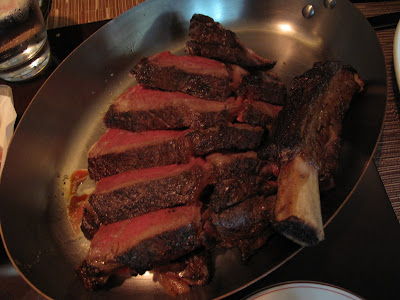 Rather ambitiously, my sister and I decided to share a massive cote de boeuf as our main course. It arrived with much fanfare, perfectly cooked and displayed with pride in a copper frying pan, and served with all the traditional trappings like bordelaise sauce and gratin dauphinoise. Robustly meaty and yet comfortingly succulent, the cote de boeuf was marvellous, though really it should be shared between at least three people. 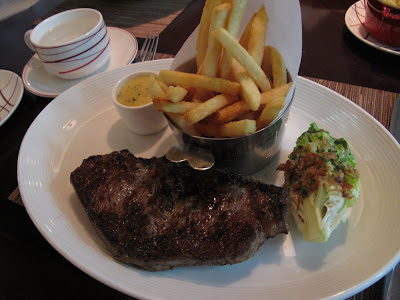 The restaurant's version of steak frites is likewise a 8oz sirloin steak served with bearnaise sauce and french fries. While not as tender as the cote de boeuf, which was to be expected, the sirloin was tasty, and the fries were very nicely done: crisp on the outside but fluffy on the inside. 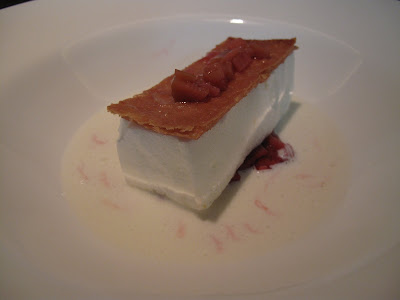 Almost everyone was too stuffed for dessert, and I would have passed too, were it not for the fact that a floating island is such a rare sight on a Singaporean menu that I just had to order it. Although suffering somewhat in terms of presentation (whoever heard of a rectangular island), the meringue was poached to an cloudy perfection, and the rhubarb-infused creme anglaise was a nice change from the plain, vanilla custard sauce.

All in all I enjoyed what db Bistro Moderne had to offer: a return to traditional dishes, with some updated touches thrown in, cooked with a deft hand, and at value for money prices. Although Marina Bay Sands is not exactly a convenient venue (Saturday night crowds are insane), restaurants like db Bistro Moderne, at least, give you something to come back to (although I suppose so does the casino).