I've said it before and I'll say it again, the saviour of the US and their horrifically poor infrastructure and transit systems is their astounding ability to innovate. Nowhere is this more evident then in the humble neighbourhood grocery store, on the baking and laundry aisle. It's for this reason, then whenever I find myself in the fertile womb of the motherland of consumption, I take stock of all the product that I find myself drawn to.

In no particular order, here are the top 10 things that I loved from my latest trip. If you have space in your grocery basket, or just feel like indulging a need (or want), give the following great products a whirl.

I am a big believer that the quality of baking chocolate cannot be compromised. It's for this reason that I use mainly Valronha chocolate, particularly in Asia where I suspect independant retailers mix chocolate. I've rarely found a better baking chocolate to use but then my friend introduced me to this one, which has a robust flavour and smooth texture. It is a stronger, more open, more American taste than Valronha, which I actually like, particularly for breads and cakes. This really is a lovely, quality chocolate.

This brand was founded in Berkeley and was the first American company in 50 years to produce artisinal but manufactured chocolate from bean to bar, using small-batch processing and a high cocao content. It was the brainchild of Robert Steinberg, a physician who was diagnosed with cancer and given 50% chance of surviving 10 years. He immediately threw up his day job and started to search for what he wanted to do, stumbling upon chocolate making and interning at Bernachon chocolate in Lyon, France. He started the company with his ex-patient, John Scharffenberger, who had some capital from exiting his sparkling wine business and they made chocolate out of their homes.

The company was eventually bought by Hersheys (20 years later) who combined it with their other purchases of Joseph Schmidt and Dagoba, then moved the operations entirely to Illinois. The quality and taste, thankfully, has remained intact and the Hershey's distribution has enabled them to be carried in all major US supermarkets. Sadly, the Hershey's outlet here doesn't carry the product so I'll just have to rely on the internet and friends for now.

I bought this clever device to pit grapes, olives and cherries and I guess it was kind of an indulgence becuase you can always just spit the seeds out. It makes it that much easier to juice cherries though and the splatter shield works like a charm, I was wearing a white shirt and there wasn't a single stain from a whole bag of cherries. Also, the hit rate is not perfect, there were three seeds in the bag of cherries that weren't removed but it's on the whole very effective and the loud pop that the device makes everytime it bangs out a pit, is oddly satisfying. 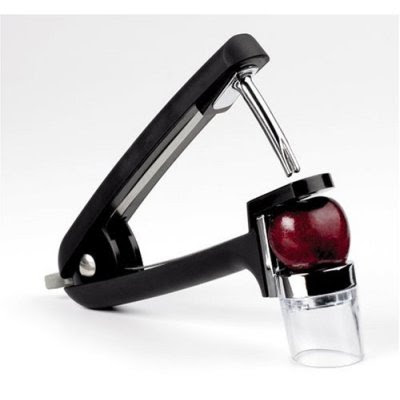 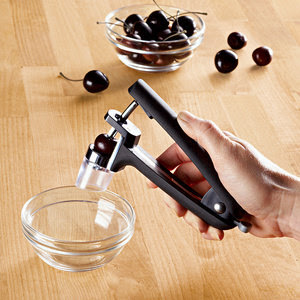 At the counter, as I was paying for my cherry pitter, the counter staff recommended their favourite pitting device, the mango pitter. According to them, it works like a dream and takes all of a few seconds to core a mango. I was also attracted to this because we eat a lot of mangos at home and they are time-consuming to dissect. One advantage of this, from what I can see, is that it cleanly removes the seed, without the need to hold the slippery core and slice around it so that you don't waste the parts near the seed. The only thing that stopped me from buying one (well, other than my dear dad who takes pride in his mango-slicing skills) is that while I am keen on pitters for small fruits and turgid fruits, I was just a bit sceptical of how pretty the mango would emerge from this harsh treatment. True to form though, in America, there is a separate pitter or slicer for almost every kind of fruit, there is also a similar one for apples and apricots. If durians were popular in America, they probably would have invented a durian pitter too by now. 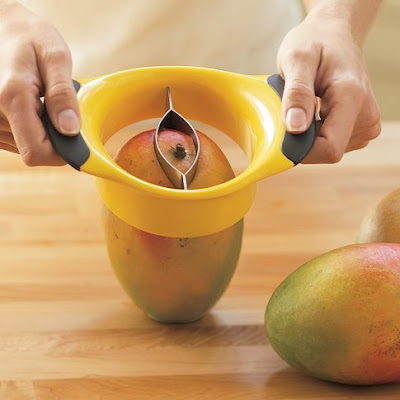 I find that in Singapore, perfectly ripe avocadoes are quite a rarity, unless you buy the really expensive Japanese supermarket species. They are usually slightly too ripe, or else they are the Australian avocadoes that tend to be somewhat tough. Slicing them is thus usually a messy business and makes your salad look ugly. If you, like me, get really frustrated at using a spoon in an avocado, try this nifty little device. 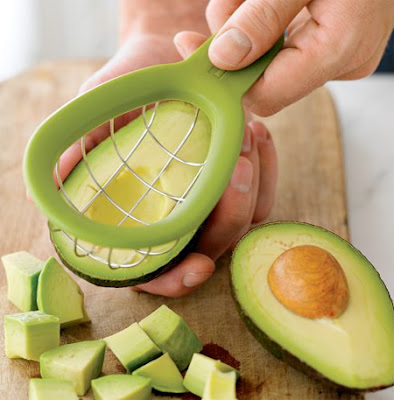 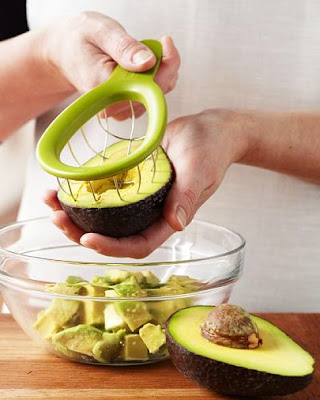 I find my digital kitchen scale one of the most important pieces of equipment and I can't quite remember the days when I used to use a manual green plastic weighing scale (and I'm glad they are over). Digital weighing scales give you more precision and accuracy in measuring and baking results and they help save you time too, by allowing you to tare (reset to 0) with your exisitng containers, bowls and added ingredients. I wish all recipes would be fully converted into a system of weighed ingredients, rather than measured in metric or cups.

I live in fear that the batteries in my digital kitchen scale will fail at some point, or like most devices in the tropics, that moisture will get into the screen or the battery compartment. When I saw this new kitchen scale, I found myself wishing that my existing scales had a shorter shelf life and would die quickly, so that I could be justified in then replacing it with this set.

The EatSmart Precision Pro Digital Kitchen Scale is a reasonable $25USD, compared to the $70SGD that I spent on my simple Tanita scale. It is matt and stainless steel, the buttons are tab buttons (as opposed to rubber buttons that you depressed, on the previous scale) and the number display is clear and large. Best of all, it takes regular, not watch-sized batteries. 2838 unanimous 5-star reviews on Amazon do not lie. 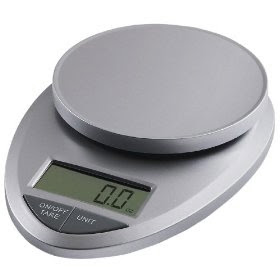 6. Seal and Grip by Gladwrap

This Gladwrap product is actually now available in Singapore and a few of the more upscale Cold Storage groceries have the full range of Gladwrap items, including ice cube bags, colourful sandwich lunch bags and insulating bags. This functions like clingwrap, except that each side is coated to be slightly adhesive to each other, forming a tightly sealed packet around your food or vegetables. I find that this helps to keep fresh herbs healthy for longer (very important in not wasting food) and is particularly good with meats and doughs. It is much neater and dryer than using clingwrap, so I have just one roll of this in my drawer for the occasional use. 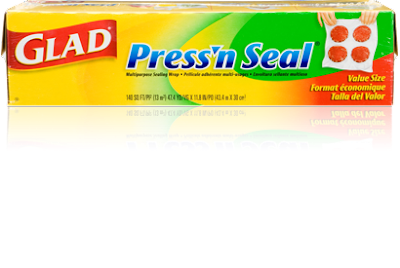 It was late at night, after an afternoon of stewing beef rendang and my friends had turned in but I was stricken with jet lag so I decided to indulge in a bout of compulsive cleaning. I contemplated her stove but could only find an all-purpose cleaner, so, not holding out too much hope, I absently sprayed it on the stove and was completely surprised, no, shocked even, when a simple, quick wipe yielded a shiny surface and a towellete full of cleanly-swept grease and dried remains. I have a small obsession with kitchen cleaning tools, particularly surface-cleaning tools like stainless steel wipes, glass cleaners, stone cleaners (that don't corrode natural stone, ceramic or laminate) and I must say, this is the best, or at least one of the best all-purpose cleaners I have tried in a long time.

I found out from my host (bless friends who do their research) that Method was founded in Berkeley and is a green cleaning brand that makes natural, biodegradable product for laundry and home care, similar to Mrs Meyers and Seventh Generation. The best thing about their product suite is that it is inexpensive ($2.70 a bottle at Target) and wide (includes a Pro-Chef granite cleaner, nursery sterilizer and leather wipes). Their founder, Adam Lowry, is a champion of the treehugger movement, that is, codifying and making legally binding, social and environmental business practices of climate conciousness, responsible sourcing and sustainable development. If you have a moment, google their business and read about their ethos and practices, it's very inspiring. And we all know that making all-purpose cleaners inspiring is a mind-bending paradigm. 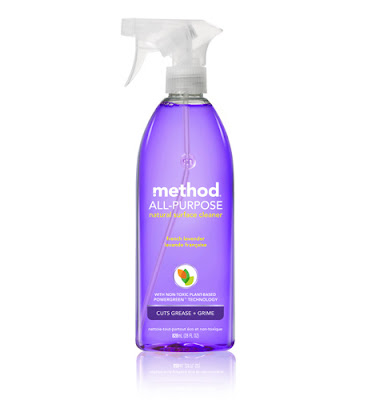 This was my favourite thing from my friends' kitchens. I have a hidden tupperware manic deep inside me and if these OXO food storage containers were available here, I'd buy enough to stock my pantry. I love that these are air-tight and help to create a vacumn-sealed environment. They also come in all sizes, you can buy a set and then top it off with a extra containers. I use Lock and Lock containers myself but they aren't as sleek, they aren't air-tight and they don't stack the way these do. 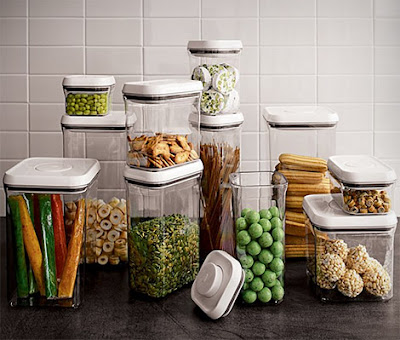 Ok, I'll admit it, this is a little white elephant but how cool would it be to make your own sodas! This is the kind of thing that is probably better to try at your friend's home, rather than bring one back to your own but what do I know, I don't even drink carbonated drinks. If you do, I think it is much healthier to make them yourself out of fresh juices or cordials, rather than turning to that Coke or isotonic drink. You can even use it to experiment with molecular food. There are many kind of soda mixers but I'm told that this one, made and patented by the company SodaStream is the best one. Available at Williams-Sonoma, major department stores and various other homeware stores for about $100USD, plus $10 for CO2 capsules. 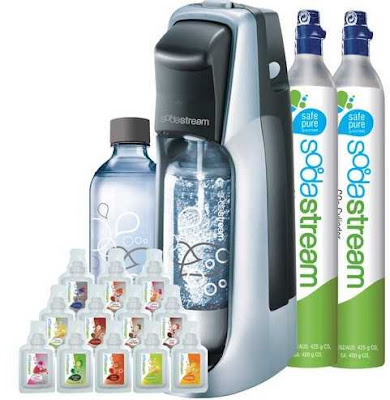 As the world gets caught up in healthy living, single origin food products and being born to run, masticating slow juicers (this refers to juicer with a turning or screwdriver motion, rather than a crushing and press motion like regular juicers, this is thought to retain more natural fruit fibers and prevent oxidation) have become the talk of the town. Almost every single major homeware and natural store I went to was peddling some form of this juicer as a health "essential" and I've seen it on countless videos, blogs and Facebook updates. This is the most well-known one and by all accounts, the most efficient in removing pulp and juice from fruits and vegetables. We now have one at home, thanks to an over-enthusiastic (some would say slightly fanatical) convert to the juice diet, so I'm qualified to give a well-researched review.

Compared to most other juicers, this juicer is certainly quick, fairly convenient, space functional and effective in getting the most out of your fruit. I've been impressed by the volume of juice, the colour retention of the juice, its ability to juice nuts (almond milk and soyabean milk) and even frozen fruit. It has a lot of applications even in cooking, you can use the pressed vegetables for essence or soups and frozen fruit for smoothies and popsicles. However, like all juicers, it does have up to 5 parts, 7 if you count the two container jugs and it is a pain to wash up after but again, not more than your typical juicer. It is also pricey, retails at $359USD, although admittedly, not much more so than most masticating juicers. I don't know if I truly believe the hype of juicing (without the collorary disciplines of moderate diet and exercise) but if I could find some way to go long the manufacturer of the Hurom Juicer and short the Breville Group, I would. 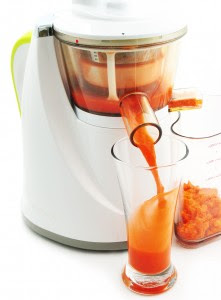 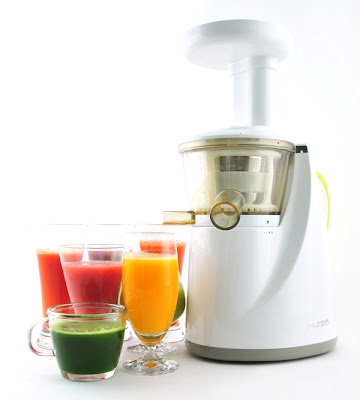