I have been surprisingly busy as I prepare to start a new job, and as such I've been prevented from blogging about one of the more enjoyable meals I had in 2011. 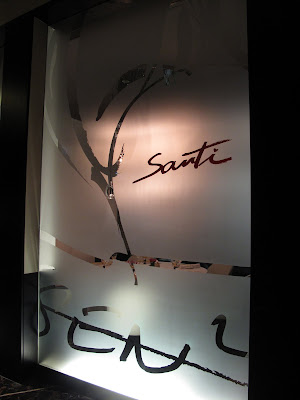 Much has been written about all the celebrity chefs who have set up shop in Marina Bay Sands, and of course the untimely death of Santi Santamaria made instant headlines, but it was not till fairly late in the year that I finally had a chance to have a meal in Santi. Tapas are served at the bar (go figure), and if the high bar chairs are not to your liking, there is a row of low seats next to the glass walls which are only slightly less uncomfortable. The front of house is rather dimly lit, too, so most of the photos are not fantastic; until I had the bright idea of holding the plates up to what little light there was. 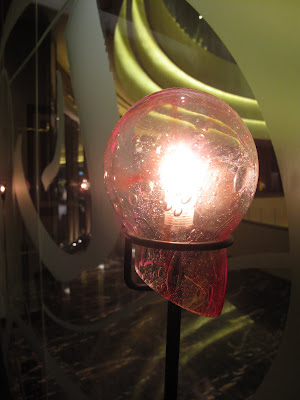 There are some cuisines for which it is extremely difficult to find a good restaurant, and Spanish food (tapas in particular) tends to be one of them, as evidenced by my rather ambivalent reviews of the various Spanish tapas bars I've tried. Given Santi's reputation, however, I was fairly optimistic of finally having credible tapas. 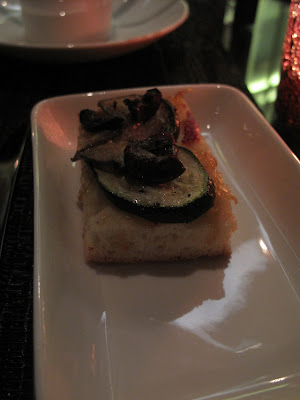 A small morsel of roasted zucchini and mushrooms on lightly baked bread was just what was needed to whet the appetite. 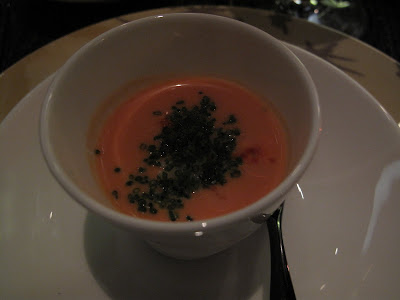 Like any tapas bar worth its salt, Santi offers food in both tapa and racione portions, with prices of the latter roughly twice the former (although in some cases they were considerably more). I love gazpacho, and at $4 for a tapa and $8 for a racion, Santi's Gazpacho Andaluz was very affordable, and quite delectable: fresh and spritely without being sour, sweet and rich without being cloying, and with a slight savoriness hinting that the tomatoes had been roasted to concentrate their flavours. 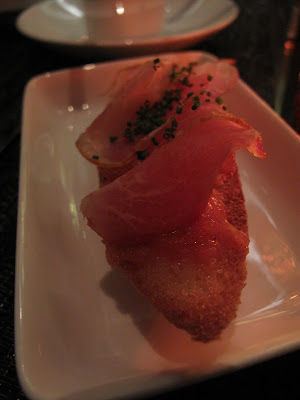 Santi offers two kinds of ham - Iberic Lomo and Iberic Ham "Joselito" - but I didn't really want to pay $60 for the "Joselito", and $10 for the lomo by comparison didn't seem so bad. While there was certainly nothing wrong with the thinly-sliced ham and the toasty croute that it lay atop, I did think that it was probably one of the more overpriced tapas on the menu. 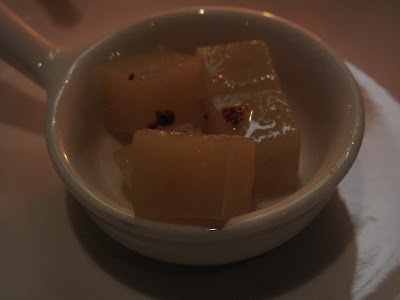 Manchego cheese, I feel, is superbly underrated, and Santi serves up wicked cubes of manchego drizzled with an unctuous oil to accentuate the delicate, slightly astringent pungency of the sheep's milk. Eating this reminded me of my college days, when I would buy wedges of manchego from the market to eat with seedless green grapes as my weekly indulgence; it's quite disturbing to think I haven't had this delicious cheese since then. 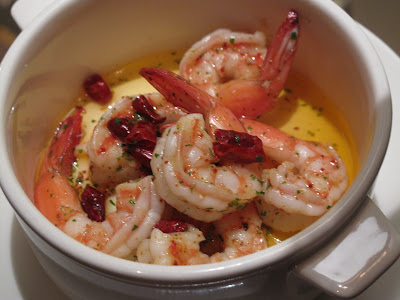 Soon, it was on to the hot tapas, and I had originally ordered a tapa portion of prawns "al ajillo", only to discover to my dismay that for $8, all you get is two prawns. The racione portion isn't much better; you get six or seven prawns for $30. The prawns are given a marvellous heat from the garlic and the chillis, though the garlic could be somewhat overpowering for some, and the amount of oil used was, I thought, more generous than the number of prawns in it. 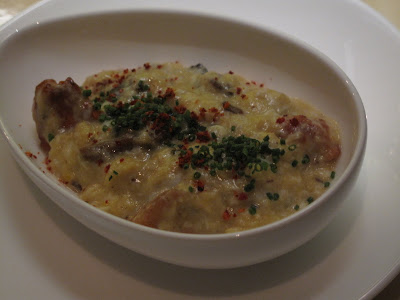 The mushroom "revuelto" had a lovely creamy texture, with the eggs clearly having been slowly cooked to ensure that they were not over-scrambled, but all said and done, this was essentially scrambled eggs with mushrooms which, at $8, was probably not the best bargain in the house. 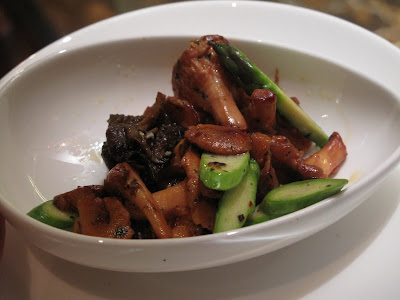 A dish of forest mushrooms and asparagus, however, was a much more sensible order (and, incidentally, no longer seems to be on the menu), as it's not something you're likely to prepare at home. Earthy, juicy mushrooms and the distinctive, slightly ferric asparagus, lightly seasoned with salt flakes, are impossible to resist. 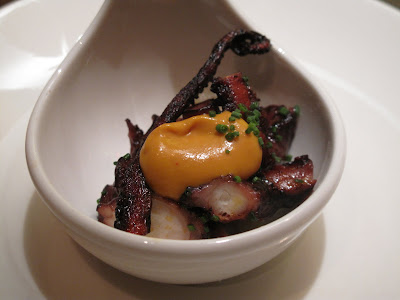 My favourite tapa, however, was definitely the octopus "a la plancha". Supple and yielding, the grilled octopus had a wonderful char that imbued it with an extraordinary smokey flavour, and a large dollop of salmorejo, or tomato cream, gave it an extra fillip of sweetness. At $6, this was the dish that offered the best returns. 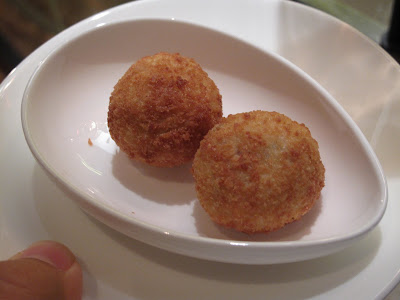 Although part of the fun of ordering tapas is not knowing for sure which you'll like the best, that can also be a significant downside, especially in Singapore, where tapas are not exactly cheap. Another problem is that tapas tend not to be that substantial, leaving you hungry even after you've had a few orders. Consequently, croquettas are almost always indispensable, and Santi's version features a rich bechamel filling, and after a few of these, you should be feeling pretty full, so I suggest only eating them towards the end of the meal. 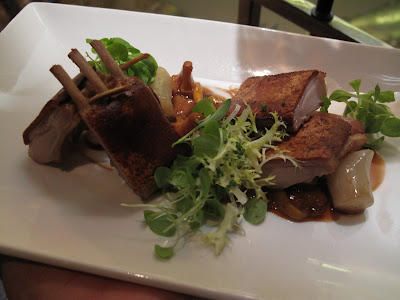 At some point I was getting a little bored of tapas, so I decided to order some of the main courses found at the bottom of the tapas menu. One of the more intriguing (which now no longer seems to appear on the menu) was some roasted pork ribs, which look really phenomenal in the photo, but they took something like half an hour to arrive, and when they did, they were rather tiny; hardly what I would call a main course, and barely enough to share (which was the whole point of the dish). Given that they weren't that cheap either, it's far more advisable to pass on the pork rack, and order the next main course instead. 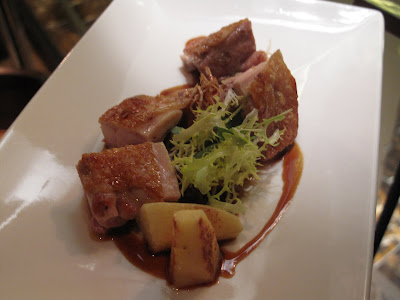 Our final dish was a tender, quite possibly sous vide, chicken breast (also apparently no longer on the menu), glazed with a fine, almost syrupy sauce. Although a main course, this didn't cost much more than the tapas, and is highly recommended should it ever make its way back onto the dinner menu.

Santi undoubtedly serves up the best tapas in Singapore, but you should certainly expect to pay for it. This can be mitigated if you stay away from the more expensive items, and stick to those that are really worth it (e.g. gazpacho, manchego, octopus, chicken), and stay away from the fixed price tapas menu, which offers you a fixed number of tapas and a drink. Skip the drink and use the money to order a la carte, and before long you'll be planning your next trip to Andalusia.