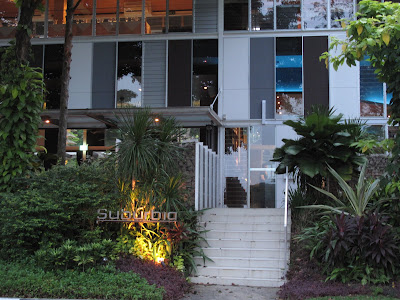 Instead of another meal at Braise or Chinois by Susur Lee (although I suppose I could have given Il Lido another try), I thought I would try something new after coming across a restaurant in Sentosa's directory named "Suburbia", and I was rather tickled by the restaurant's setting in the beautiful surroundings on the fringe of Sentosa golf course. 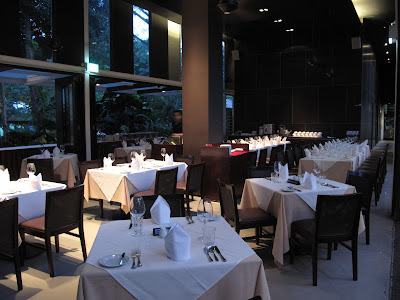 Nestled against rolling hillocks, the scenery is so pleasant that the majority of the restaurant is in fact dedicated to al fresco dining, which can be a little daunting at night when squawking cockatoos fly overhead. As with all outdoors dining, however, I can well imagine that the pleasantness of the experience will largely be dictated by the vagaries of the (recently very mercurial) weather.

The menu is extensive, ranging from classics like Waldorf salad, to hearty fare such as grilled beef tenderloin 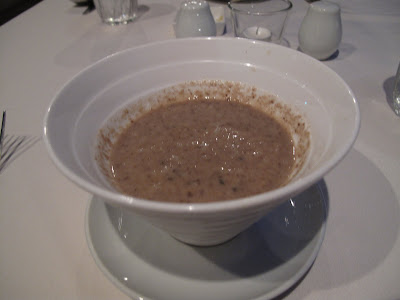 My appetiser of cream of wild forest mushrooms was thick, with coarse bits of mushroom adding both texture and flavour. Having said that, though, I did think the soup could have been thinned out with some vegetable stock, so as to produce a smoother, more liquified offering. 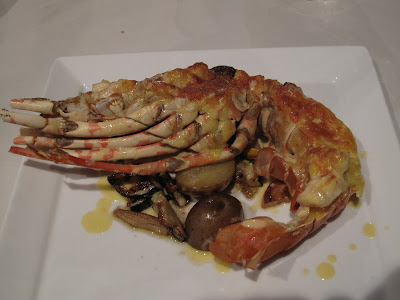 S had the Lobster Thermidor, which had been sauteed and then, it would appear, baked with hollandaise sauce and grated parmesan cheese, and served with new potatoes. S had no complaints about how the dish tasted, but I felt that in terms of presentation, more effort could have gone into sprucing it up: the lobster was meant to be the star, it was true, but it looked naked and, ironically, lifeless as it lay forlornly on the stark white plate. 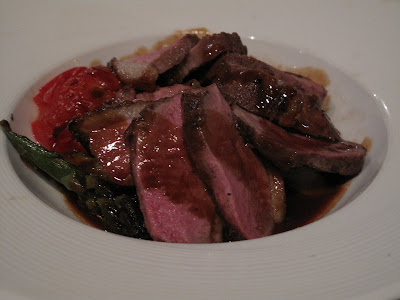 I ordered the honey-spiced French duck breast, as I was intrigued by the "caramelised Sarawak pineapple", with pink peppercorn and grand marnier sauce. I suspect this was a local interpretation of duck a l'orange, but there were a few little hiccups with this dish. First, although the helping of duck was very generous indeed, I thought the duck breast was a bit tough, which was an indication that the duck was a little old. Second, apart from a thick round of pineapple sitting at the base of the dish, there wasn't much pineapple flavour to speak of. Third, I wasn't sure that pineapple was a suitable substitute for orange, as unless the pineapple is unripe, it tends to be much sweeter than it is sour, and the characteristic tanginess of duck a l'orange is lost. Still, it was a valiant effort.

All in all, Suburbia is a pretty decent place to have a meal in Sentosa if you're not looking for something that's too fancy, and while it may not measure up to the more impressive offerings in Resorts World Sentosa, there's no reason it can't be considered for a nice family meal.