With the introduction of the Integrated Resorts in Singapore, diners are eagerly anticipating the arrival of superstar restaurants such as Daniel Boulud and Guy Savoy at Marina Bay Sands, but there are also some pretty good restaurants at Resorts World Sentosa, such as Chinois by Susur Lee. 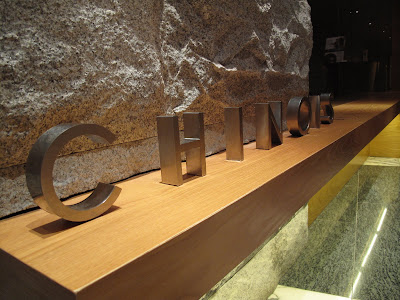 Chinois is, I believe, the latest addition to the Tung Lok Group's impressive portfolio (stable might be more appropriate) of restaurants, and is also celebrity chef Susur Lee's first restaurant outside North America. This collaboration aims to elevate Chinese fine dining by introducing elements of modern Western cuisine. It is, in a sense, "fusion", but that is a term that is no longer in vogue, and it would do the restaurant a disservice to so label it. 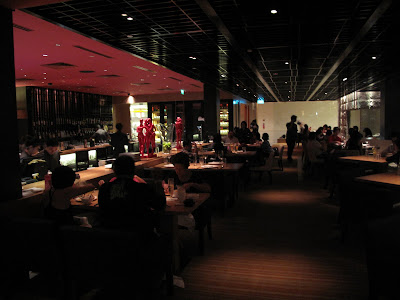 Resorts World Sentosa is not the most impressive of venues: the facade of the resort and the various hotels is very tacky, and you have to make your way past hordes of tourists, children and gamblers. Sometimes they're even all the same people. Parking was also a problem: although the electronic signs indicated that there were thousands of parking lots available, I had considerable difficulty in locating a free lot, and that was after being directed to turn the wrong way by various parking attendants. Once you get to the restaurant itself, however, it's a different story: the lights are dimmed, and there is generous use of burgundy and black, which evokes a contemporary, almost seductive ambience. Straight lines and pronounced edges contribute to the mystique. 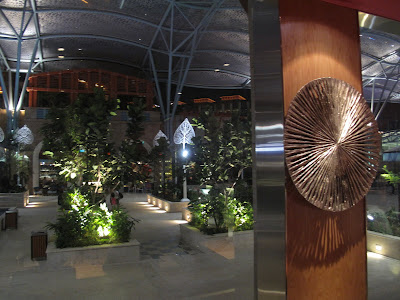 The restaurant boasts large bay windows which look out into a covered courtyard, which is a nice touch as it allows you to feel close to some natural greenery. Periodically, a laser show might be performed, lighting up the artificial roofing with incandescence.

Chinois has a very extensive menu, and it therefore took us a while before we were able to decide what we wanted, which turned out to be a number of appetisers and main courses, leaving us far too full for dessert. 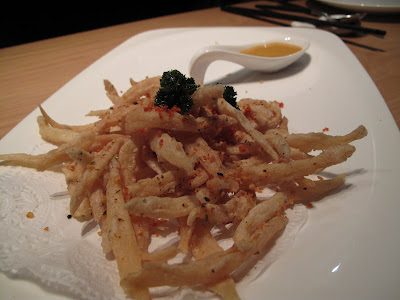 The whitebait was extremely crispy, and accompanied by a spicy, tangy sauce, it was a delightful start to a big meal. 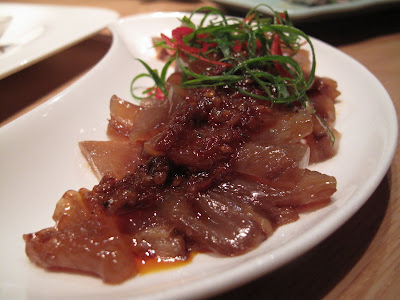 I fancied the ox tendon rather less: it had been cooked for quite long and tasted like jellyfish - bodiless and slippery. I like cartilage, but only when it is firm and crunchy, though I suppose tendon is not exactly cartilage and cannot therefore be prepared any other way. 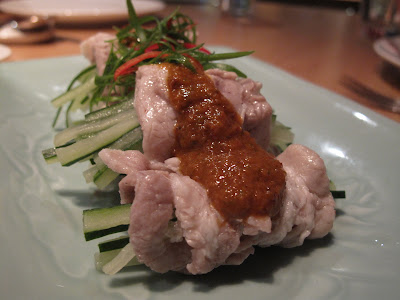 The next appetiser was a cold dish that consisted of finely shredded cucumber strips wrapped by a thin piece of pork and slathered with a spicy peanut sauce. I did not enjoy this, as the sauce was overwhelming - it filled your mouth and overpowered everything else. A more delicate, soy or miso-based sauce would have been much more complementary. 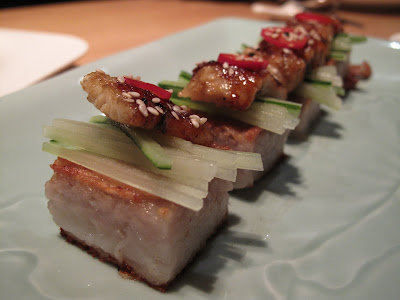 The grilled eel served atop little squares of toasted yam cakes was delectable: the eel was sweet and umami, while the sesame seeds lent a delicate smokiness, which was then overlain by the refreshing coolness of the cucumber strips. Rounding it all off was the sensation of biting down into the supple, chewy, starchy yam. For an appetiser, this dish was beautifully complex and very well-executed. 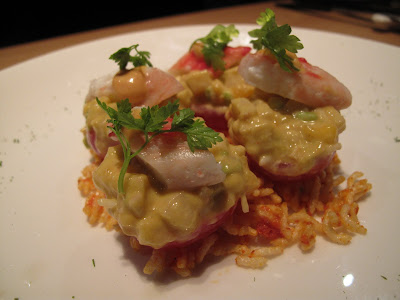 Chilled momotaro tomatoes followed, with an unusual sauce that was laced with wasabi and diced fruits, such as mangoes and peppers, topped with a slice of Alaskan King Crab meat, and served on a bed of crispy rice. 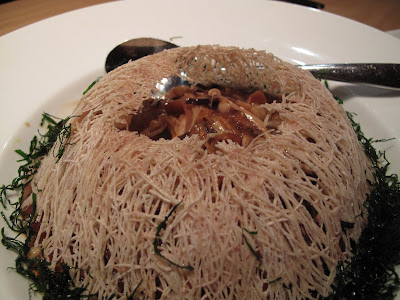 One of the restaurant's signature dishes is braised vermicelli with mushrooms, served in an edible "nest" or "cage" or "basket" of fried yam. Not only is it visually stunning, but it makes for delicious eating too: the mushrooms are bursting with flavour, while the vermicelli soaks up the sauce and effectively multiplies the taste quotient along its entire length, and the yam basket adds an extra layer of complexity by providing a sharp, crunchy contrast to the gooey mushrooms and noodles. 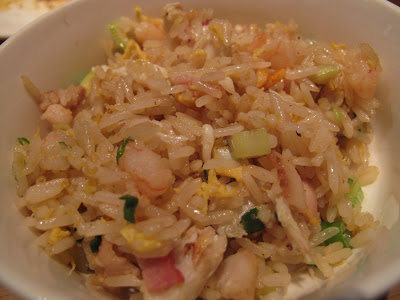 There's not much that can be said about fried rice, but Chinois's version is excellent: it is not at all oily, and it contains such a surfeit of ingredients that it seems like the rice is actually outweighed by the amount of prawns, crabmeat, eggs, Chinese sausage, chives and onions it is cooked with. 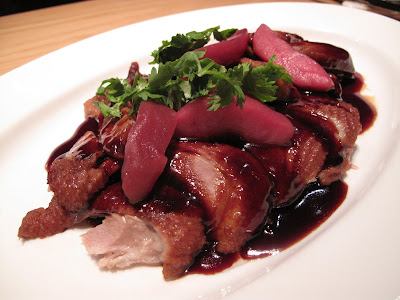 Rather foolishly, at some point during the dinner, we thought we didn't have enough food, so we ordered some smoked duck with five-spiced sauce, which was a bit of a mistake on two counts: first, by the time the duck arrived, we were already rather full; and second, although the duck was enjoyably tender and meaty, the sauce was unbearably sweet - almost sickeningly so - and had to be mixed into a sizeable bowl of rice to dilute its effect. 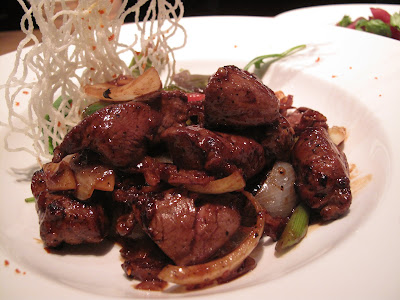 The sauteed beef cubes were the clear favourite that evening, as they were perfectly cooked. Not only were they soft and supple, they were also cooked pink - juicy and bursting with a rich, almost smokey flavour, which of course went very well with the accompanying onions and green peppers. I must have eaten half the plate by myself, even though I was by this point exceedingly stuffed. 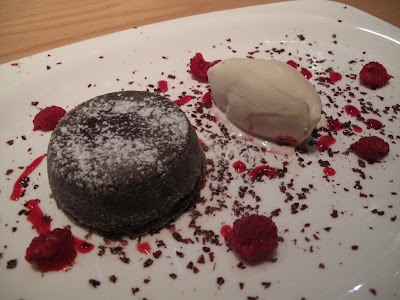 There was just enough space left in our bellies for one dessert to be shared, and so we chose a molten chocolate cake, which arrived in an exceptionally short span of time. Usually it takes about 15 minutes just to bake one of these things, but ours must have appeared on our table within 5 minutes of us ordering it. The cake boasted an exceptionally thin skin which, when broken with a spoon, released a torrent of melted chocolate onto the plate. A very credible offering and a delightful way to end the meal.

I've grown to become rather wary of restaurants helmed by celebrity chefs, especially when they are opened far away from the chef's hometown. I always feel that causes a loss of homeground advantage, in the sense that new suppliers have to be found, and new business relationships cultivated. New staff have to be hired and trained, and completely different expectations are brought to bear. Chinois by Susur Lee, however, does not compromise quality for reputation, nor substance for hype, making me cautiously optimistic about what the other celebrity restaurants will have to offer.