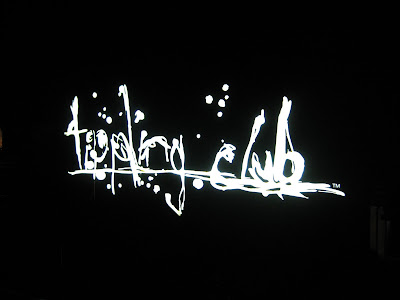 It's been a while since the Tippling Club first came onto the scene at Dempsey. When I first heard about it, I had my doubts about the concept: a bar restaurant where the food took second place, as a convenient means by which the cocktails prepared by a world-renowned mixologist could be showcased? I also heard secondhand accounts of how the food was disappointing and overpriced. 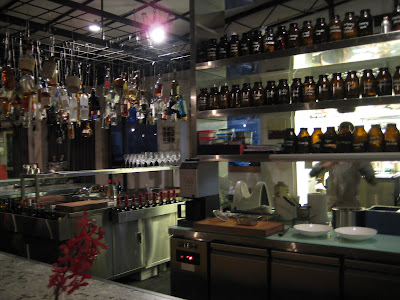 I suppose it's fair to say that the Tippling Club is a bar first and a resturant second: that would explain why there are almost no tables in the restaurant - rather, there is a massive counter which allows you to get up close and personal with the bartenders, and to admire the panoply of bottles, all containing some form of spirit, that hangs down from the rafters like an alcoholic's windchime. It's a clever effect, almost as if you've wondered into an Aladdin's cave with colourful stalactites of alcoholic beverages. 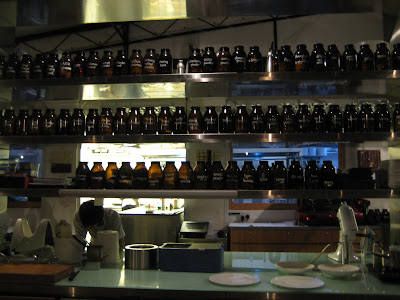 There is some devotion to the food, however, as the large island attests. The space here is mainly used to create desserts, although the numerous jars that adorn the shelf also contain rather exotic spices and seeds which are used for infusing cocktails and adding allure, which all fits the Tippling Club's image as a sophisticated, almost chichi spot where people come to be seen. 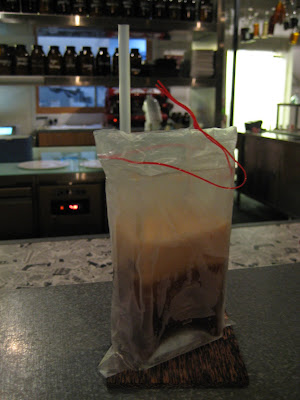 Not that the Tippling Club does not resort to frivolity on occasion: their famed "kopi-o", although served in a chilled, vase-like glass, is wrapped in the same plastic bag a genuine kopitiam drink would be served in, and you are expected to drink through a straw. Cute, and well-balanced, with the strong espresso evenly distributed through the clean, crisp rum, I was only sorry that my drink went down as quickly as it did. 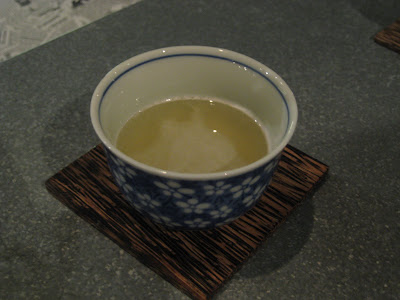 The delightfully named "no blossoms and no moon, and he is drinking sake all alone!" is a delicate mixture of sake (of course), noilly prat, orange blossom and lemon verbena grape mist. Served in a Chinese teacup, this dry, light drink is refreshing and genteel - drinking this makes you seem like a connoiseur, or a cultured philosophe enjoying a quiet libation at the end of a taxing day deep in thought. By this time, however, I was beginning to see why the Tippling Club had a reputation for being expensive. Drinks were, on average, $24, and did not come in very large portions, so even if you did not observe the pinch immediately when looking at the price tag, you certainly felt it when your drink was finished in three sips. 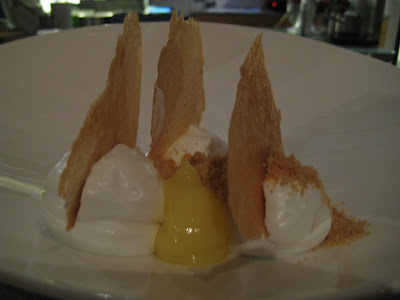 Perhaps unwisely, we decided to order some dessert to go with our drinks. "Lemon Tart", the menu proudly proclaimed, and then listed its ingredients: meringue, sable, lemon chips and lemon curd. I was rather surprised by what eventually appeared: a blob of lemon curd sandwiched by three blobs of meringue, into which three sable crisps had been stuck, over all of which crumbs had been sprinkled.

Now, I think this deeply disingenuous. Although I regard the "sum of all its parts" method of presenting a menu (i.e. listing the constituent elements of a dish) irritating, I can live with it as long as it actually describes, with a fair degree of accuracy, what I can expect to receive. Which brings me to another pet peeve: "deconstructed" foodstuffs. I greatly dislike molecular gastronomy's habit of serving you various bits and pieces and claiming that you have been given a masterpiece. A slice of apple, a glass of apple juice, flour, butter, sugar and cinnamon is not an apple pie, "deconstructed" or otherwise, and I wish people would stop pretending this is a clever way of serving food (apart from the fact that it is a clever way of getting people to pay outrageous sums of money for what is, essentially, a lack of skill).

The Tippling Club has, unfortunately, managed to combine both these sins of molecular cooking: it borders on misrepresentation to say on your menu that you are serving "lemon tart", only to give your customer a pathetic few squeezes of a piping bag. At least have the decency to tell me that you plan on serving me something "deconstructed" so I'll know not to order it. In addition, the size of the dish was really rather pitiable, and it was outrageous that the restaurant saw fit to charge $18 for it.

The other problem, and I'll readily acknowledge that this one was largely our fault for ordering it in the first place, was that the meringue and lemon curd totally killed our tastebuds, rendering them useless for appreciating the drinks that were to come. 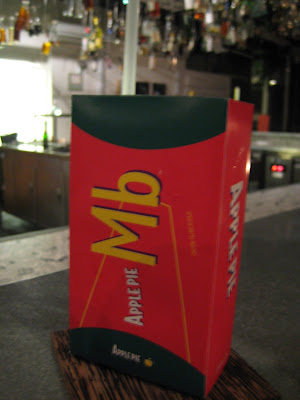 Mb's Apple Pie is another cute drink, though this time it was a bit more inventive than it was tasty. Calvados, Cinnamon, Italian vermouth and apple liqueurs made the drink taste too much like apple juice, although the riff on McDonald's famous apple pie packaging was an inspired touch. 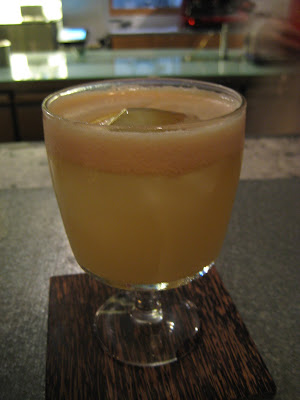 My final drink involved a Tonka Bean Elijah Craig 12 year Bourbon. Tonka beans, Wikipedia informs me, are native to the Orinoco, and are wrinkly black beans that smell faintly of vanilla, although it disturbs me slightly to learn that their use in food has been banned by the FDA. In any event, I didn't like this drink at all, though I think it had less to do with the Tonka beans than the fact that I now know I just do not like the taste of whiskey very much.

Overall, I was not very impressed with the Tippling Club. I don't think it succeeds magnificently as a restaurant, although to be fair I didn't try any food apart from the "deconstructed" lemon tart. As a bar, the Tippling Club is overpriced. Sure, they boast that they use only freshly-pressed juices, and hand-chipped ice, and "totally exclusive" drinks, but a lot of the drinks seemed merely flashy - a convenient prop with which to impress a date - rather than a truly sophisticated and multi-textured work of skill and devotion. Once the novelty wears off, you might be wishing you chose somewhere slightly more down to earth, or at least somewhere with larger, and perhaps stronger, drinks.

Thank god for an honest review. It's just a ridiculous place, but it's the kind of place that the so called local intelligentsia will hype and proclaim the plebes don't 'get it' when we complain.