Not long after our recent visit to Chinois, S and I found ourselves back in Resorts World Sentosa, looking for some dinner before attending what turned out to be a very enjoyable Air Supply concert. Most of the restaurants seem to be clustered in Hotel Michael, but I am assuming that, in the fullness of time, other restaurants will be opening in some of the other (currently culinarily-starved) hotels. 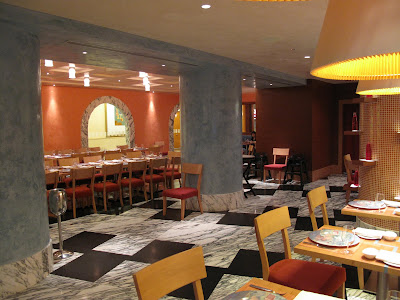 One of the four restaurants in Hotel Michael is Palio, a brightly-lit, cheery Italian eatery that reminds me of Prego, although I don't think Palio has a buffet, unlike Prego. 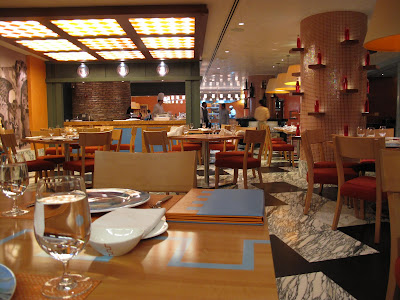 The restaurant does have, however, an open counter where you can see the chefs working on making pizza, which, as we shall see, was of rather high quality. 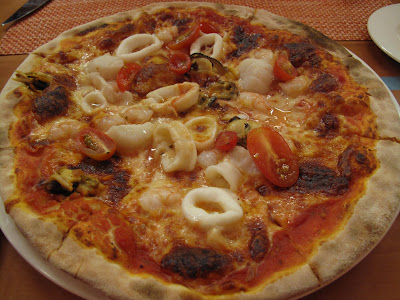 The seafood pizza was of an extremely generous size, and boasted a thin, crispy and crunchy crust. Scorch marks were to be found in all the right places, adding to the vivid appearance of the pizza, as well as enhancing its oven-roasted aroma and taste. The seafood was also very fresh, but I have come to the conclusion that I don't think seafood pizzas are a good idea: tomato paste, mozzarella cheese, squid, prawns and scallop are too varied and discordant in their textures, tastes and smells to work in harmony. I imagine, however, that pizzas using more robust ingredients, like salami, ham or mushrooms, will be outstanding. 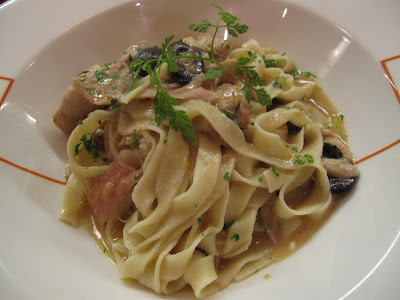 Palio does not offer a very wide selection of pastas, but one that caught my eye in particular was the tagliatelle served with rabbit ragout and black olives, which is a dish I remember fondly from L'Ancora. Palio's version, unfortunately, did not quite measure up, for a number of reasons. First, the amount of rabbit in the ragout was not as generous, and second, the ragout simply lacked the lip-smacking vibrance of the one at L'Ancora - perhaps it might have been the omission of tomato puree to the stew, or a lack of fresh herbs, but whatever it was, Palio's rabbit ragout was, I thought, somewhat too bland and limp to stand up to the saltiness of the olives. 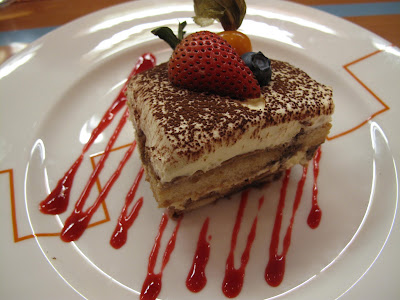 The tiramisu was a little dry, but this is very much a matter of personal preference - some people like their tiramisu drowning in coffee, while others like the sponge bone-dry. What cannot be denied though, is that the tiramisu is very arrestingly presented, which is how all desserts should be.

Palio is a welcome addition to the community of Italian restaurants in Sentosa, and is fairly reasonable in its prices. Be sure to make a reservation on weekends, as the restaurant fills up alarmingly quickly.