Curiously, despite the fact that the Tung Lok Group has been around for quite some time, I don't seem to have reviewed very many of their restaurants. Thankfully, that is beginning to change, beginning with the rather epic meal at Chinois. 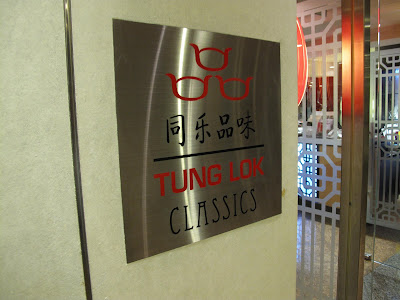 So it came to be that a table of ten gathered to celebrate a birthday dinner at Tung Lok Classics in Orchard Parade Hotel. First impressions were marred by the difficulty of negotiating the cramped carpark, as well as the challenge of actually locating the restaurant itself, but the rest of the dinner was truly memorable. 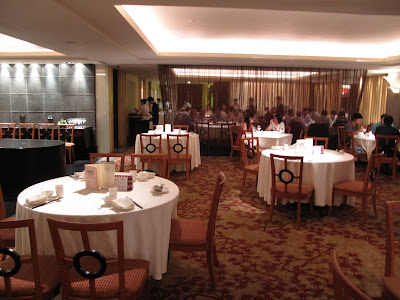 Although Tung Lok Classics looks like any ordinary Chinese restaurant, I was greatly impressed by the level of service, which was both friendly and professional (although to be fair we did book a private room), as well as the quality of the food, which was of a consistently high standard. 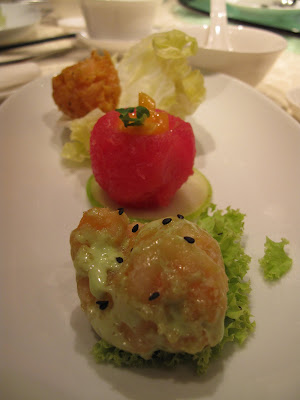 We started with a duo of prawns cooked in two ways: lightly fried and coated with wasabi mayonnaise, as well as deep-fried with salted egg yolk on Chinese lettuce. Wasabi prawns are done to death these days, but these not slathered with the stuff, and so they were slightly heady without being cloying, while the deep-fried prawns were richer and tastier thanks to the egg yolks. In the middle of the prawns was a scoop of watermelon, which had been excavated and filled with diced mango - a fruity and juicy intermezzo to refresh the palate in between the two prawns. 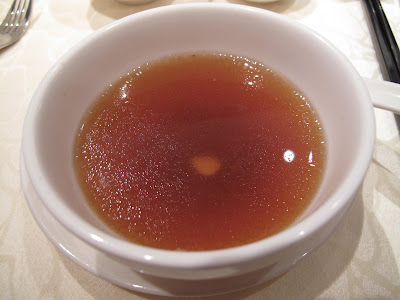 The soup course featured a double-boiled pork soup that was liberally seasoned with wolfberries, resulting in a deeply intense consomme that was also pleasantly sweet and invigorating, notwithstanding its heat. 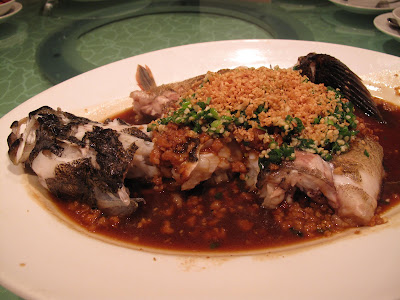 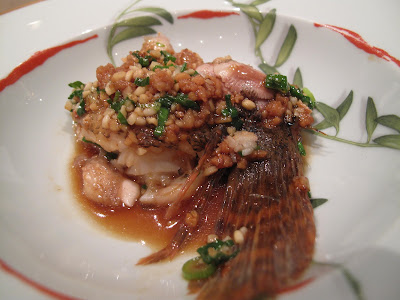 The steamed soon hock with minced garlic was a behemoth, but very fine: the flesh of the fish was exquisitely delicate, and its natural sweetness was enhanced by the slightly more robust notes of the garlic. I've often wondered why only Asians discovered the beauty of eating fish that has been simply steamed with some soy sauce, vinegar, Chinese wine and spring onions - the natural taste of fresh fish is infinitely preferable to grilling or frying. 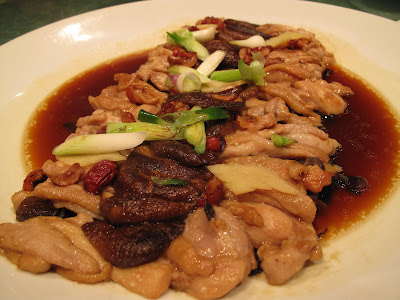 Some of the food at Tung Lok Classics borders on the tonic: such as the boneless chicken braised with shiitake mushrooms, red dates, ginger and spring onions. Juicy and tender, the chicken was brimming with the succulent savouriness of the mushrooms, and the mild saltiness of the light sauce. I don't know how to explain it, but eating this just makes you feel healthy, and unlike some Chinese herbal foods, the dishes at Tung Lok Classics do not taste fustian or unpleasant: quite the opposite, in fact. 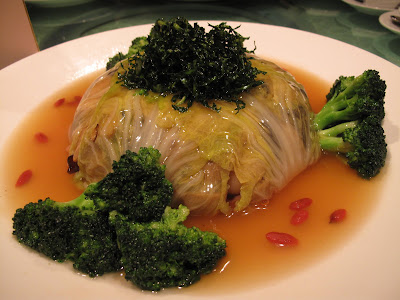 This beautiful dish resembles an enormous pearl, but the lustrous cabbage leaves in reality conceal a ball of mushrooms and water chestnuts, which, when freed from its nacreous shell, and paired with the verdant broccoli, created a sensational array of colours, tastes and textures. 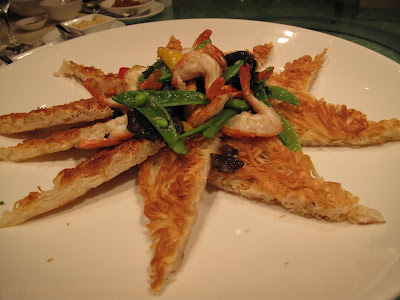 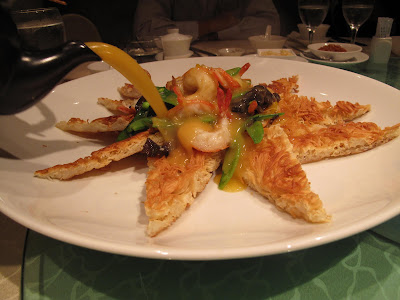 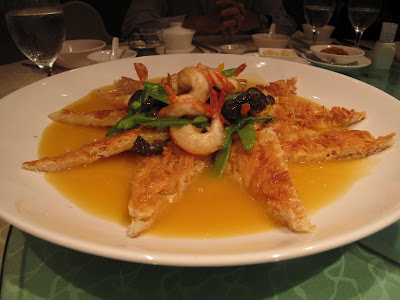 The noodle course was fairly unusual: fried Japanese noodles with snow peas and prawns, resembling an Oriental pizza, over which a thick, hot, luscious broth was poured, softening the noodles and serving as a sort of soup/sauce. I have to admit I didn't really enjoy this, not least because by this time I was rather full, but also because the noodles were still semi-hard and crispy (rather like uncooked instant noodles), while at the same time they were not dry. I suppose when it comes to noodles my palate is still somewhat conservative: they should either be wet or dry, but not something in between. 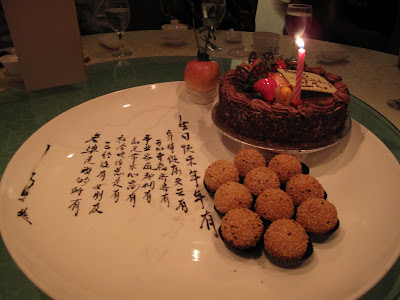 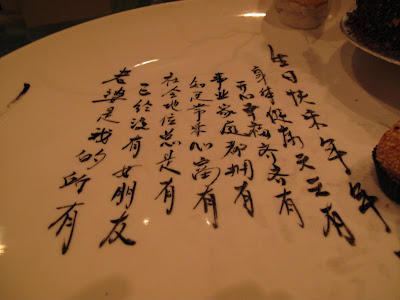 Where the restaurant truly excels is in its presentation of its desserts. The birthday cake was ours and the sesame balls were theirs, but the real star is the handwritten Chinese calligraphy in squid ink, with a personalised birthday poem from the restaurant staff. As if that wasn't awesome enough, they even gather round to sing you a birthday song (in two languages), and clap their hands while the head waitress reads out the poem in a sonorous cadenza. Now that is service. 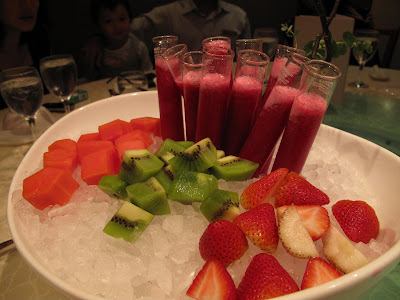 After that performance, the fruit platter isn't quite as impressive, but it is still quite a sight, the fruits nestling on a bed of ice, in which boiler tubes have been thrust, containing a chilled, vividly purple liquid which turns out to be a remarkably refreshing drink of kiwi and mango juice, with what appears to be some beet juice for colour. 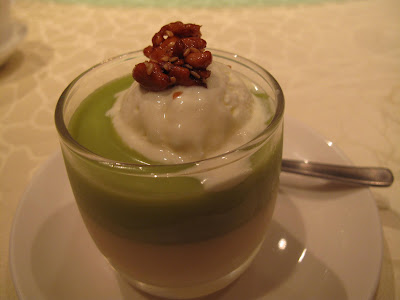 Finally, we round off with an unusual dessert of avocado jelly (more like a mousse, really) with soya bean cream. I'm not really a fan of either avocado or soya bean, but the other members of my family are, and they seemed to enjoy it greatly. I suppose it's a healthy alternative, as it offers all the creamy richness of traditional puddings, but without too much of the sugar.

Despite this being my maiden visit, I was suitably impressed with what Tung Lok Classics had to offer. The food was at turns excellent and inventive, while the service was uniformly warm and engaging. At the end of the meal, you're even given a Tung Lok Membership (depending on how much you spend), granting you a discount off future meals in order to entice you to return. It wouldn't surprise me if we returned even without the membership.