People always react with surprise, and sometimes a little consternation, on discovering that Japanese is my least favourite cuisine. In many minds, Japanese food is the embodiment of the heart and soul of food: fresh, fatty slices of otoro gleaming on shiso leaves, skilful chefs rolling up tubes of sushi in an assembly line so precise it takes a novice ten years to work his way up the various ranks, hungry diners slurping up steaming bowls of silky ramen noodles, and the onomatopoeic shabu shabu of ladles sloshing through flavourful steamboat broth.

I think part of the problem has been the fact that I don't like raw food (man invented fire for a reason), and the fact that Japanese food's very simplicity sometimes works against it: in my younger days I gravitated towards technically complex, well-executed dishes with lots of bells and whistles. That aspect of my bias has receded with age, only to be replaced with another: Japanese food (at least good Japanese food) is too expensive.

The corollary of that seems to be that if a Japanese restaurant is not prohibitively expensive, chances are it's not very good (and/or that even mediocre Japanese restaurants are very expensive). Which proved to be the case with En Japanese Dining Bar in Bukit Timah. En Dining has been around for a while: it's flagship restaurant is located at Mohd Sultan Road, and it has done well enough for itself to open another branch at Crown Centre, serving a wide array of food, from shabu shabu to sashimi to yakitori. 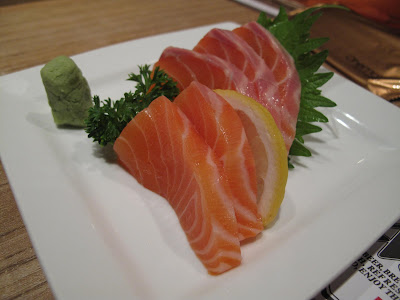 The salmon sashimi, for some reason, was not uniformly coloured, which troubled me slightly, but the flesh of the fish was smooth and creamy, so there was nothing untoward there. 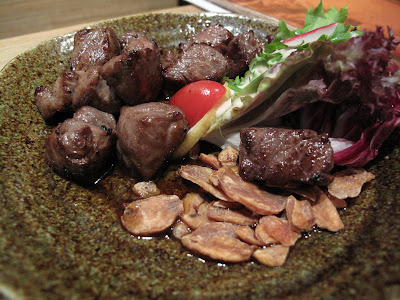 The wafu steak was exceedingly disappointing: it was cut up into little cubes, making the meat lose whatever tenderness it might otherwise have had, and accompanied by deep roasted slices of garlic but precious little else. The concept of a wafu steak, as I understand it, is that the Japanese have taken a quintessential American comfort food and reinvented it, as they have with much of American heavy industry or manufacturing. I would expect, therefore, a lovely piece of Kobe beef that's been seasoned with rice wine and shoyu, and cooked with the sort of perfection that only the Japanese seem capable of. En Dining's wafu steak was a pitifully far cry from that expectation. 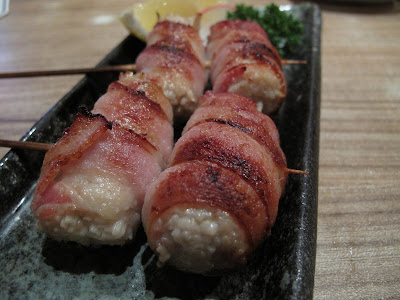 Skewers of enoki mushrooms wrapped with bacon are fairly de rigueur in yakitori restaurants, and these were fairly tasty, if rather greasy. 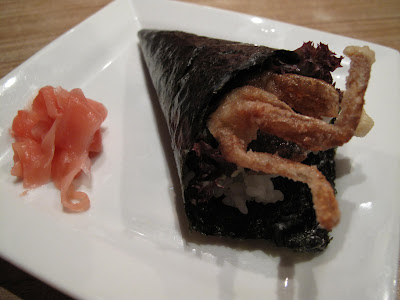 One of my preferred kinds of sushi is spider crab (te)maki, and while I found the seaweed wrapping to be too unyielding - I had some trouble biting through it and getting to the rice and deep-fried crab below - the rest of the sushi was enjoyable, though perhaps in future I'll order the maki rather than the uncut temaki. 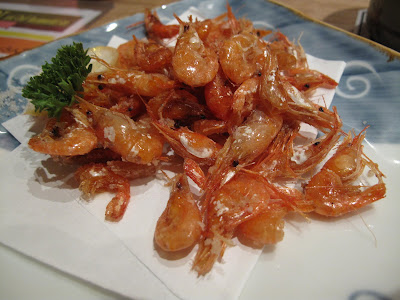 The crispy fried shrimp are as addictive as crisps; once you pop you can't stop... unless that is you pierce your gums against one of the prawns' sharp spines or shell segments, which I did. 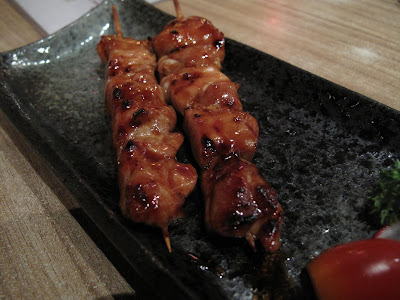 The chicken yakitori is delectable, glazed and caramelised with a sweet, umami sauce that makes the chicken cubes come alive in your mouth. 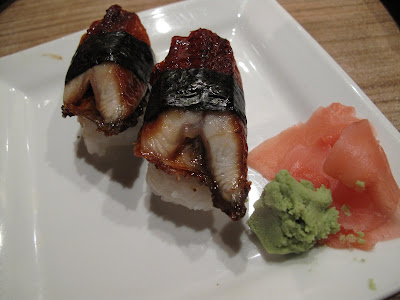 I quite like unagi: it's got a sweet, nutty flavour that is unique among seafood, and apart from Japanese restaurants, it's rare to see eel on the menu. Unfortunately, I thought the seaweed that was meant to wrap the sushi was much too short for its purpose, which resulted in the sushi coming apart when I tried to grip it with my chopsticks, making for rather messy eating. 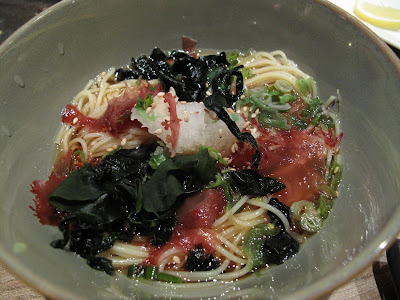 We ended the meal with a bowl of Okinawan soba, which was served with a very light broth, and a generous helping of vegetables like grated daikon, seaweed, and what may have been kelp. A pleasant carbohydrate course that also helped to wash down the sticky Japanese rice.

Overall, I was not greatly impressed with En Dining. The food quality is somewhat patchy, with some dishes being obviously more outstanding than others, and the variety on offer was also nothing to write home about. Service was pleasant enough, but that on its own is probably sufficient to make me return.

I'm Andy and I'm writing to you on behalf of a local restaurant, Galley By The Straits, to invite you to do a food review.

You see, I've actually been tasked by the restaurant to take charge of their online marketing. My company's Web Profits Lab (www.webprofitslab.com).

Part of the restaurant's online marketing efforts is to invite all the prominent local food bloggers to do a review of it. As such, we would like to extend this invitation to you.

The food for the review will be on the house. All we ask for in return is a fair review of the restaurant on your blog and a link back to it's website (www.galleysgourmet.com).

If you would like to accept this invitation, please reply via email at andy[at]webprofitslab[dot]com and I will arrange a suitable date & time for you to come down to the restaurant for the review.

Many thanks for your attention.

Personally, I don't quite like the Japanese food in Singapore. I always wonder why majority of the population seem to thrive on Japanese food. For instance, in any outing, everyone will suggest Japanese cuisine. by default. I agree that good Japanese restaurants here are too expensive.

The best Japanese food I have eaten are in Japan (of course!), which is why I always ensure I eat my full whenever I go there.