This past weekend, I had a sudden craving for coconut cake, inspired by a very old memory of coconut cakes from Goodwood Park hotel (anyone remember them, circa maybe 20 years ago?) It was also, I must admit, a result of having over-zealously purchased too much shredded coconut than I knew what to do with. Sadly, coconut cakes really seem to have gone out of style and it's hard to find a good one nowadays, one that is light rather than greasy and sweet rather than dessicated. It seemed the only solution was to turn to the cookbooks and even then, it was hard to find a recipe that was not overtly American. 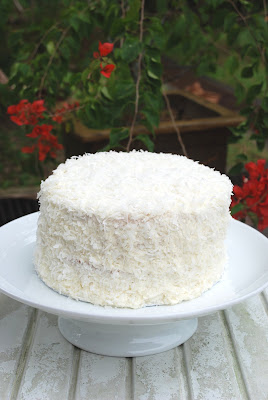 Luckily for me, my friend PL enthusiastically took up the cause, even sending me a copy of a recipe from her book, Breads with Amy. She felt the recipe looked the most likely to yield a moist and fluffy cake. I read it through it and the combination of cake and frosting seemed really involved but I was resolved that I had to do it properly, so off to the grocery I went for all the ingredients I didn't already have. 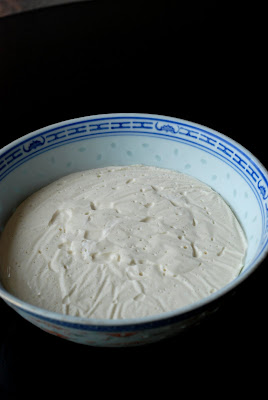 The recipe, upon closer reading, was really for a custard-like frosting, into which you whipped cream, to make it light and fluffy. Since the frosting had to be made the day before, I gamely opened up the cans of coconut milk and began to boil, stir and thicken the custard, then I added the cream cheese and vanilla bean but left out the white chocolate, as I didn't have a small quantity on hand.

I tasted the custard while it was still warm, liquid and thick, it tasted amazing, like solidifying coconutty but cheesy cream. The next day, I was gratified to see that the custard had set and the darkish vanilla bean colour had disappated into the custard. Now, it tasted like solid coconut cream- still amazing. I would definitely add the white chocolate, I believe it would have added a sweet depth to the frosting, lovely as it already was without it. 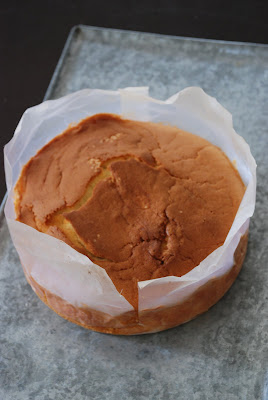 Onward to make the cake, which was a cinch and which came out well-risen and perfectly shaped. This cake does peak but it is really easy to slice up for layers, my only disappointment with it is that it is a little dry and it does not taste of coconut, despite the addition of coconut milk. I wished I had put in shredded coconut too because it looked and tasted pretty much like yellow cake. 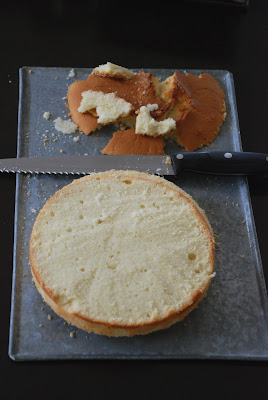 I whipped some cream and mixed it into the coconut custard, now, it was really heavenly. Light and cheesy all at the same time, even our helper, who is as picky as orthodox kosher, cleaned out the bottem of the mixing bowl and declared it "mmmm, very nice!" The only problem with the frosting is that as stated in the recipe, it's not as stiff as buttercream and doesn't really hold it's shape. 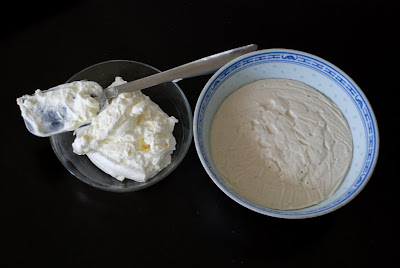 It can be used to stick the shredded coconut to the exterior of the cake but it doesn't really dry nor spread thick. If you want to stack layers, you should try to work in an air-conditioned space and adhere two layers at a time with just a thin layer of icing, then refrigerate the cake, to allow the frosting to harden slightly. Even then, given that I had four layers, the cake was not the most structurally sound and threatened to slide off its axis as I stacked and the frosting melted. 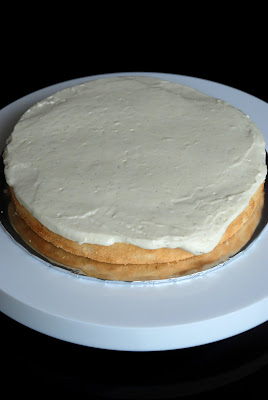 I think if I made this frosting again, I would use a denser, more moist yellow cake or even a sugee cake, for better crumb and texture. Or, I would use this cake recipe and frost it with some of that coconut custard mixed into buttercream, so that the outer layer could be piped and decorated.

Most importantly, I'd probably next attempt this cake when I had a big occasion for a four layered cake! It was so tall and pretty but most people, I've discovered, are entirely intimidated by a slice of four-layered cake unless it is a wafer-thin slice, so although it was all eaten up in the end, the frosting does only keep for three days and a cake this size would probably have been better received tarted up for a birthday party. 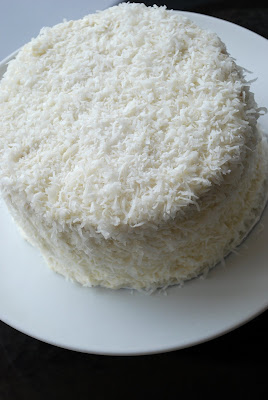 looks absolutely yumm-oh! i could finish one big slice no probs. now you got me wanting to make it too.

After all that seduction, and you're not sharing the recipe?! :P