Apologies for the dearth of posts recently, as I've been a little busy at work, and haven't been eating out very much, nor found much time to be blogging. 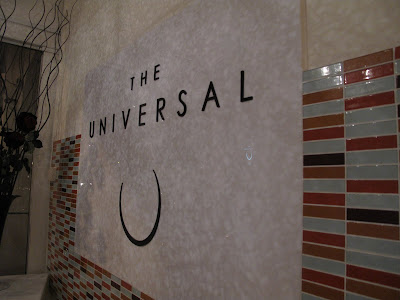 I know my sister has previously written about dining at The Universal here, but I thought I'd revisit the restaurant (and the review), given that it has been a while. 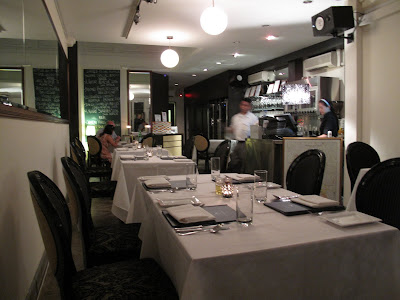 As it turns out, there have been a number of changes. The restaurant is much smaller, for one thing - the dining room now occupies only the ground floor, when it used to have a second (and possibly even third) floor - a sign that perhaps The Universal is not seeing as many diners as it used to?

Another sign is that the food, while competent, is no longer as inventive and evocative as it was when my sister first visited. Gone are the dishes that have been meticulously layered, taste upon texture, colour upon element. Gone too are the artful pastes, almost pastel-like in hue and consistency, enlivening steaks and filets with vibrance and panache. The conclusion I draw is that a chef, or perhaps the entire kitchen, has left, and if so, I'd like to know where he's gone...

What I do like, however, is the fact that The Universal offers both a three course set dinner menu ($55) and a four course chef's menu ($68), both of which are very value for money, especially since the four course menu gives you, in effect, two main courses. My only complaint, though, that I was not given more choice and detail as to what was going to be on the chef's menu; I would have preferred a pasta rather than fish course. 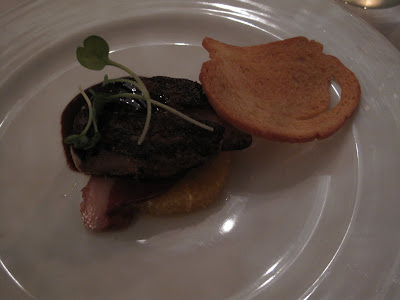 My appetiser was a pan-seared foie gras, served with a crostini, atop a rasher of pancetta and a slice of grapefruit. I thought the pancetta was unnecessary, as the foie gras is rich enough as it is, but the acidity of the grapefruit helped cut through some of that. 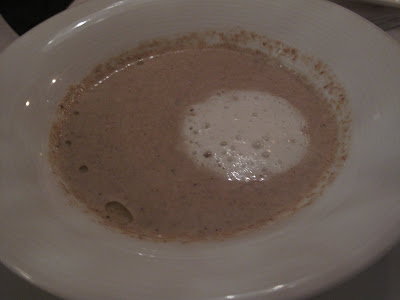 The mushroom soup was the first course in the three course set dinner, and was a tasteful affair, perfumed with some drops of truffle oil. Blended mushroom bits gave the soup some texture, but not, I thought, sufficient body: the soup was not as thick and luscious as it could have been. 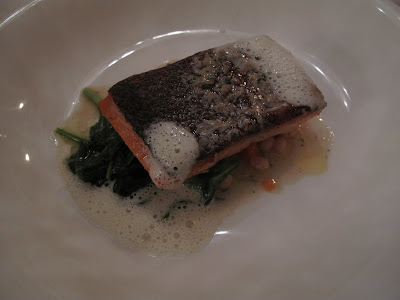 My first main course was a pan-seared salmon, served with diced root vegetables and wilted spinach in a butter sauce. While I am not generally a fish person, I thought this was quite well done: the salmon was sweet and soft, while the wilted spinach provided a hint of nuttiness, and the sauce enriched the entire dish. 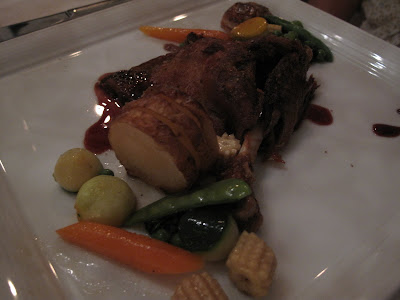 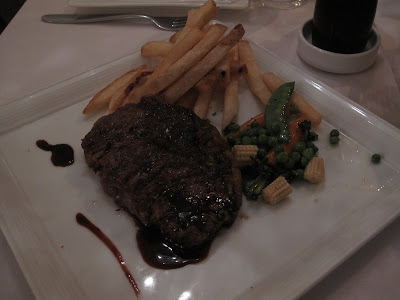 The main courses for the three course set were a choice between a fish main, a sirloin steak, and duck confit. The steak was extremely tasty, and accompanied with a dark, savoury sauce, as well as some excellent chips, which were crispy on the outside but soft and fluffy on the inside. The duck confit, too, was a winner: a nice crackly skin hiding fork-tender meat. 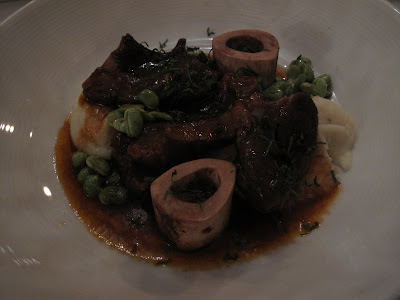 My second main course was osso bucco, served with what I think were edamame beans (though they could have been green split peas) and mashed potatoes. A sizeable dish, I could not finish the entire helping, but I felt the shanks could have been braised for longer to achieve that desirable falling-off-the-bone effect, and in order to further reduce the sauce to really provide a burst of meaty intensity. 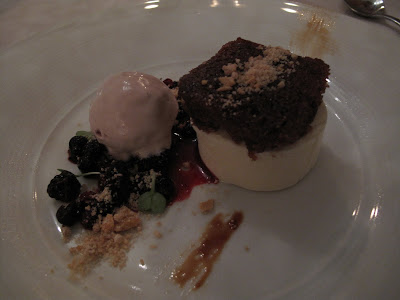 My dessert was a deconstructed cheesecake: a square of spongecake sitting atop some cream cheese mousse, with macerated berries and what I think was a strawberry ice cream. I quite liked the cream cheese mousse, but it was rather too rich to be finished, especially someone who's not that fond of cheese cake to begin with. 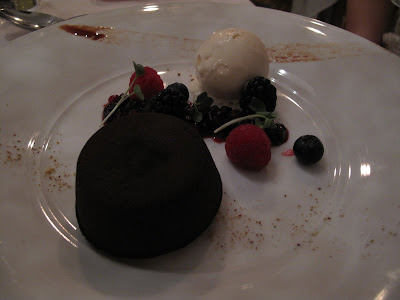 The regular dessert was the ever-dependable molten chocolate cake, though The Universal's offering that night fell a little short: the cake was somewhat over-baked, and as a result the inside was merely moist, and not runny. Which was a shame, as the cake was in other respects quite good - it was suitably rich and bittersweet, and of a fairly decent size.

The Universal has, unfortunately, dropped a few notches in quality, but it still remains a relatively sophisticated, almost debonair venue for a Friday night dinner for two, after work, amidst the tranquility of Duxton Hill.