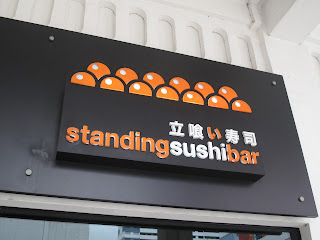 One of the great things about my present office, and something that I will definitely miss when I leave in a few weeks' time, is the fact that it has its own gym, which I tried to frequent at least twice a week. I like to leave the television on while using the gym, and during one of my last visits,  Channel News Asia was screening a documentary on how small business can use social media to their advantage. One of those small businesses that was featured was a restaurant called "Standing Sushi Bar", owned by one  Howard Lo, who some may better remember as one of the finalists in a "reality" show also starring Denise Keller. 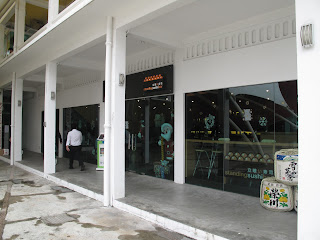 Standing Sushi Bar has two locations, with one establishment at the Singapore Art Museum in Queen Street (the other is at Marina Bay Link Mall), a great lunch location that draws office-workers, Singapore Management University students and probably not a few guests from nearby Carlton Hotel. 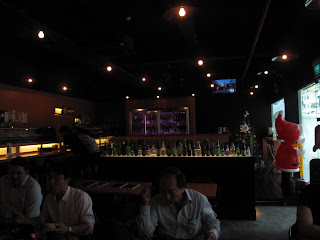 I was a little surprised to find that, contrary to what I had expected from its name, no one was standing. Presumably the name stems from an earlier point in the restaurant's history, but they couldn't afford to give up the goodwill when they expanded. 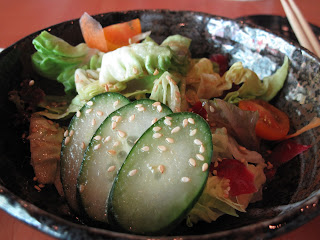 Our host had organised a set lunch for us which began with a light salad that was delightfully fresh: the cucumber slices were firm to the bite, the lettuce leaves were pleasantly crunchy, the cherry tomatoes were juicy and sweet, and the sesame seed dressing brought everything together in an understated liaison. 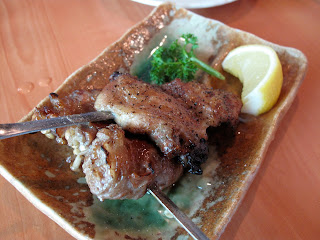 Chicken, mostly deboned or butterflied, and enoki mushrooms wrapped with meat, both cooked yakitori or kushiyaki, infused with grilled smokiness and drizzled with lemon juice, were a both excellent, and proved that Standing Sushi Bar had more to offer than just sushi. 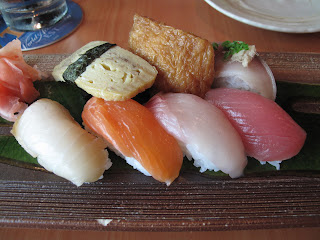 That was not to say, of course, that the sushi wasn't good; far from it. An assortment of sushi, featuring such stalwarts as salmon, tuna, mackerel, yellowtail and tamago, was beautifully prepared, with a topping that, if not generous, was at least decent, with just enough wasabi to keep things interesting, but not enough to steal the show. 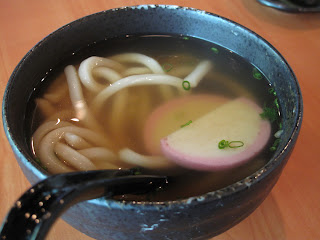 A light serving of udon to wash down the sushi. When I was a child, I had a particularly disagreeable bowl of udon while at Haneda Airport, and that memory has haunted me ever since, which is why I generally do not order udon voluntarily. I am happy to report, however, that this bowl of noodles was entirely enjoyable. 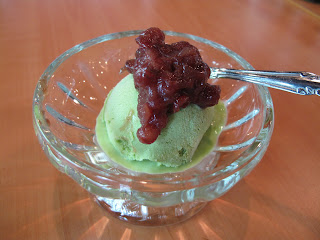 Dessert took the form of macha ice cream with azuki bean paste. I am not particularly fond of Japanese desserts, but then I generally find that nothing really goes wrong with green tea ice cream.

Standing Sushi Bar, from what I can see, is not, and does not aim to be, a cutting-edge restaurant determined to push boundaries and challenge assumptions. Instead, it is a relatively compact, introspective restaurant that's aiming to grow its business - which is basically doing familiar foods very well - not unlike the early days of the Akashi. Set menus (set menus are offered for lunch and dinner at the Marina Bay Link Mall branch) and promotions (see the website) form part of that strategy, which seems to have been successful so far.