Miscellaneous Food: Heston Blumenthal at Andre - The Evolution of Taste I was really blown away by a recent dinner, where I was lucky enough to be an invited guest at a womens' event. The funny thing was, I didn't know if I had been included until the day itself, which meant that after work, I was dressed up and still not quite sure if I'd any place to go. Although the dinner was headlined as Heston Blumenthal at Andre, somehow I understood that to be Andre takes on Heston Blumenthal's recipes. (You know, like the Youtube ones- yes, I was having an off day). To be honest, it was quite enough to be invited to dinner, surrounded by some wonderful women but.... 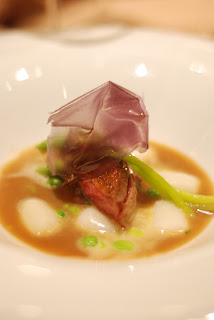 Imagine my surprise when I was shown into the restaurant and up the elevator and the doors open and I found myself face to face with, Heston Blumenthal himself! What exactly does one say in such situations? "Triple fried chips! Triple fried chips! Can we get a picture?" No, actually you talk about food in Singapore and what he has been up to recently. Then, thankfully, we were whisked away to dinner, a wonderful affair laid out by Andre and his team, so I was spared my own embarassing fan-dom. 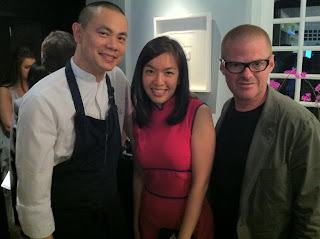 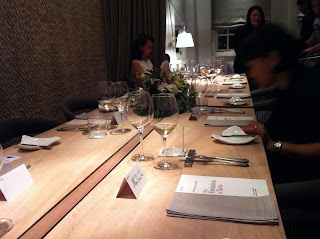 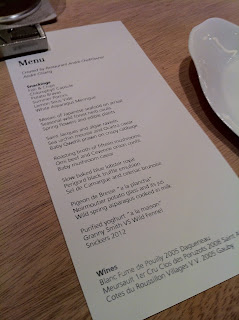 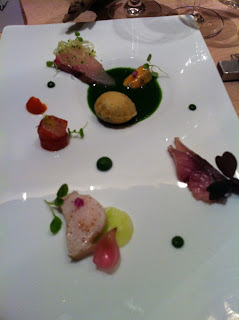 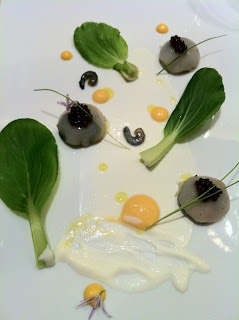 The first plate was an Andre classic and tribute to Japanese ingredients, the Mosiac of Japanese seafood on arrival (this was small bits and pieces of very fresh and rare sashimi), seasonal wild forest herb coulis, spring flowers and edible plants. This was followed by a second and then a third course, the Roasting broth of fifteen mushrooms (fifteen, woohoo!), Omi beef and Cevenne onion confit, baby mushroom caviar. 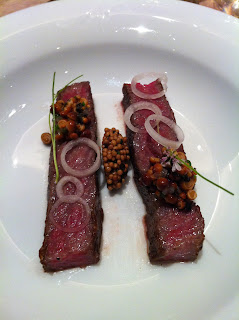 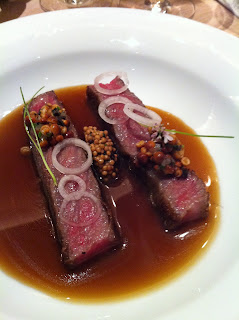 This was my favourite dish, two thick slices of beautiful beef, seared on the outside but with that distinctive Japanese pink marbling. The broth was then poured from a curved teapot into the platter and the combination was just delicate and yet meaty, luxurious yet light.  The dish that I pictured above was the last course, of 5 main courses, the Pigeon de Bresse "a la plancha" with Noirmoutier potato glass (a lovely smooth texture) and Wild spring asparagus cooked in milk. 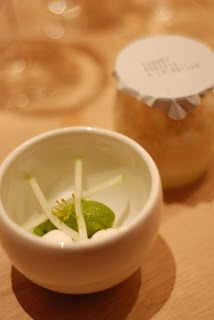 Dinner was for want of a better word, a remarkable and charming affair. It was like Andre but taken to a higher plain of dedication. Each dish was beautifully and I could tell carefully, prepared and service was as usual, impeccable. But then, we were all rather on a high to be joined by Heston at dinner- maybe even a good burger would have sufficed, so it was a treat that have such a lovingly plated meal and unlike most meals at Andre, this was really filling! 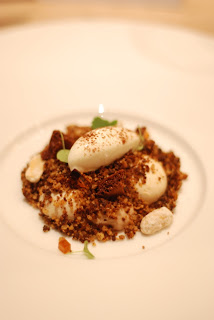 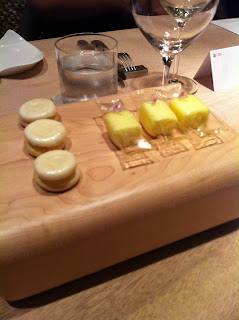 Dessert was not one but a trio of dishes, first the Purified yoghurt "a la maison" that came in the beautiful glass jar, Granny Smith VS Wild Fennel and the last, which was I think my favourite, Andre's classic Snickers 2012, which is a deconstructed dessert of chocolate, peanuts, caramel, freeze-dried ice cream. All the desserts were very tasty, with his characteristic balance of sweet and savory tastes.

The meal was complimented with some lovely wines and an amazing company of some very qualified and inspiration women. It was absolutely beautiful work and the two chefs clearly have mutual respect for each other's process- Heston complimented Andre on the food and the distinct pleasure of being cooked for, and Andre looked awed by Heston's later presentation and said he found his work interesting and inspirational. 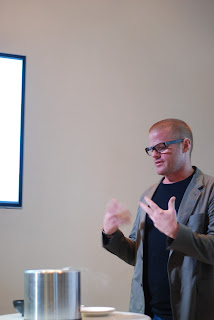 After dinner, we were treated to a demonstration by Heston and he explained his thinking behind experiential food. I had actually dined at the Fat Duck many years ago and had not been too impressed. While I liked the boldness of the food, I was put off by tastes that I felt clearly didn't go together, like passionfruit and oyster, as well as their admittedly snooty and unaccomadating service. I didn't quite understand what he was trying to accomplish and remembered only a vague combination of tastes and flavours. Why would you pay for that, I wondered, why had we driven hours to Bray to be subjected to this weirdness? The only dish that really stood out for me at his restaurant was the most familiar, a slow-cooked beef with a creamy potato that completely overwhelmed me with its concentrated strength of flavour and made me realize that he indeed was a superb cook. (I just wished at that time that the whole meal had been such).

I guess what I didn't completely understand was the thinking behind why and how he had put together his menu. Taste, he explained, was an evolution of the five senses, the five tastes and the important ingredient of memory. By combining tastes, he was making us question why we liked certain things together and why we were unable to accept certain other combinations (like oyster and passionfruit, for me). Why do we think that ice cream and chocolate go together, or Oreos and icing, but not sweet and salty flavours- when sugar actually enhances salty flavours like olives?

He explained that the ability for our tongue to taste different textures and tastes at different times and in various parts of our mouth, is further complicated by the introduction of senses, other than taste, like smell or hearing, or memory. He did a test with his bacon and eggs ice cream- tasters who were played the sound of bacon frying and sizzling, were more likely to taste pork, while tasters who were played the sound of hens clucking, were more likely to taste egg, even though they tried exactly the same item. It is the role of the brain in connecting sound to taste, or even memory to taste, or smell to memory- for example, does the smell of sweet extinguished candle smoke make you think of birthday cake from your childhood? Or how about when lemongrass or jasmine macarons make you remember old memories from childhood visits to Thailand. Or the smell of liquorice, cinammon and browned sugar spray, would make you think of Hansel and Gretel and an old-fashioned sweet shop. 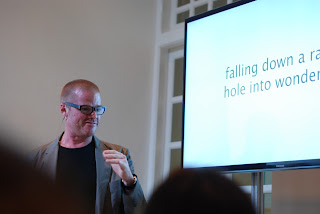 This is the feeling that he tries to capture in his food, distilling the evolution and evocation of taste. He explained the process of some of his more famous meal items, including the Mad Hatter's Soup, which is his attempt to recreate and riff off old Victorian recipes. He first creates this amazing consomme, then by freezing it and dripping it over a muslin bag, he concentrates the flavours without reheating, which changes both the content and taste. This is then jellied and wrapped in thin gold foil, into the shape of a wristwatch. The idea is that these are brought to your table in a ticking watch box and you then stir the pocket watch into a cup, all symbols from Alice in Wonderland, then you get completely surprised at the end result.

I don't want to spoil the surprise, except to say that Heston was way ahead of his game. He had conceived this, indeed this forms the Forward of his first book called Heston at Home, Simple Recipes for Home Cooks, way before other chefs were even developing the techniques and while building his arsenal of cool, scientific laboratory toys, he had already done research into old recipes and reinvented the theatre of food- different animals that were stiched together and meats that were glued together to amaze the senses, liquids that tasted cold and hot in the same sip, reindeer ice cream on caramelized brioche french toast, incense and extracts from 2000 year old frankincense from Oman. The resources but moreover, the dedication that he brings to food history and cooking, is astonishing and I felt very blessed indeed to be part of this wonderfully curated and educational event.
Posted by Weylin at 10:17 PM