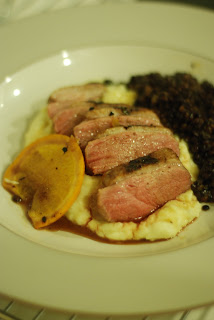 This weekend, I decided to take on a Duck L'orange in the Sous Vide. I checked up several recipes, deciding between a charred orange Cointreau recipe here and balsamic honey recipe here. I went to Hubers for some duck breast - for a more economic option you can head to your nearest wet market but I decided to be a bit lazy and treat myself to some beautiful, cleaned cuts of duck breast (below). 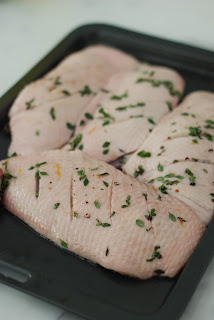 I scoured the skins of the ducks and then marinated it with sea salt, pepper, orange peel, thyme and balsamic vinegar. The other seasonings that I saw were Chinese 5-spice mix and dry rub. Then I popped them in the bag and Sous Vide, for 2 hours at 57 C, which the temperature recommended by the many blogs and recipes that I looked up online. 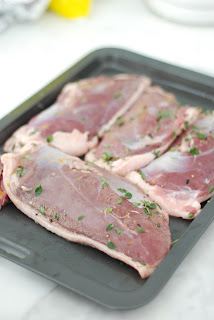 On reflection, the orange peel doesn't really come through after the cooking and I would have cooked it for slightly longer, because as you can see from the photograph, although they were totally cooked, I would have liked it slightly less pink and bloody. I think 3.5 hours would have been more suitable. You should also leave it in the water bath, prefably up to the time that you are ready to sear and serve.  I pulled it out at 2 hours and then returned it to the water bath when I was ready to sear, in retrospect, that was a waste of effort and electrical energy. 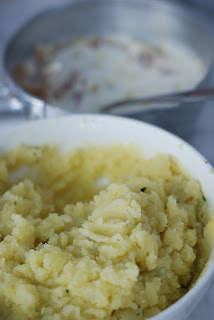 I also sous vide some skinned potatoes. I'd watched Heston Blumenthal's video for the perfect potato mash, in which he recommended waxy potatoes (I used waxy thin-skinned red potatoes but I should have used the Australian washed potatoes). These need to be cooked at 70 degrees C for a half hour- this maintains the starch granules instead of having them break and flow forth with their starchiness- this was easier to do in the sous vide. Then, they were brought to a boil until soft and mashed. You are meant to push them through a ricer twice with 1/3rd their weight in butter- so my second lesson was that this was both messy and I didn't have the right equipment! 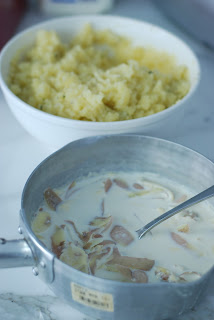 The other interesting step is that you are meant to use the potato skins and boil them in milk and cream. This infuses the milk with the earthy fullness of the potato skin and indeed, although I thought this sounded dubious, the resulting milk was the most potato-ey, earthy, full-bodied thing I'd tasted, absolutely like fresh potatoes but without their floury taste. Bravo! This is warmed and added back to the potato. To be honest, I found the only way to smoothen the potatoes (which I presumably had not boiled for long enough), was to put the whole thing in a food processor. The mash mellowed from the mash you see above, to the smooth, creamy texture on the plate, but it was still fairly bland, because I had neglected the salt and pepper in favour of the duck juices and also, it did still have small lumps in it- but it was really rich and tasty and I would definitely make it again. 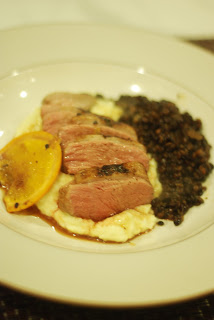 The last step, as you remove the ducks from the sous vide bags, is to pat them dry and sear them, skin side down in a hot pan. Before cooking the duck, you may want to heat up the pan and burn the orange slices on the pan, then de-glaze the pan with orange juice and balsamic vinegar to create a sauce for the duck. The duck breasts produce a lot of oil, which is always likely to back-splatter, making this a much messier enterprise than sous vide cooking would suggest. Spoon the hot oil directly over the duck to help cook and crisp up the skin, then reduce the heat and continue to brown, occasionally pressing the breasts down to ensure good contact between skin and pan. Rest for 5 minutes, then remove to a cutting board and slice.

The lentils de Puy were bought from France and these were just boiled (you can also sous vide, along with the duck and potatoes- talk about a one-pot meal!) with red wine, chicken stock, carrot, celery, tomato paste and onions. You can entirely use the sauce from Sous Vide Short Ribs as the marinade and cooking liquid for the lentils.
Posted by Weylin at 2:48 PM