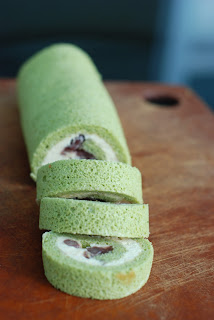 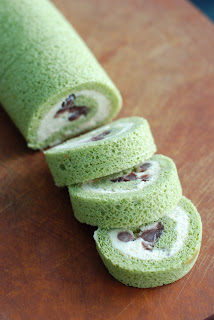 I'm not a huge Swiss Roll fan, in fact, I tend to find them slightly cheap. If you don't believe me on this, you should, for they are simply a commercial leavened sponge cake wrapped around what is usually a highly hydrogenated-fat filled oily cream. I make small exceptions for Japanese Swiss Rolls and that iced childhood favourite that no-one can not enjoy- Artic Rolls.

Swiss Rolls actually aren't that easy to make- genoise sponge is trickier than I think on most occasions. Hence, I've scanned the web to look for good genoise sponge recipes and have tried a whole bunch, I thought I would detail them here, to save you the time and effort of some duds.

This recipe is quick to make and everyone who has had it, loves the subtle flavours of the tastes and that it is not very sweet at all. The slightly thick, bean-y, musky adzuki cuts through the sweetness, as does the sharp, jasmined bitterness of the green tea. I often find myself as the touchstone for geriatric desserts (I attribute this to my baking quite often for my parent's friends and their biggest compliment is, "it's very good, not too sweet)- this is a sure win both for the non-sweetness and the nuanced yet very Asian combination of flavours.

I always have a tin of adzuki beans and salted caramel in my fridge, because I use both in macarons, but if you do not, I've included a simple and effective recipe (from Chef Pang of Canele and Antoinette fame, by way of Chubby Hubby) here below.

200g sugar
1 vanilla pod
200g cream
7g fleur de sel
140g butter, chilled
In a 1 litre heavy based pot, cook the sugar, stirring all the time to get an even caramel. Then add in the vanilla pod, scraped. Add in the warm cream a bit at a time as it will bubble up and splatter. Then add in the fleur de sel. Stir to make sure all the caramel has dissolved. Cool the mixture to approximately 40 degrees Celsius. Add in the well chilled butter, cut into cubes. Using an immersion blender, blend in the butter till you achieve a smooth glossy paste. Line the surface of the caramel with plastic wrap or greaseproof paper to prevent a skin from forming and chill in the fridge until needed. 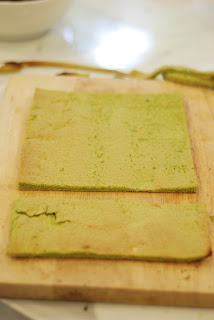 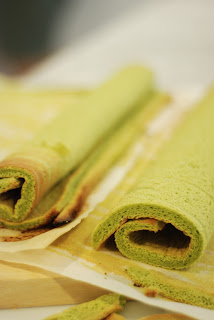 Sponge recipes are an odd thing, you would think that they are really homogenous but actually, they are not. Most of them toggle between proportions of 4 egg whites and yolks, 75g cake flour and 25g corn flour, 75g sugar. Some have baking powder while others rely only on the egg white for leavening. Some utilize melted butter (most do) and some incorporate cooking oil. Some require you to beat the egg yolks over a hot water bath and some have you merely beat them with sugar, using a wooden spoon (this tends to produce a stiffer, heavier batter). Most importantly, I find that the recipes tend to understate the amount of powdered green tea to use- most say 5g, but you should use at least two healthy tablespoons for a more pronounced, grassy taste.

I've tried Chocolate and Zucchini's recipe, both yield a sponge that is too dense. If you like a stronger contrast between a dense sponge and the light cream, then you should use those. I'm slowly working through several versions of genoise recipes and the latest one, which produces a loose sponge is the following from Nasi Lemak Lover here. I've been slowly trying and upgrading the recipe I use, but I can only eat my way through so many!

Method:
1. Whisk egg yolks and sugar over a pot of hot water till thicken and pale in color.2. Add green tea powder into egg yolk mixture, stir well and set aside.3. In another clean bowl, beat egg whites on high speed until foamy, gradually add in sugar and beat till glossy and soft peaks form.4. Take one-third of egg whites mixture to mix with the egg yolk mixture using a hand whisk. Then fold in the remaining egg white using a spatula until well combined.5. Gently fold the sifted flour (in 3 batches) into the batter. Take some batter and add into melted butter to incorporate and add back to the remaining batter and mix well. 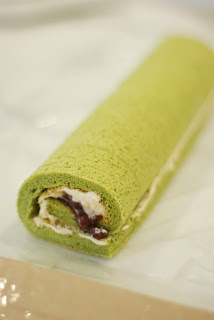 The most important part of genoise is the beating of the egg whites (same as chiffon cake)- you want truly stiff and firm pearly white meringue, not the sort of translucent egg whites where the bubbles start popping as you mix the batter- that sort won't give a good body or height to the sponge. It's also important that you mix in just a third of the egg white meringue into the egg yolk and flour, to give it some thickness- then add the rest of the egg white. Don't mix until every spot of egg white has disappeared, it's not quite possible and it's fine to have some remaining pieces of egg white.

Spread the batter thinly over 2 papered sponge roll pans and bake at 180C for 8 minutes. If you don't have jelly pans, you can use cookie sheets, or any shallow flat tray that has shallow edges. Take care not to bake it until there are browned edges- swiss rolls don't have crispy surfaces. When the sponge is baked, lift off the paper and while it is still warm, roll the sponge up tightly with the parchment paper. This helps to form the shape and pliability for the swiss roll- if you try to roll it only after cooled, the roll will tend to crack. Hold the rolled-up shape in position for awhile, then release it to cool, opened. I tend to like my sponge fairly thin and I use one recipe to two jelly trays, spreading it fairly thin. If you like a thicker sponge, then you should just make one pan.

When the sponge is completely cool, beat whipping cream with powdered sugar and a tablespoon of salted caramel. I use about 3/4 cup of cream with 1/6th a cup of powdered sugar. To get the best results and quickest whip for the cream, chill both the cream and the metal bowl in the fridge, in fact, I leave the metal bowl in the freezer for 15 minutes. I've tried stabilizing the whipping cream by adding melted and cooled gelatin- this method is suggested for strawberry short cake. For some reason (and let me know if you've had different experiences), the addition of the gelatin doesn't help my cream to set, in fact, it tends to have the effect of causing the cream to break somewhat. Without it and if you stop in time, rather than over-beating your cream, you'll get lovely, velveteen, tan brown swirls flecked with vanilla beans.

I also find it slightly too tedious (the extra step of fiddling with, melting and re-heating the gelatin) and it imparts a thicker texture to the cream that isn't really necessary, it's actually nicer when left delicate, lighter-than-air and with just the flavour from the salted caramel to tint it. It sets off the thicker sponge and adzuki better that way. It's for the same reason that you should never use buttercream for sponge rolls. Cream cheese or marscapone is also pretty disgusting. (If you do make a denser cream though, you must definitely make the lighter sponge). 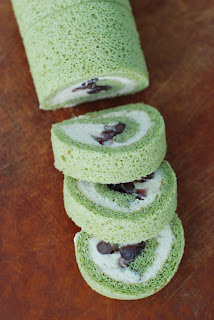 Unrolling your sponge roll, fill the edge (you can choose whether you want to roll on the short side or long side) with adzuki bean and then spread the salted caramel cream in an even and thin layer over the rest of the sponge sheet. Re-roll, keeping the roll nice and tight around the intervening layers of cream, wrap the wrong in cling wrap and refrigerate it in the fridge for a day. If you have less time, you can place it in the freezer for 15 min blasts to help the cream to set. I would also advise placing it in the freezer for 15 min directly before slicing and plating the rolls. 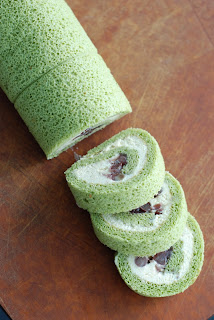 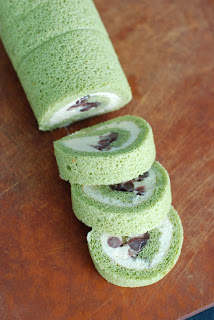 When plating, sieve a small teaspoon of icing sugar over the rolls and use a very sharp knife to slice the rolls evenly. Each roll should be about 1cm in width and if you've done it right, the adzuki bean will be nestled right in the center. They are an easy, sophisticated, cold dessert to serve and can be made way ahead of your dinner party. Enjoy!
Posted by Weylin at 11:31 PM