For some reason, when I tell people I'm going to be in New York, I'm often asked which Michelin-starred restaurant I'm going to be eating at.
Apart from the fact that (a) it's really expensive to keep eating at high-end places; and (b) they can often be quite inconvenient to get to, I actually get a bigger kick out of finding restaurants that are not only nearby, but are also the sort of place frequented by locals.
So I was not entirely sure if it was a good thing when S's fellow LLM candidate, an Englishman I knew from university, declared to us, while we were making our way to Il Buco Alimentari e Vineria, that that was the best meal he'd had in New York. "He's English", S whispered. 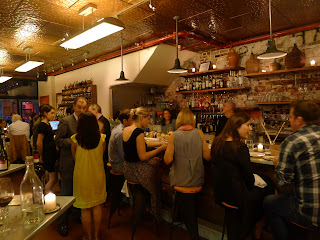 Still, signs were promising when we walked into the restaurant. A boisterous, casual Italian eatery, it was one of those charming places with a deli counter displaying home-cured prosciutto and handmade pastas, and lots of olive oil. Diner, deli and marketplace all rolled in one, what you get depends on when you drop by. 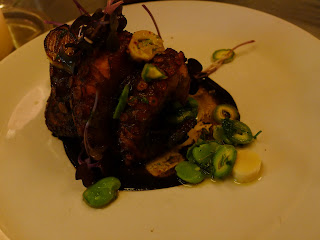 For dinner, we started with pulpo a la plancha, a dish of seared octopus served with fava beans and black garlic. A fist-sized octopus, perfectly grilled and smoke-charred, was meaty but supple, complemented by the silky black garlic sauce and crunchy split beans. 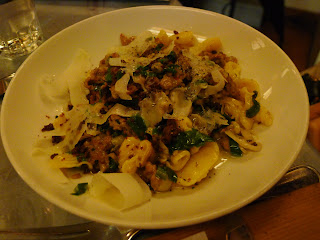 S's main course of orrechiete with a simple sauce of olive oil, parmiggiano and sausage meat was very tasty, if perhaps a little salty. Al dente pasta, as you'd expect from a restaurant specialising in freshly-prepared, rustic Italian cuisine, doused in extra-virgin olive oil that's been infused with the umami of the sauteed sausage meat, and the flavours of strong herbs like sage and oregano.

On hindsight, I really should have ordered a pasta as well, but I thought I'd be adventurous and have the slow-roasted short ribs with castelvetrano olives, celery, walnuts and horseradish. 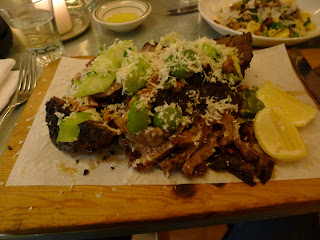 When the dish arrived, I was taken aback at the mountain of meat I received. If anything, it was larger than the steaks I'd had at Del Frisco's the night before. Not that it wasn't a fantastic cut of rib: I could taste and see that it was marbled through with seams of fat that made the meat both tender and irresistibly tasty. It also meant, however, that I was completely full after only after a few bites.

As much as I would have liked to have dessert, I had been completely done in by the ribs. Il Buco Alimentari does, however, offer a very tempting selection of home-made gelato and cheeses, as well as the usuals such as a panna cotta with a 10 year aged balsamico.