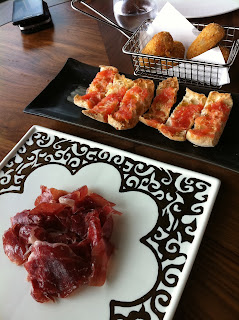 Both C and I have dined at Catalunya, not once or twice, but quite a few times. It is still one of the hottest (if not the hottest) large restaurants in Singapore and regularly has a waiting list of more than a couple weeks. Despite that, we haven't much to say about the place. Imagine that! Maybe it says something, that both of us have pushed off the review (to each other) back and forth, a few times. It says, probably, that there is nothing much to be said! It is a good restaurant, a nice restaurant, a perfectly competent restaurant. It is neither a special restaurant, nor really a very good value restaurant. 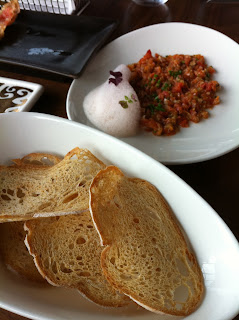 Let's start with the first part. It is a beautiful restaurant. It really is. You know the two glass bubbles in front of Marina Bay Sands Hotel- one is the LVMH store, one is Pangea (yes, continuing the trend of, what is this Singapore that we live in nowadays). Then further down, past one Fullerton, you have the Fullerton Bay Hotel and there is a raft of eating places there as well. There is a glass pontoon of sorts, that sticks out into the water. That is Catalunya and when you enter, the vista of the water, glass and view opens up in front of you. It is gorgeous. 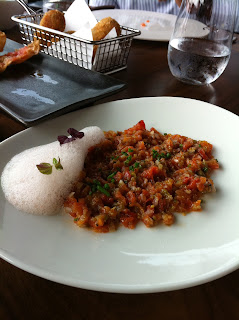 The buzz is hype-y, they play trance amidst leather cubby seats and huge green-leaf potted plants and the servers are from Seville, in their skinny black ties. By day, it is hip and modern and by night, just plain sexy and dimly lit. If you are new and looking to make a scene, this place is for you, if not, you might find it just a wee bit pretentious and poor value. The food, depending on how you think about tapas, is either excellent or no great shakes. We started with the traditional pa amb tomaquet ($8 - Catalan bread with tomato puree) and the tomato tartar confit ($18), both were vegetarian but with the mix of onions, salt and concentrated tomato, managed to have a rich and almost meat-like fullness of taste. 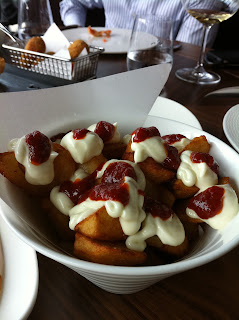 For me, I think the portions have diminished in size over time but the food is very good. It is very salty and it is very rich but I like it generally. The patata bravas, is really yummy, with the dollops of sour cream and ketchup. The batter for all their fried foods is crisp and light and smells cleanly of oil, not grease. I had also  the Lobster Buns and croquetas with jamon ($12++) and bomboletas ($10++). They were all clean, tasty and well, expensive. Imagine paying per piece, per guest. Yes, maybe you can say that dim sum is also the same but it doesn't add up quite as quickly. 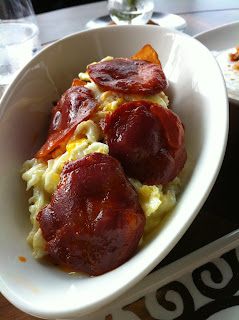 The mains are no less hard-hitting at $80 a pop. We had a lobster rice, very sticky, very soft and the lobster was definitely strong, but somewhat sour and overpowering. Then the piece de resistance, which is the suckling pig which gets carved up with a plate, at your table, presumably to show how soft it is. My advice though, is that if you go to Catalunya, don't get the pig. It is really expensive and it is frozen. 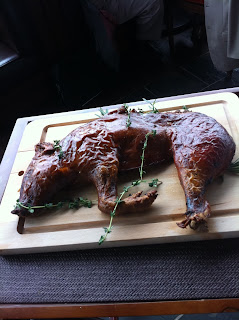 I may be biased about Chinese cooking, but seriously, nothing really beats a roasted suckling pig. This pig wasn't exactly roasted, it was somewhere between smoked and BBQ-ed but it wasn't crisp, it was soft and chewy and tender, but it stank. You know, that very porky smell that tells you it's been frozen before. I packed some away from the restaurant and by the time I took it home, it smelled even stronger. I checked with the restaurant on a subsequent visit and indeed, it is frozen, not chilled pig. 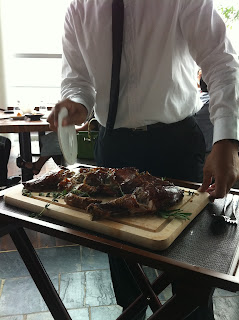 The thing is, this is not even how suckling pig tastes in Spain. It is much, much cleaner and fresher tasting. The version at Catalunya isn't bad, it's just...not great. But I think to a lot of patrons, it is really impressive and you can see how many little half pigs they run through in a day. The rest of the tapas, and the pig as well, may be classic Catalan cooking but it has definitely been jazzed up for the high-end consumption, so don't expect a rustic hillside or deep alley meal, that's for sure. 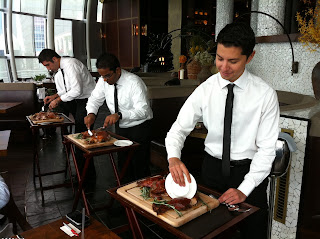 For desserts, we had the smoked ice cream and torrijas, soaked bread in milk. All the desserts were again, very milky, very rich and well executed. I like the use of the emulsions and espumas, and the food techniques used to coax an almost concentrated sweet and savouriness out of the ingredients. One example is the deconstructed exploding olives, which are $3 each (for a tiny mouth-feel), definitely different and with attention to detail. Catalunya is much the same, it is well-constructed and worth a visit for life's special in-the-moment occasion (particularly with their well-stocked bar and extensive cocktail list) but be prepared for the sticker shock and by the end, the invariably feeling of being just slightly underwhelmed. 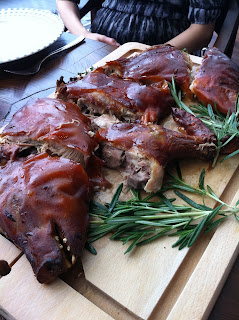 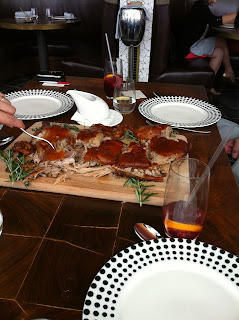 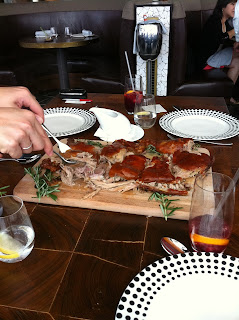 I literally just wrote a review about Catalunya too and it featured a lot of the dishes you tried! I completely, completely agree that the ambience is the only thing setting this restaurant apart from the rest. I found the food mediocre, and wasn't the suckling pig so overpriced for what it was?

We tried to look for your email contact but it does not seem to be available on your blog. So we are contacting you via a comment.

On behalf of the National Library Board (NLB), we would like to invite you to pledge your blog to the Singapore Memory Project (SMP).

We find that your entries about your culinary adventures would be a great addition to the Singapore Memory Project.

We think your blog would offer a different perspective. Whether your posts are an account of your daily life or an expression of your thoughts, our project hopes to find a home for these memories so that it can help build a ground-up understanding of Singapore.

If you believe memories are worth preserving, simply pledge your blog here: http://singaporememory.simulation.com.sg/Public/Pledge.

The SMP is a national initiative started in 2011 to collect, preserve and provide access to stories, moments and memories related to Singapore. For more information about this initiative, you may wish to contact Mr Patrick Cher at patrick_cher@nlb.gov.sg or read the FAQ.

[Simulation Software & Technologies (S2T) Pte Ltd. is the officially appointed vendor for SMP for the period Nov 2012 to Dec 2013.]