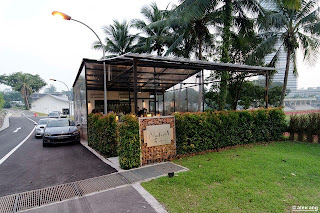 * I have given up on C finishing up his New York series, so you will have to wait for those posts to be resurrected as he is hard at work.

I don't know if you have been trying out new restaurants in Singapore but I have a bone to pick with these places, many of whom are more about style than substance. A clever marketing team, a neat logo and presto, a place with no consistency and standards. I'm not going to name names, as to which are the biggest culprits in the 'can't-really-cook' category but I've had a few run-ins and I suspect if you've wasted enough money and effort on the local food scene, you too will have an idea as to which to avoid. To add insult to injury, every restaurant with the slightest of repute is now full, from the start of the week, on Fridays, Saturdays, Thursdays and sometimes even Wednesday nights- craziness.

I'd heard a lot about the buzz about The Naked Finn before I ever stepped in and it started way back last Christmas. The small restaurant consists of a 16 seat bar counter and two tables for 6 (or 12 tables for 2) indoors, as well as three outdoor tables. I'd heard reports about the fresh seafood and the quirky atmosphere. I'm happy to report that both are true. The man at the helm of the restaurant, Ken Loon, is the same free-loving clever businessman who brought you Klee, the Portsdown bar with the great tropical fruit cocktails. Cocktails are also a strong feature at The Naked Finn but the bigger star is the fish.

I've been there three times now and each time, I'm drawn to the beautiful simplicity of the place. It's a plastic tarp, thrown over dark concrete H-beams, with a view that looks out to the fields and buildings down Alexandra Road. In the spartan colonial layout of the Gilman Barracks, the Naked Finn is a deep-set and lovely, if slightly pricey, find. The people who go there, are another reason altogether to visit, they are beautiful but certainly not simple, in fact, they run the gamut of complexity, skinny leggy young girls with cross-backed jumpsuits and swishy hair, old rich-looking couples who come in at 10pm just for their bowls of prawn mee, metrosexual men- tables of them and the occasional odd neighbourhood visitor, casually dressed in moccasins and a tee-shirt.

Ken himself, is a lovable oddball, a long, floppy-haired, musician-lookalike with braided bracelets and spindly knees. If you were having a bad day, you would probably not want to have a late dinner with a chef. Most chefs, despite their creative brilliance, are rather painfully obnoxious, and more counter-culture in flair than in thought. Ken is rather quiet, unassuming and usually clutching an illustrated book of crustaceans. His dedication to craft and food, is distinctly earnest and pedestrian. And yet, that is what makes The Naked Finn so attractive- the straight forward presentation, the nostalgic tastes and the basic but cheerful service (so very lacking in many local establishments). I'm told that they run through 300kg of fish in a week, which is amazing, given the small scale of the almost pop-up-like restaurant.

On two of the occasions, we had the Set for 4, which costs $360, on the second occasion, we supplemented this with a few additional side dishes to feed 6 people. Generally, the cost of dinner works out to be $70 per head, without drinks, but the food quality is high and seafood is never that cheap. Their dishes admittedly, are a lot more expensive than you would find at a zichar, but cooked with somewhat more refinement. We began with a sesame citrus mesclun salad, salt and pepper barbequed baby octopus (which had not be de-fibrulated, big minus for large sheaths of plastic membrane), four large scallops on shell, piquant cold bee hoon and fried kang kong, baby littlneck clams in broth, crispy skinned  hot, grilled barramundi served with cold cherry tomatoes and caramelized balsamic, large dark red prawns, fresh and sweet and a platter of lagoustines (they call them lobsters but they are more akin to yabbies). I will post some pictures but I'm always there late at night and the light quality is not the best, for pictures of all the dishes, visit their website or Alex Ang/Bibik Gourmond's annotated write-up here.

There was definitely more than enough to eat and the preparation and service was smooth and fast. The sauce plates of thai chilli, belachan and flavoured salts were constantly refilled and water was on tap, to keep costs low, they explained. If I had one compliant, it would be that the cold bee hoon and kang kong sides were served too early, rather than with the seafood. I would have liked more variation with the menu to include maybe a beef dish or some kind of fried potatoes or bread, but it was all very good. I'm not sure anything was truly sublime, probably the cold bee hoon and the littleneck clams, especially on a colder night, or with a cold glass of Sancerre or a Japanese grape cocktail, but it was a darn sight better than most restaurants I've tried in Singapore. Ken's passion for food, his spot-on understanding of market placement and his self-assured pricing, is really unique. If you have patience with the reservation line, it is really worth a visit, just don't accept an outdoor table unless you are young and willing to deal with the heat and rain.