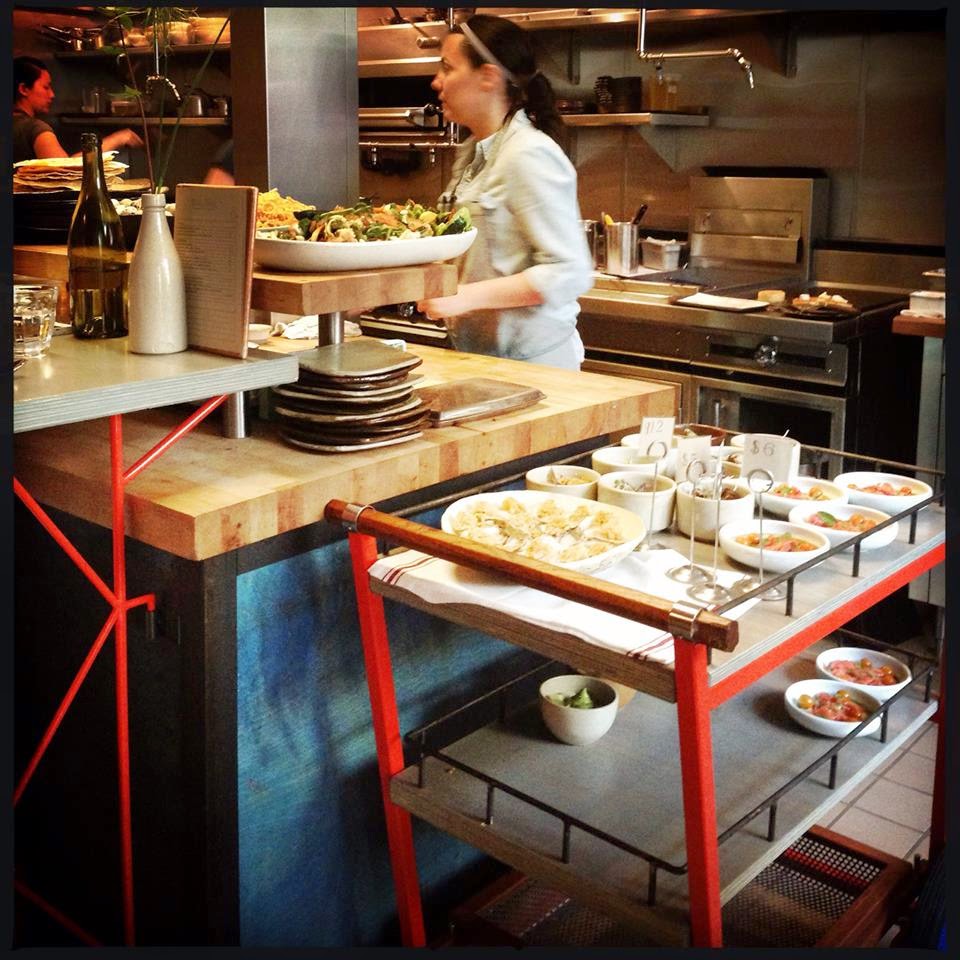 We ate really well in San Francisco. On our first day, we went to James Beard restaurant, State Bird Provisions. This was designated by Bon Appetit magazine as the Best New Restaurant in America, and our friend managed to get seats for us to try it. The meal is dim sum style, composed of 20 tiny shareable, small dishes and rotating menus of really interesting, local and fresh ingredients.

The place is tiny and chock full of tables, the total capacity is only about 20 people. From each corner you would see trolleys of dishes being pushed around, with a running commentary "Here we have chili spiced yuba with a parsley almond pesto, for $6," you might hear as a tray of dishes is set down on your table. "Those are veal-sweetbread polpette with blackened fig, also $6, and the bowl—that's whipped Haas avocado. We top it with this seafood salsa, which tonight is mussels, clams, scallops, calamari, and shrimp... that's probably my favorite tonight. It goes for $9."

It is one of the more free-styling food places I have been to and the energy and enthusiasiam of the place is infectious. The dishes tend to gravitate back to the same styles, burrata on fried bread (delicious), a lot of savoury and deep-fried foods like octopus, squid, corn balls and a copious use of pork belly and greens. I felt the food was alright, not mind-blowing but carefully prepared and fresh, but the concept and the crowd made it new. The price point was also incredible, we paid just $40 a person.

After dinner, our group drove to Smitten Ice Cream- a place that gained fame as a travelling truck with nitrogen-frozen ice cream. (This was back in the day, when it was really revolutionary to pour dry ice straight into a KitchenAid). I’m not a ice cream fan, especially on a freezing cold SF night, but the vanilla was absolutely smooth and very tasty. One of the selling points of nitrogen is that the crystals formed in the ice-cream are really small and therefore the overall taste is unfailingly smooth, instead of icy and this is true, I could not taste a single crystal in the ice cream, it was as if the whole thing was just made of magically, monotonously cold cream.

The next day, on a friend’s recommendation, I hopped onto OpenTable (great site) and scored a 5pm reservation for Frances, in the Castro. 5pm is a ridiculously early time for dinner, but it was the only available table for the entire week. When we arrived, I realized this is because the restaurant isn’t large at all, probably 30 seats in an L-shape, with cosy seats, a quiet environment and a peaceful, simple, pared-down presentation. I was quite sure the food would be spectacular, as they had clearly focused away from the décor.

As it turned out, this was probably my favourite meal of the whole trip. The menu changes daily and the all-male, metro-sexually groomed and “lovely, darling” wait staff were attentive and brought us hot water with a slice of lemon and crusty warm bread, without even being prompted.

I looked at the menu and was floored for what to order, everything was sourced locally and sounded amazing, for example, the bouchees were Monterey Bay Calamari, Roasted Garbanzo, Tomato and Summer Squash, Smoke Bacon Beignets with Maple Chive Crème Fraiche, Baked Cherry Stone Clams cooked with Fennel, Bacon, Kale and White Corn, Panisse Frites and Chickpea Fritters with Preserved Lemon and Olive Aioli and Charred Spring Onion and Sour Cream Dip with Nigella Seed Lavash, for $7 each. I mean, really?

And those weren’t even the Appetizers ($10 each), Entrees ($18-28 each) and Sides of Ricotta Gnocchi with Iacopy English Peas and Meyer Lemon or Baked Eggplant with Burrata and Roasted Early Girl Tomatoes for $8 each.

I challenge you to find me a top-end, beautiful, clean restaurant in Singapore that serves entrees that are not pasta for $28 each. Let alone one that does it with such a deep knowledge and dedication to the differences between local produce. In the end, we had the calamari, the Chilled Corn Soup with Sungold Cherry Tomato Puree and Cornmeal Crisps, which was smooth, cold and absolutely spectacular, and the Lucinato Kale Salad, Pecorino, Summer Stone Fruit, Spring Onion and Toasted Almond. With every bite of the salad, I tasted fresh white peach, toasted nut, caramelized onion and that crisp, dark green bitterness of kale, it was a really beautiful salad and one that inspired me to recreate my version here.

We had the Sonoma Duck Breast and Cassoulet of Butter beans, Summer Squash, Ancho Chipotle and Point Reyes Mozzerella, all of them bursting with flavour and summery vegetables. For dessert, make sure you have their ‘Lumberjack’ cake, they say that this is made fresh to the season with fruit, but it is no fruit cake, more like a well-baked, yet moist date cake with thin slices of Fuji apple, peach and coconut with a scoop of Maple Ice Cream. Really sublime stuff, I finished the whole plate before poor Z. could even look up.

The drive from SF up to Portland, was one of the most beautiful drives I have ever taken- the long straight roads, yellow dried fields and blue cloudless horizons of California, turning into swaths of everglades, green broad lakes and sunset hills resting atop clouds.

The charm of Portland, is that it melds the goodwill of a little town, where cars stop for bikes and pedestrians, with fairly cosmopolitan food and enterprise. Unlike in SF, where the immigration officers and all the other Asians will give you disingenuous looks, in Portland, you will frequently be the only Asian in the restaurant. This is like the Real America. Where men have beards and where there aren’t really many airports and when you show up with a bundt cake, they cut the whole thing into 6 equal chunks to serve (after a big meal). The America where there are deer by the roads and most people haven’t really stayed skinny.

On our first cold, peach-coloured evening in Portland, we went to Noble Rot, a restaurant where the main highlight is their rooftop vegetable garden and high deck overlooking the skyline of Portland. The food concentrates on vegetables, we had a colourful rooftop salad, with rhubarb vinegrette, quinao dumplings with fresh spring vegetables (carrots and asparagus) and steak.

The food was fresh, competent but not terribly adventurous, the vegetables were very clean and tastey but they did not taste of sunshine, the way vegetables taste in Tuscany. On the way back, we walked past Le Pigeon, which is one of the most famous places in Portland, but whose long lines had turned us off an early reservation. The food there is very modern American, in that it stretches to ingredients like rabbit and dill.

Portland has a variety of food trucks and stalls, these are really hit and miss, I had some wonderful snacks like caramel popcorn, and also some that tasted a bit mothy. My overall impression of the food trucks, particularly the ethnic food (read: Asian/African) is that they were really greasy and I wasn’t really attracted to patronise any, except maybe the burger vans. T

he next day, we went to Pok Pok, which serves Northern Thai food.To be clear, if you live in Asia and within budget flying distance of Chiang Mai or even Bangkok, there is no real need to go to Pok Pok, either in Portland or it’s sister café in NYC. (It seems all Portland successes make it to NYC, like Stumptown). But if you are in the continential USA, then Pok Pok is excellent- from their sharp and sweet drinking vinegars, to the delicious stewed pork and crispy fish that we had, it took me straight back to the strong flavours of the Northern border of Thailand with Burma.

It really hit the spot, in a little luau shack no less, with atypical indifferent Asian service and I was amazed that Portland had a clientele that could appreciate this. The restaurant also had a white cook, which I know is a politically incorrect observation, but increased my curiousity as to how they were so dedicated to their craft (and again, acceptable, as Singapore has this awful penchant for authenticity in their restaurants, from Chinese to Italian to Indian.

After a while, I was down to one meal a day (a frequent condition when I’m in the US and my body has just ceased to digest any more food). This we used for The Screen Door, a Southern restaurant – unfortunately, with only two people, we could not order much more than their buttermilk-fried chicken, okra and deep fried cornbread. While it was really good (and packed), I felt that the saltiness of their food, left the flavour somewhat blunted. I couldn’t really taste the nuance of the spices, through the heavy crispiness and saltiness of the oil and pepper.
Posted by Weylin at 11:51 AM