So we decided to go try the new burger shack set up by Island Creamery, only to discover, while looking for a parking lot, a quaint little place along Bukit Timah called "My Little Spanish Place". We ambled over to take a look, and after some confusion with whether or not the restaurant was fully booked, secured a table for dinner at the month-old restaurant. 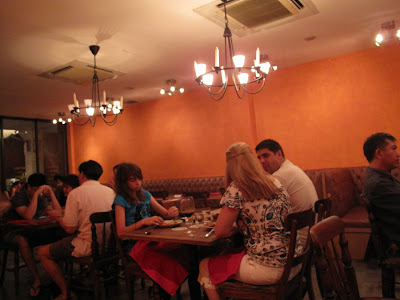 Barely a few weeks old, the restaurant was nonetheless almost completely full on a Saturday evening (we took the last available table), though that's partly due to the fact that it's very small. Helming the kitchen is a Spanish lady, while a young Spanish man I assume is her son takes care of the front of house, together with what appear to be a Singaporean couple. Ochre walls evoke an Andalucian feel, as if you've stepped into a Spanish hearth.

I was hoping to find that the tapas here would be affordably priced, but I suppose that was a little too optimistic given the location. Tapas range from below $10 to the twenties, with most falling in the teens, while the prices of the paellas start from $34 and increase with the size of the paella (e.g. for 2 or 4 or 8 to share). Still, price is relative, and depending on the serving size of each helping of tapas, the prices might not be that bad. 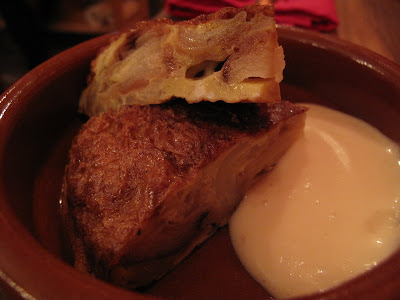 The tortilla de patatas was stated on the menu to be "Spain's national dish", and is really a sort of potato omelette. I'm not entirely sure whether this is meant to be served warm or cold, but the one I had was just barely luke warm, which may be off-putting to some diners. The aioli that accompanied the tortilla was rather good, however, with a silky sweetness that enriched the tortilla, though some lemon juice would have added balance. 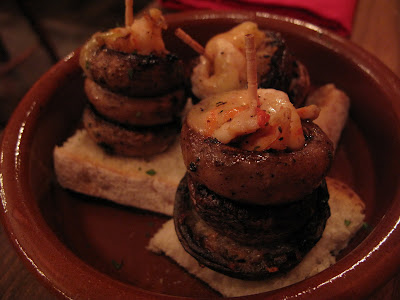 One of the pinchos we ordered consisted of skewers of baked mushrooms, topped with minced garlic and shrimp, on a bed of toasted bread. The bread was excellent, as were the mushrooms (which were bursting with juice and olive oil), but the garlic was not sufficiently cooked, resulting in a very pungent and bitter sensation when the whole thing was consumed. 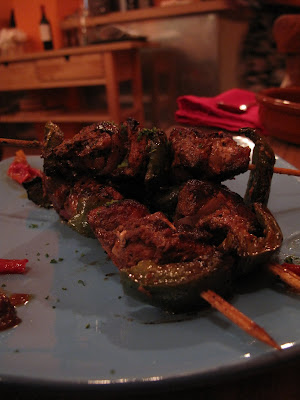 Next up was pinchos moruno, or skewers of grilled pork and green bell peppers. Sadly, some of the pork cubes were undercooked and still slightly pink, otherwise this would have been quite tasty, especially for the carnivore, as the pork had taken on a smokey char that accentuated its meatiness and gave it a texture not unlike beef. 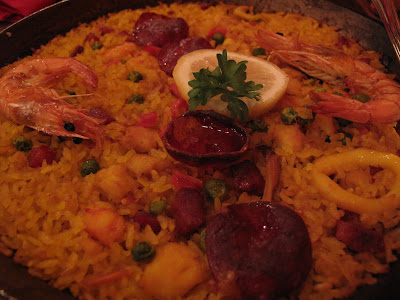 The house paella was filled with traditional ingredients like prawns, chicken, squid and peas, and featured the essential crispy layer of fried rice at the bottom of the pan, but I felt that too much oil had been used, leading to a rather greasy mouthfeel rather than that of smooth, glossy, saffron-scented rice grains complemented by a generous medley of ingredients. 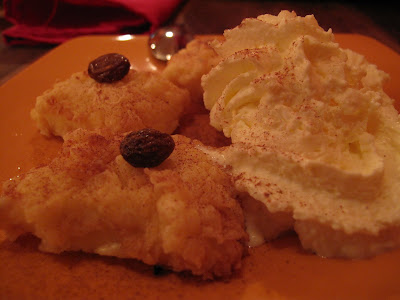 Unfortunately, they were out of churros con chocolate, but there was an intriguing reference to leche fritta or "fried milk" on the dessert menu. My curiosity piqued, I asked the Singaporean waitress what exactly "fried milk" was, hoping for some enlightenment as to the mode of preparation or at least a more evocative description which would enable me to have a better idea of what it was I was thinking of ordering. I was rather annoyed when the answer I received was, "er, it's like...uhm, I guess it's... fried milk." Quite apart from being totally unhelpful, that response suggests I am incapable of reading. In any event, she finally conceded that it was a sort of milk custard that was deep-fried, which, as it turned out, was exactly what it was. The texture of the custard was very soft, curdy and pillowy, while it'd been coated in rice flour, making it taste rather like rice krispies. Since both milk and rice are rather bland, some sweetened whipped cream was provided to make things a little more interesting.

My Little Spanish place serves up generally competent and authentic Spanish tapas cuisine, however, almost every dish was marred by a slight imperfection, which I hope is only because the restaurant is so new that they've not had time to iron out all the kinks yet. Prices are not exactly low, which is another reason to ensure the food is up to scratch: while there may not be many other Spanish restaurants around, I'd rather eat a burger than unsatisfactory tapas.

I remember eating tortilla de patatas in Spain and they were far from lukewarm. So maybe that's the authenticity of the dish at the restaurant.

We were in your photo (Imagine that) and being of Spanish decent can say the food is quite authentic. The price is a wee bit high, but I understood from the wiater that Singapore now allows direct import from Spain. Finally, here's a place that has REAL chorizo instead of the strange suasage most places serve (and still call chorizo). Tortilla is normally served either hot or cold, so luke warm is not right, but I suspect that they serve it luke warm instead of the "proper way" of being cold.