Trattoria Lafiandra started life as a tiny restaurant in Prinsep Street, and I don't recall being very impressed when I was there - the food was fairly cheap, but that was pretty much as memorable as it got. 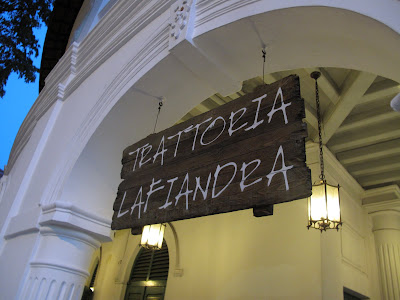 The restaurant has, however, either moved or set up a new location at the Singapore Art Museum, which is a good spot right in the centre of town, tapping on a ready supply of tourists and SMU students. The new Trattoria Lafiandra is also much bigger, boasting alfresco dining capabilities and could probably accommodate thirty diners easily. 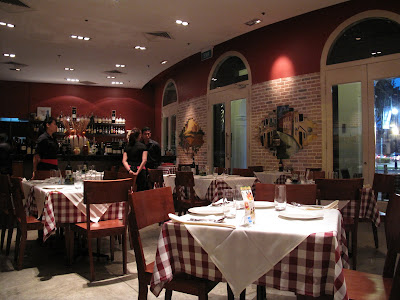 Trattoria Lafiandra has decided to opt for a traditional decor, with chequered tablecloths and trompe l'oeil wall paintings, making it seem as if just beyond the brick walls (also painted) next to you lie idyllic Italian scenes (e.g. wine by the seaside), setting the mood for a relaxing, hearty meal. 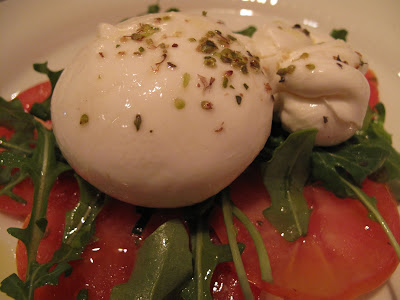 Fresh burrata cheese is always a delight, and the burratina alla coratina was very a enjoyable combination of a pillowy bag of curdy cheese paired with a sweet Roma tomato. I did not, however, notice any coratina olives in the dish. 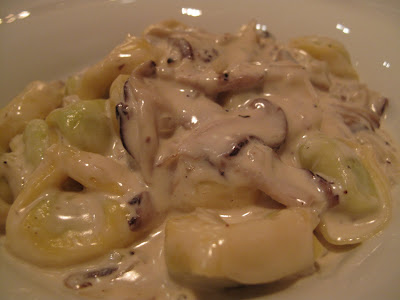 That good start continued with the pasta, a home-made tortelloni with mushrooms and cheese in a gorgonzola sauce. I was concerned the sauce might be overpoweringly strong, but oddly it was quite mild, and tasted much like a normal cream sauce. On hindsight perhaps we ought to have ordered the hand-made ravioli with ham and ricotta cheese in cream porcini sauce, but the tortelloni were satisfyingly plump and perfectly al dente, which is always welcome in a pasta. 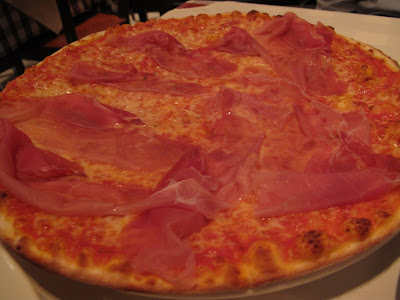 One thing the restaurant needs to work on is service. It's not bad (in fact the staff are rather friendly), but the problem was that the burrata, the tortelloni and the pizza with mozzarella and parma ham all came at once. This wouldn't have been so much of a problem if the restaurant had assumed, as I suppose they must have, that we were simply sharing the appetiser but having individual main courses (though I still think starters and main courses should not be served at once), but we had in fact intended to share all three dishes. So while it's true that we should have clarified that the three dishes should be served consecutively rather than concurrently, it would have better if the restaurant had asked if we intended to share, especially since that's what trattoria-style dining is all about, or at the very least waited till we'd finished our starter before serving us the mains.

In any case, the pizza was somewhat cold by the time we came to it, and I felt that it was a bit too floury and underbaked. In fairness, however, it was not drenched in olive oil, as some meaty pizzas tend to be, and the balance between the ingredients was well-managed: a sufficient quantity of parma ham with a light coating of mozzarella cheese - no unglamorous stringiness. 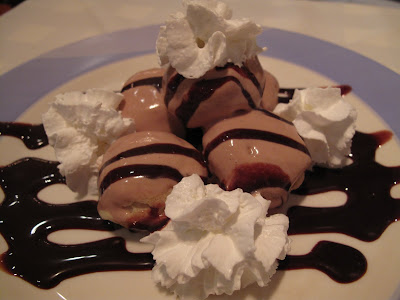 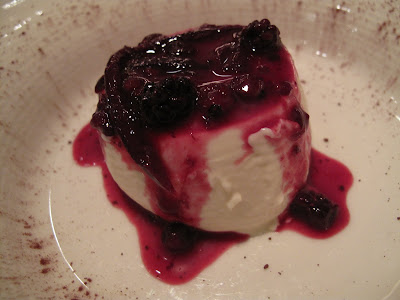 I didn't try the profiteroles, as I'm not a big fan of them anyway, but as usual, I couldn't resist ordering the panna cotta. Paired with a tart berry coulis, I thought the panna cotta was rather good. It wobbled magnificently, and if it had been just a bit less firm, it would have been exceptional. Be warned though, this version is made with what looks to be double cream, so it could be too rich for those who are on a diet in preparation for/because of Chinese New Year!

Trattoria Lafiandra has come a long way since its humble beginnings in Prinsep Street, and I'm impressed at the progress. Prices are about mid-range ($20ish for pizzas and pastas, as I recall), and there is limited free parking at the Art Museum itself (tell the security guard you're visiting the restaurant). Due to its location, Trattoria Lafiandra is not thronging with customers, which makes it an ideal venue for a stately business lunch, or a romantic dinner after a weekend date at the museum!

What a great resource!