Disclaimer: This meal was generously sponsored, but the content of the following review is entirely my own. 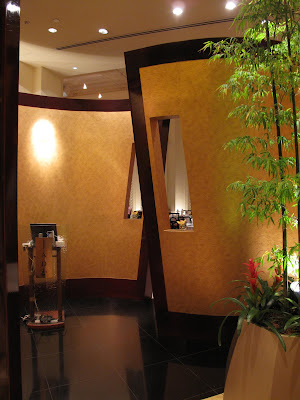 Despite the Fullerton Hotel being one of my favourite hotels, I must confess that I have very rarely dined there, and so I was thrilled to have been invited to a special Peking duck food tasting at Jade, a classy Chinese restaurant located on the second floor of the hotel, and one of the 10 restaurants featured in TimeOut's inaugural Dine Out Tasting Event. 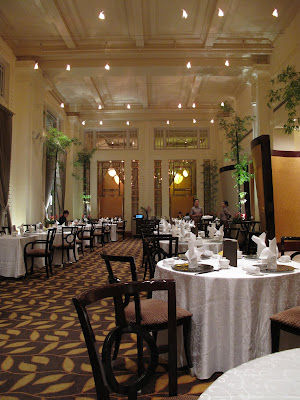 As it was a Sunday night, we had the restaurant virtually to ourselves, and we were able to drink in the beautiful setting: the delicately restored finishings of what used to be the old colonial Post Office; the carefully embroidered, virgin white tablecloth; and the tasteful use of verdant bamboo shoots all contributed to serene surroundings. It felt as if I was having dinner on the opulent set of the movie The Banquet. 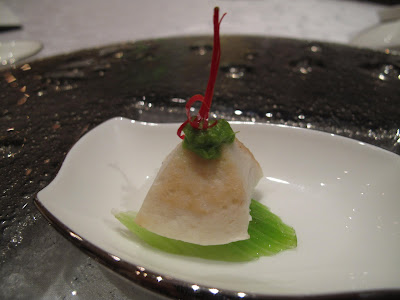 Our meal commenced with an amuse-bouche of chicken mousse, which was a small pyramid of chicken pate that had been slightly browned, served atop a slice of celery, which had been blanched and refreshed to preserve its emerald green hue. The celery was therefore fresh and crunchy, with the unmistakable tang providing a good counterfoil to the rich chicken mousse. 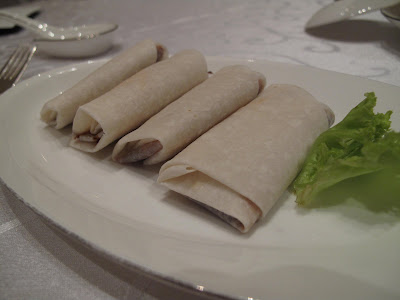 Our first course was a roasted Peking duck with marinated orange peel, hoisin sauce and cucumber wrapped in a Chinese pancake. Clearly an attempt to combine both such Oriental and Occidental classics as Peking duck and canard a l'orange in one dish, I felt this was let down by the dryness of the Chinese pancake, which tasted floury and chalky, rather than the smooth and elegant wrapping Peking duck is famous for. The zestiness of the orange, however, was an interesting tough, which worked better than I thought it would, cutting through the sweetness of the hoisin sauce and giving the dish an added complexity. 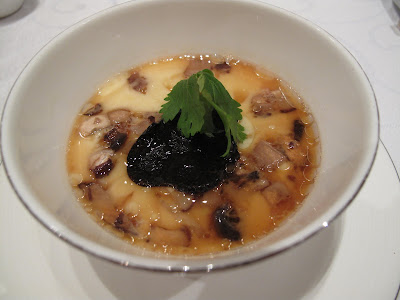 The next course was a luxurious silky chawanmushi with diced duck meat, wild mushrooms and black truffle slices. Sadly, Chinese truffles were used, so there wasn't the same sort of aromatic pungency, but the chawanmushi was excellent. It is always a great pleasure to eat a chawanmushi so smooth it feels like you're drinking a liquid rather than eating a solid, especially when it's flavoured with a rich, tasty duck stock and packed with cubes of wild mushrooms. 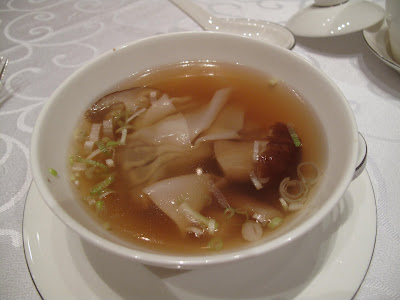 Our soup course was a duck bone consomme with duck meat dumplings, lemongrass, chilli, coriander and fresh porcini mushrooms. I was very impressed that Jade uses fresh porcini mushrooms, as these are extremely difficult to find in this part of the world. The consomme would have been better, I think, if the chef had not attempted to inject a Thai influence - drinking a spicy soup that was reminiscent of tom yam was somewhat disconcerting in a Chinese restaurant, and I didn't think the combination was successful. Nonetheless, the dumplings were exceptionally good, for they were full of meat, and the skin was so delicate and supple that it was a wonder they didn't simply disintegrate in the soup. 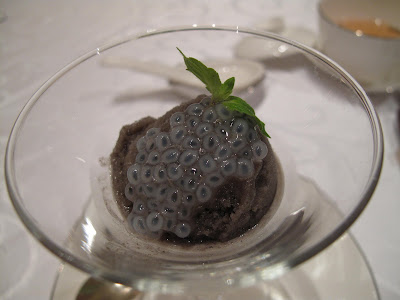 An intermezzo followed, in the form of a black sesame lemon sorbet. Clearly, the kitchen in Jade enjoys using exotic or unusual ingredients in surprising combinations, for this is one of the very few occasions I have seen sweet granadilla used as an ingredient. The fruit, which is closely related to the passionfruit, resembles frogspawn, but is mellow and sweet (though less so than passionfruit), and a little crunchy. The sweetness complimented the earthy nuttiness of the black sesame very well, while the hint of lemon, and the icy coolness of the sorbet, did much to cleanse the palate, in preparation for the next dish. 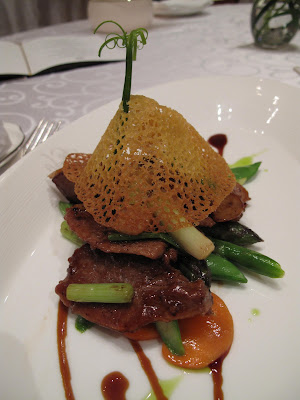 Sauteed Peking duck with pan-seared foie gras, roasted garlic and green asparagus was artfully cooked and presented, with a crispy, inverted basket adorning the dish. Pairing duck with foie gras is perhaps a bit rich, but I suppose that is not really a relevant consideration when eating a six course dinner. 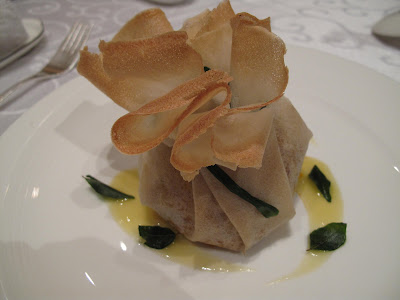 I was by this time rather full, but managed to find some space for the pineapple fried rice with diced duck meat, crab meat and nyonya chilli served in a crispy money bag. Here again, I felt that the creativity of the chefs had not been put to its best use: the strong taste of the nyonya chilli was not appropriate for the fried rice, which was otherwise extremely appetising, for crabmeat had been supplied in abundance, and the sweet fragrance of the pineapple had permeated the rice grains. 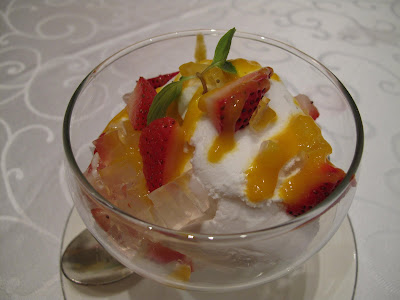 Dessert did not, unsurprisingly, feature any more duck. Instead, we were treated to a bowl of shaved coconut ice with fresh strawberries and mango cream. I always enjoy the heady scent of coconut, and when it is made into cream (or better yet, ice cream) without losing any of its allure that is even more remarkable. The strawberries were a little too tart for my tastes, but the mango sauce was satisfyingly sweet.

Overall, Jade's Peking Duck menu was not perfect, but at $58 per person, it is very reasonable for the generous amount of food you get, and one can't help but admire the chef's attempts to reinterpret some classic dishes. If duck is not your thing, Jade also offers a host of other set menus, with prices ranging from $48 to $98 per person, as well as a la carte dishes that are fairly affordably priced.