Disclaimer: A family acquaintance owns a part share in this restaurant, and was aware of our visit. I do not regard this as in any way compromising the honesty or objectivity of the following review, but you are welcome to form your own conclusions. 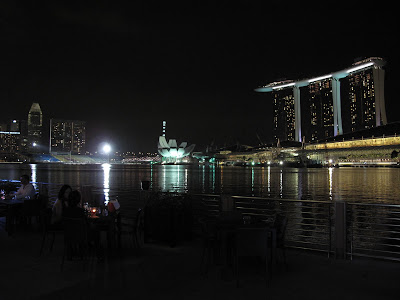 Regular readers will know that I had, not too long ago, visited Customs House along the Marina Bay waterfront, and extolled the virtues of the marvellous view one is afforded with during the day. Even more recently, I dined at the same area at night, and the view is no less enchanting. People are always asking me for recommendations of places to take their significant others on "special occasions", and there are few better places than the bay area, where you catch a concert or theatre performance before making your way over to the Fullerton district for a sumptuous dinner with a bountiful view. 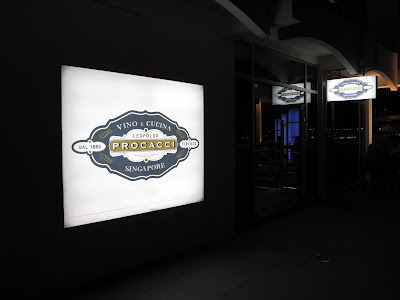 Customs House currently has a handful of restaurants, serving all manner of things from an oyster buffet to Cuban cuisine, but for the time being we were sticking with something safe: comforting and familiar Italian food at Procacci, which was originally (and still is) one of Florence's oldest gourmet shops specialising in truffle based products. The Procacci in Customs House, however, is a full-fledged Italian restaurant, started by a group of wine connoisseurs keen on importing the Procacci concept into Singapore. 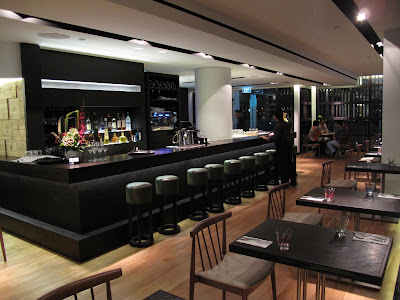 The interior of the restaurant boasts sensuality: light-coloured parquet flooring contrasts sharply against a striking, jet-black bar counter and dark mahogany tables. Thankfully, the restaurant did not subscribe to the popular habit of dimming the lights to create atmosphere - that might be good for whispering sweet nothings, but is terrible for photography. 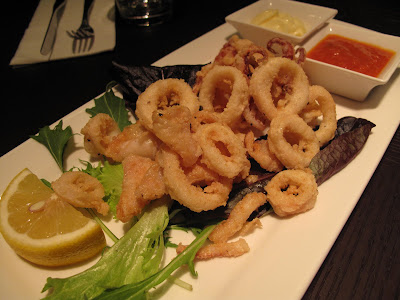 I generally do not expect much from new restaurants, but we all agreed that dinner that evening was rather exceptional, starting with the calamari, which is more often than not badly done. Procacci, however, got it exactly right: the squid was fresh, tender and succulent, while the batter was light, and fairly crisp (which is no easy feat in our humid weather). Unsurprisingly, the calamari was consumed rather rapidly. 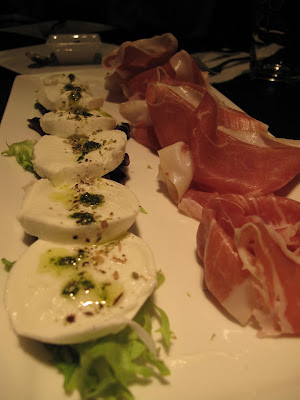 Next, we tried the mozzarella cheese, which was served in medallions that had had basil oil drizzled over them, and with thinly-shaved prosciutto ham. The ham, as you can see, is beautiful: glistening with a good quantity of fat that makes your mouth water just to look at it. The cheese was perhaps a little on the dry side, and the combination of ham and cheese, although classic in other contexts, is a bit too rich when it is just the creamy mozzarella and the oleaginous prosciutto. 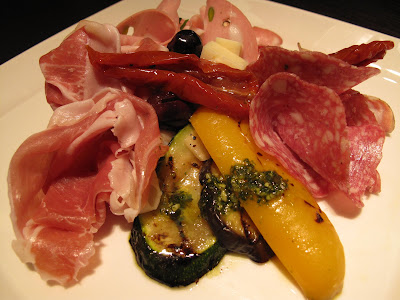 The salumi dish was a colourful medley of salami, pepperoni, mortadella, and other cured meats, mixed with various grilled vegetables, a few olives, and some sticks of hard cheese. Simple, cheerful and tasty - why can't all food be like this? 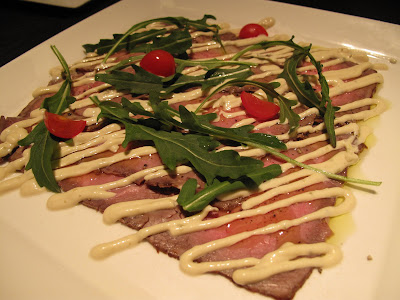 The final dish in our spread of appetisers was a vitello tonnato, or thinly sliced veal with a creamy tuna and caper sauce. In Procacci's case, I believe they use beef rather than veal, which is somewhat more humane. Again, I was fairly impressed with this: the restaurant managed to strike the right balance with the sauce, which was piquant without being overpoweringly salty or spicy. 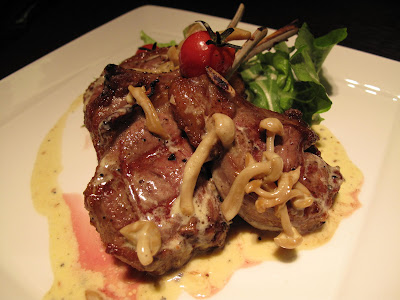 Moving on to main courses, although most of us were too full or unadventurous to order a main course (that was not a pasta), one member of our group took the plunge and settled upon the lamb chops, which came served with some white shimeji mushrooms, and were an excellent choice for a number of reasons. First, they had a sizeable amount of meat on them, and hardly any unappetising gristle or sinew; second, they were deftly cooked to a blushing rose; and third, they were robust and juicy without carrying an overly strong gamey scent. Easily one of the better lamb chops I've tasted in an Italian restaurant. 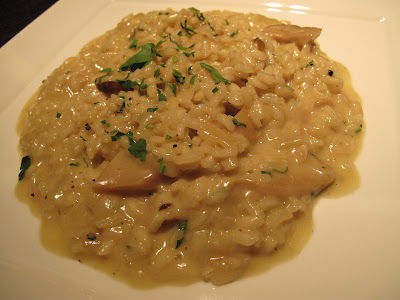 I ordered a porcini mushroom risotto, and was also quite pleased with my meal, as the rice was cooked al dente, as you can see: the grains melding comfortably into the rich, buttery sauce, and so nearly into each other, but retaining just enough of their individuality to be distinguished. The porcini mushrooms were fresh and meaty, while diced onions added a hint of delectable sweetness to the broth. 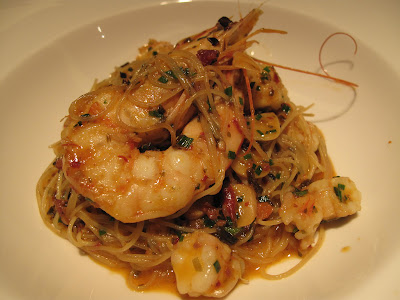 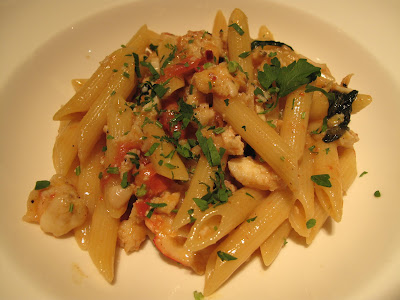 I did not try either the prawn capellini or the crab penne, but, as I did not hear any complaints from anyone who did, I assume that they both went down quite well. 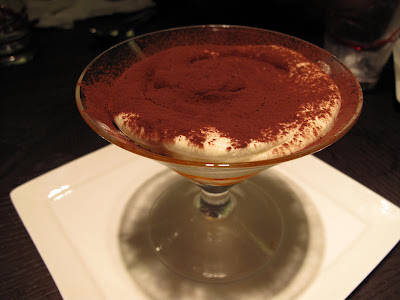 Again, we went slightly overboard with desserts and ordered a smorgasboard, beginning with the tiramisu, which I always find is a bit difficult to be objective about, because it's one of those things no one can agree on: some people like the sponge fingers swimming in coffee or alcohol; some people believe that there should be no alcohol, while others think there should be nothing but. Personally, I like my tiramisus a bit on the dry side: the biscuit base should not expel fluid when I bite into it, and the mascarpone/zabaglione should be stiff rather than mushy. Procacci's tiramisu satisfied my requirements, and while a bit low on the alcohol content, it was packed with caffeine, so it really would be churlish to complain. 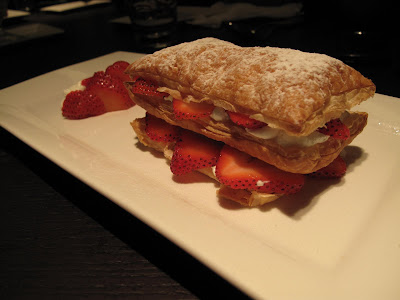 I cannot remember the exact name of this dessert, as it was in Italian, but it was described (not inaccurately) as a millefeuille. A picture is worth a thousand words, however, and this really was a gorgeously-presented dessert. The puff pastry had risen to magnificent heights, and the light dusting of icing sugar on top was reminiscent of a light snowfall, while the strawberries were a full-blooded, crimson hue. 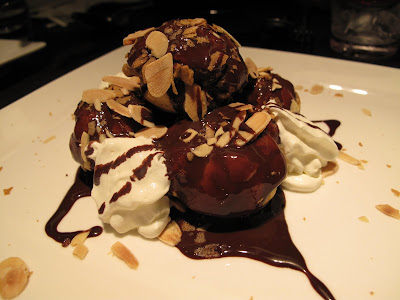 The profiteroles are filled with chantilly cream rather than vanilla ice cream, and are slathered with a dark chocolate sauce before being sprinkled liberally with almond flakes. 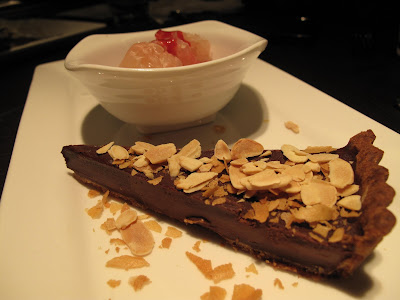 A similar abundance of almonds is to be found on the chocolate tart, which is a shame, as I hate almond flakes, but otherwise the chocolate tart was quite outstanding, as the tart filling was dense, dark, rich and intense, while the crust was savoury and crumbly. Accompanying the tart is a small bowl of citrus fruits, which I assume is to aid in cutting through the richness of the chocolate, though I think that is the point of dessert - no one serves ice cream with a slice of lemon, after all. 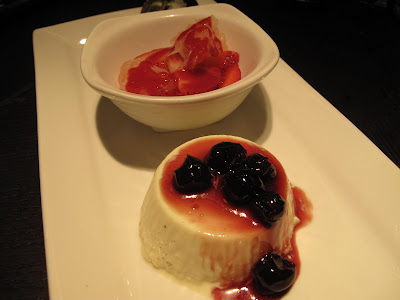 In any event, a similar bowl accompanied the panna cotta, which was very good. Wobbly, creamy and flecked through with vanilla beans, the panna cotta here is among one of the better ones I've had, which is saying quite a lot, considering my fairly high standards here.

If it's not already clear, I was impressed with Procacci. Italian food is frightfully common in Singapore, and often it ranges from uninspiring to downright awful. The food at Procacci, thankfully, is of a fairly high quality, and while prices cannot be said to be a bargain, neither are they exorbitant - they are on par with higher-end Italian eateries like Garibaldi or Oso - and for what you get, I think it's worth the money. Perhaps, even, the place to splurge for a "special occasion".

The prawn capellini is awesome!!!

Wow - my mouth is really watering. Great photos. I was recently wondering about the restaurants at Customs House. I have only been to Kinki, but my next stop will definitely be Procacci. Great blog!