"Where's that?" my father asked me blankly, after I told him that he should drive to Customs House. I had, it seems, mistakenly assumed that Customs House was a well-known landmark like Revenue House or Capitol Building, when in fact, Customs House is an extremely new development near the Marina waterfront. 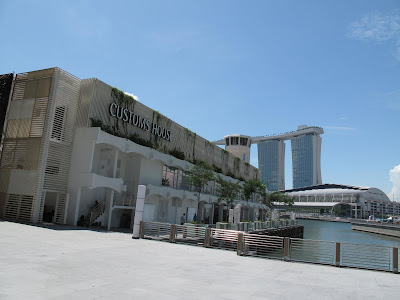 This places it in the enviable position of having the Marina skyline, and the impressive Marina Bay Sands, as its backdrop. Not bad on a cloudless day with an endless blue sky framing the rather picturesque scene. 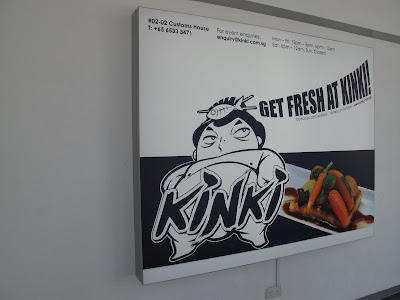 Customs House, however, is a rather inaccessible location, as it presently lacks its own carpark, and since Kinki is on the second floor of the building, I might never have found it, were it not for the rather prominent sign displayed on the ground floor. 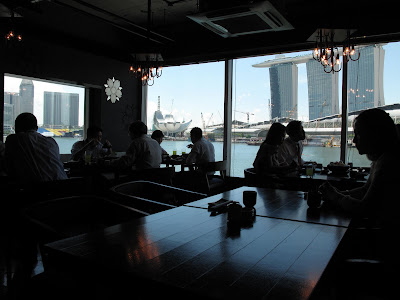 The restaurant is rather dark on the inside, which allows for some stunning vistas over the bay as you're enjoying your chirashi. 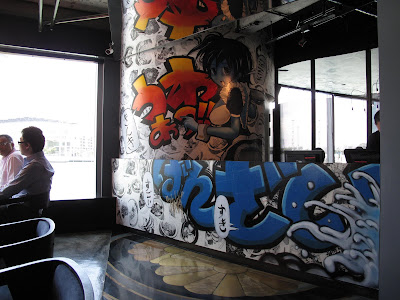 Some funky artwork reminds you that you're not in a traditional ramen house. 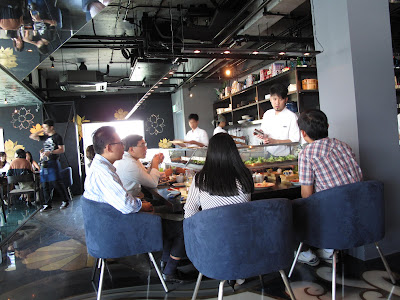 Although there is a sushi counter, where I suspect (but am not sure) you can probably order omakase or be otherwise entertained/enlightened by the sushi chefs, as appears to be the case here. 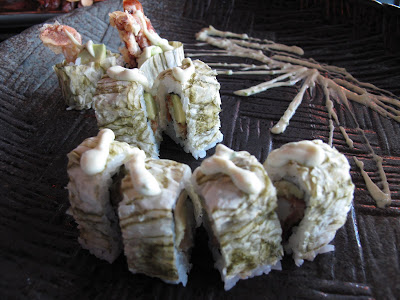 Kinki boasts an impressive sushi menu, with three types of tuna (regular, medium fatty, and fatty), two types of eel (fresh- and saltwater), two types of prawn (regular and sweet prawn), as well as a slew of other exotic seafood. Beyond that, there is also some fairly elaborate sushi which are the unique creations of the restaurant. None of this comes cheap, however; I opted for a fairly simple Spider maki, and even that cost close to $30. I didn't even think the sushi was that good - although the layer of rice was not thick, neither was there a very generous helping of soft shell crab. In fact, in some of the sushi rolls, I could hardly tell that there was any crab at all. 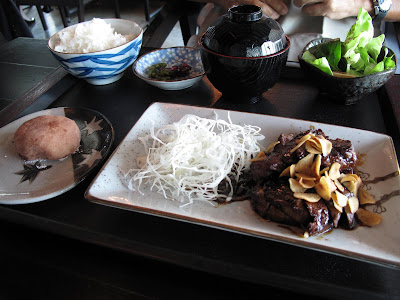 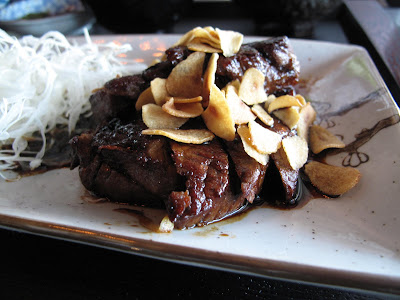 Most of the diners that come to Kinki for lunch order set lunches such as the Donburi or sashimi sets, but there are also more meaty offering like the garlic beef set ($28). US prime grade beef is served with crispy fried garlic slices, together with miso soup, salad, and a mochi ball for dessert. My father was instantly dismissive, however, of the fact that the rice used in the set was (what appeared to be) ordinary Thai rice, and not Japanese sushi rice. 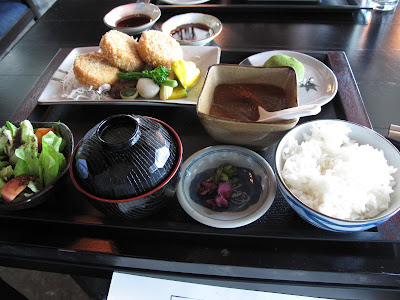 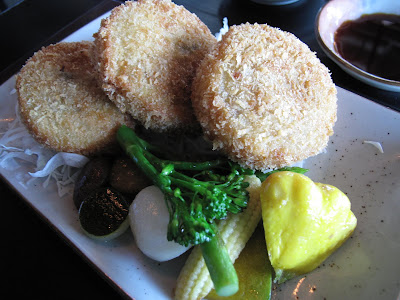 I decided to have the kurobuta katsu curry set ($22), which came with three medallions of pork, battered, coated with bread crumbs and fried. Again, however, this was served with what looked like Thai rice, and I was surprised to find that the pork medallions were in fact made up of minced pork, making it seem like I was eating a patty rather than a pork loin. I did not regard this usage of minced pork as particularly flattering to the dish: it was rather like eating a deep-fried hamburger patty.

While I believe Customs House will be an amazing dining scene in time to come, I do not think that that time has arrived yet. Finding one's way to the place is not exactly simple, and it is extremely easy to overshoot the turning into the One Marina Boulevard carpark (which necessitated us travelling up and down the length of Esplanade Drive and Collyer Quay). The food at Kinki does not, I am afraid, afford much value for money, and while the more classic sushis and sashimis are probably of very high quality, a Japanese restaurant cannot normally survive on sushi alone.

Sounds a rather pretentious n pricey place, esp if one orders a la carte, judging fm your experience. The sets seem priced like the likes of Ichiban but fm your description, your set wasn't value for money, unlike what Ichiban serves.

Thank you very much for posting your Kinki experience on your blog. I am personally a fan of your blog and have been following it for a while now!

We sincerely appreciate your honest feedback, and constantly seek to improve the dining experience for our guests.

We hope to reassure you that we use only Japanese rice in the restaurant. However, we do use a different variety of rice from those traditionally used in Sushi.

With your valuable feedback, we will perhaps look into introducing other rice options in the future.

Take care, and we do hope to see you at Kinki again soon! =)