I finally got some time over the weekend to cook, and I thought I'd stop being lazy and make a hearty, sticks-to-your-sides beef ragu from scratch. Be warned that this recipe should be attempted only if you have a lot of time on your hands, i.e. in excess of 6 hours. The result, however, will be so amazingly tasty that it'll be worth it, and most of the cooking time can be spent out of the kitchen anyway, as the meat cooks on its own. 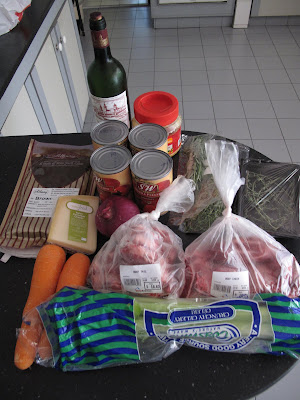 This recipe is adapted from one found in Jamie's Kitchen, and many of the essential ingredients are the same. The philosophy behind this recipe, however, comes from Hugh Fearnley-Whittingstall's excellent The River Cottage Meat Book, which anyone who enjoys cooking and eating meat should read. 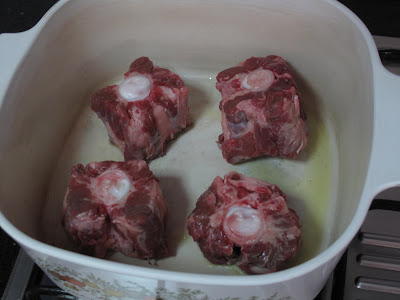 All good stews start the same way: brown your meats in some olive oil in a large casserole, over medium-high heat, in order to caramelise the flesh of the meat, which will improve both the flavour and the colour of your ragu. Try and brown your meat on all sides, but don't be concerned if it doesn't brown evenly. 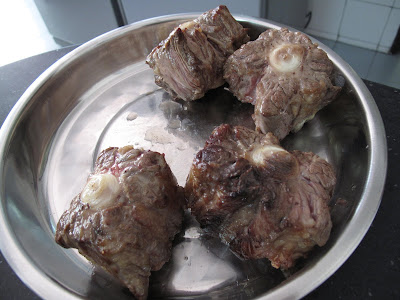 If you have quite a lot of meat (which you will if you cook using these quantities), brown the meat in batches, removing those that are already seared to a separate plate. If you crowd your pan or pot by cooking too much meat at once, the cooking temperature is lowered dramatically, and you will not be able to sear your meat effectively. 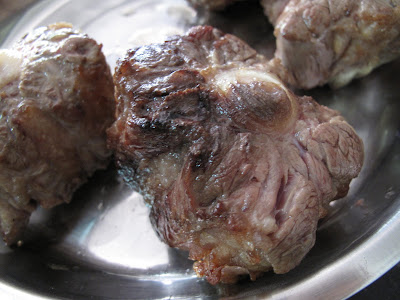 Doesn't that look gorgeous? There is something very primitively, viscerally attractive about meat that has been well-browned. Also, the good thing about using ox-tail as a braising meat is that the presence of bones and cartilage fortifies your sauce or stew, adding body, as well as a more robust, masculine flavour. 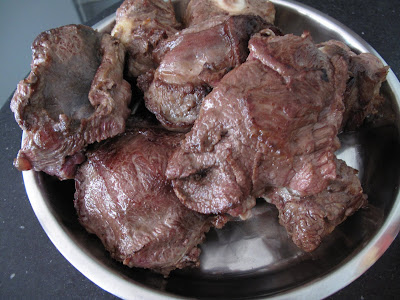 Beef cheeks are also a very good braising meat due to the high collagen content, and the lack of bones, sinew and gristle also means a fairly high return on your initial (fairly modest) outlay. 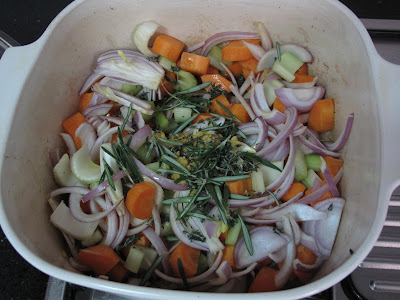 After all your meat has been satisfactorily browned, remove the meat from the pan or pot, and heat up a bit more olive oil. Proceed to brown your onion, garlic, carrots and celery over a medium-low heat. The idea is to caramelise them slightly rather than burn or blacken them, so adjust your heat accordingly. Add your herbs, and cook over low heat for about 5 minutes till the vegetables have softened. Stir the vegetables with a wooden spoon periodically to ensure that they do not burn. 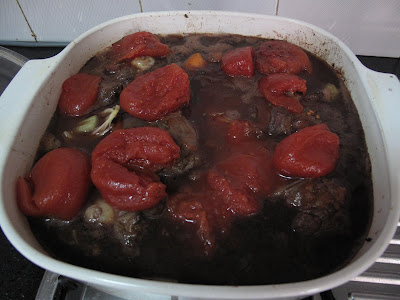 Return the meat to the pot, and add the wine, stock and tomatoes (including the juice). If there isn't enough liquid, top it up with more wine or water, till the meat is almost covered or just covered. Bring to the boil, then cover the pot and reduce the heat, till there is only a gentle simmer.

At this point, all recipes for slow-cooked meats tell you to put the pot in the oven for about three hours. I have found through experience that this is nowhere near enough, so don't bother with the oven. Leave the pot to simmer gently on a very low heat on the stove, covered, for 4 to 5 hours. Do not worry too much about overcooking your meat, because this is generally impossible.

If you have the time to spare, it is highly recommended that this recipe be prepared one day in advance, as that really gives the flvaours a chance to come into their own, in a riotous explosion of taste. Simply take the pot off the stove, let it cool down, and then pop it in the fridge overnight. Once you reheat it back to simmering temperature, you can simply carry on where you left off. 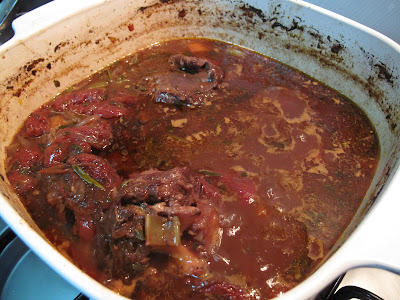 After about 4 or 5 hours (depending on the strength of your stove), the braising liquid should have cooked down by about a third or a half, and its colour will have intensified into a rich, ruddy ochre brew that emits heady and intoxicating fumes. 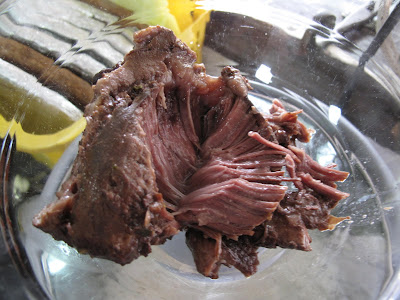 Regardless of how voluminous or colourful your braising liquid is, however, the true test is the texture of the meat. Stop cooking only when the meat is fork tender, that is, when the meat fans open into discrete strands when teased with a fork. As you can see, the interior of the meat should still be pink. 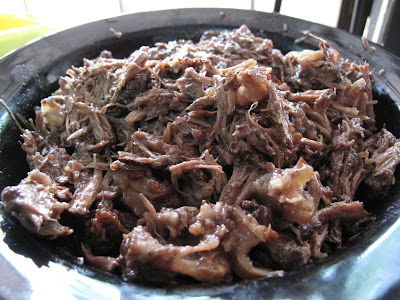 Using a slotted spoon, remove the meat to a separate bowl or container (reserving the braising liquid in the original pot), and with a pair of forks, tease the meat off the tailbones, shredding the meat into thick strands. It is somewhat heartbreaking to have to do this, and I suppose you could always change your mind and serve an ox-tail stew instead, but sometimes a hand-shredded ox-tail ragu pasta is even more divine. 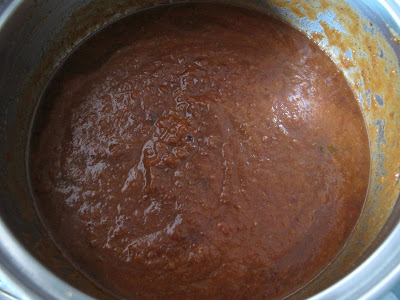 Blend about three quarters of the braising liquid, which should give you a tawny-coloured paste. Strain the remaining one quarter back into the blended paste to thin it out, and discard the pulp that was unable to pass through the strainer. 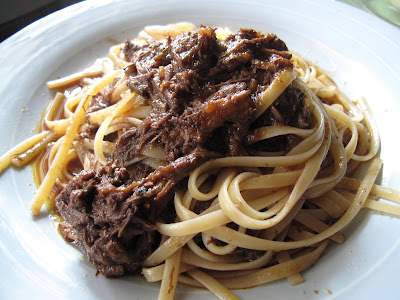 When ready to serve, add the shredded meat to the sauce and warm through, and serve over pasta of your choice (though I recommend something large like pappardelle or rigatoni). If all has gone well, your ragu will not only have an incredible texture from the shredded meat, it will also taste incredible: layers upon layers of flavours all heaped upon one another in a fantastic celebration of sensations.
Posted by Colin at 9:26 PM