Apologies for the long delays in between posts: I've been swamped with work and am finding it hard difficult to eat out, let alone post reviews.

In any event, brunch is fast becoming an increasingly popular phenomenon in Singapore. Perhaps it is the influence of our growing expatriate population, or the fact that the hectic pace of life these days leads to the natural desire to lazily while away a Sunday morning. I've written previously about having brunch at Spruce, and last month I was able to try Jones the Grocer for brunch on a weekday, which is fortunate because the restaurant does not take reservations and it is close to impossible to find a spot on weekends. 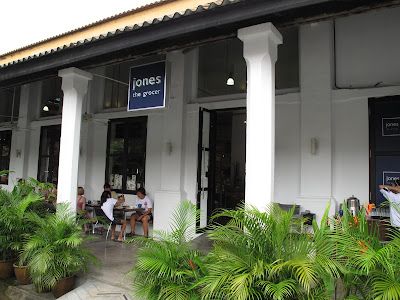 One of the anchor tenants in Dempsey/Tanglin Village, Jones the Grocer has been there for a number of years now, happily occupying the centre of attention. As its name suggests, you can go to Jones to have lunch and stock up on a week's worth of groceries at the same time. 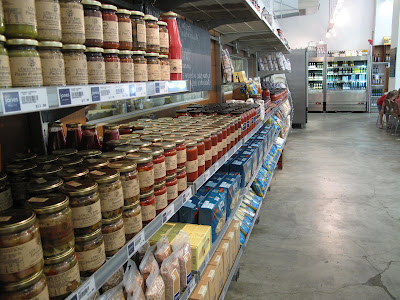 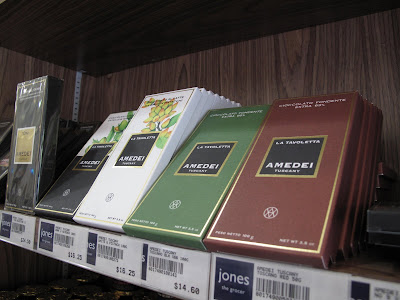 There is an entire case dedicated to chocolate, and you can see that the premium Italian Amedei brand is well-stocked. I don't recall seeing Valrhona, though, so possibly they don't have the distribution licence for it. 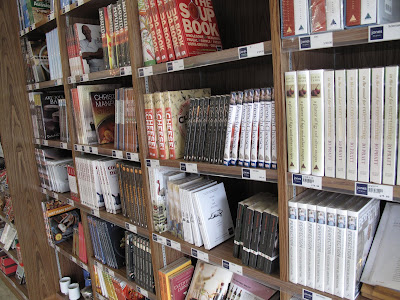 In addition, Jones the Grocer has a shelf (and accompanying table) full of cookbooks, most of which have been autographed by their famous authors. The collection here is impressive enough to rival most large bookstores, and you'll probably linger here for a bit as you wander around the shelves, picking up books at random and admiring their glossy, tempting pages. 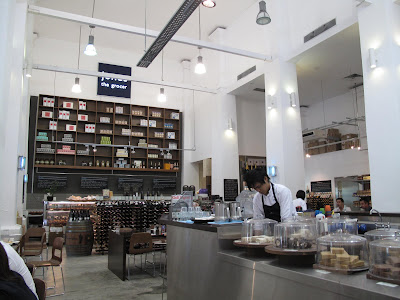 Of course, some people do come to Jones for the food too. The centre island serves as coffee station, order station, dessert counter (with psychedelic cupcakes and rich-looking brownies on display) - a very Australian concept which has now been replicated all over. 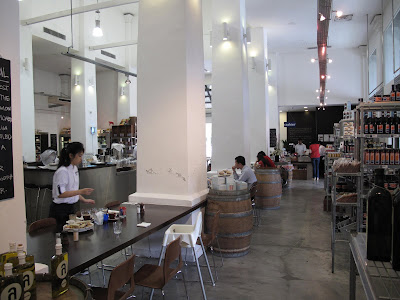 What I was not very pleased with, however, was the service I received. Every once in a while, there will be a letter to the Forum page of the Straits Times complaining about how local Singaporeans are discriminated against in restaurants, and how, in contrast, expatriate diners receive lavish, red carpet treatment. While I think the issue is exaggerated, every once in a while something happens that leaves a bad taste in one's mouth.

First, although I informed the waitstaff that I was in something of a hurry, they told me that it was not possible to order anything off the lunch menu before 12 noon (this being around 11.40am). Fair enough, I thought to myself, and waited patiently. At 12 noon sharp, I placed our lunch orders, shortly before an expatriate family sat down at the table beside us. The same waitress who took my order also served the neighbouring family, and wouldn't you know it, not only did their food arrive first, I eventually learned, after waiting half an hour, that she had forgotten to key in my order.

Although I was eventually given a free dessert by the manager, it is lapses in service like this that are deeply off-putting. While the oversight may not have been intentional, an unfortunate, nagging doubt is created that we, for some reason, were not worthy of attention. 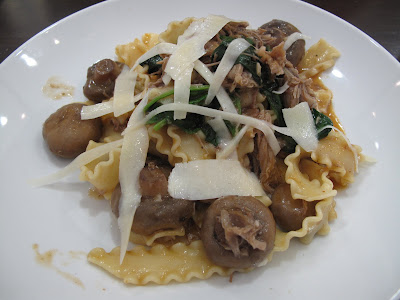 Thankfully, the food arrived eventually, and unpleasant thoughts were put aside in order to concentrate on more important matters: eating. S had a pasta dish, which turned out to be ventagli pasta served with button mushrooms and a chicken ragu. Ventagli is not a pasta you see very often, and it was cooked nicely al dente, its undulating edges helping to catch the scant sauce. 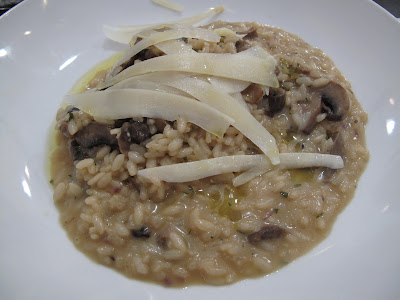 I decided to have something equally substantial, as I was somewhat hungry after the wait for the food. My mushroom risotto was a little underdone, as the rice grains were a bit too firm and hadn't yet melded lusciously into each other. Other than that, however, the risotto was fairly enjoyable, and came in a sufficiently sizeable portion that I felt full for quite a while after. 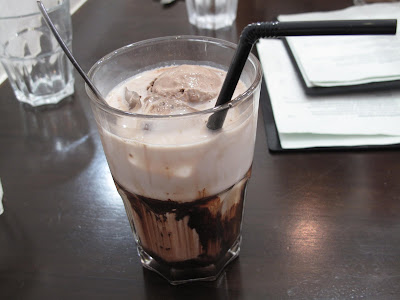 Alas, my quest for the perfect chocolate milkshake goes unsatisfied: the offering from Jones was a milky, thin affair, with an obligatory squirt of chocolate sauce. Although topped with a scoop of chocolate ice cream, the ice cream wasn't dark or rich enough, and hadn't been adequately blended into the milk.

My lunch at Jones the Grocer was blighted with more misses than hits, and given its mainly expatriate clientele, prices are not exactly low. It seems, therefore, that the cue should be taken from the name: visit for groceries, rather than for a meal.

The simplest thing to do is: blog it, mouth it, boycott it.

Seriously, nobody should put up with bad service, there is no need for it. Be it black, white, yellow, pink, colours of the rainbow.

They could be doing tasty things to plain water, but if the service is below par, forget about it!

I was at Jones the Grocer recently, and I would say that I didnt not find such "discrimintation" though I find it justified if you feel "overlooked" To be on the fair side, sometimes it is what we order that makes the difference I guess, I know a good risotto takes time, and perhaps the other table just ordered a salad or something? Good food is worth waiting for, I say. I had a very good meal there.