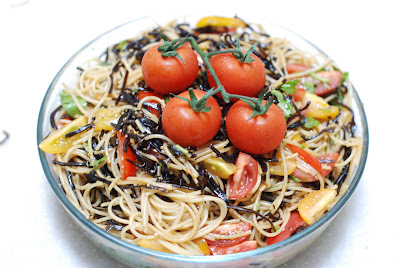 This past week, I've been slightly obsessed with this idea of prawn oil, after tasting a pasta that had been cooked in prawn oil. I decided to embark on an extraction project of my own and researched the topic online.

What I discovered was that prawn oil is extracted essentially the same way as prawn stock, by frying prawn heads and shells. Several recipes suggested frying an odori (Italian for "herbs" or "scents") of onion, carrot, celery and thyme and mixing this in with the prawn heads, which is what I did. I only used the prawn shells and heads, freezing the bodies for tempura later in the week. I used one carrot, one large yellow onion and a stalk of celery.

Then I added a tablespoon of tomato paste and poured in a litre of good quality extra virgin olive oil. Yes, one litre. (In defense of my prawn oil, it made a large quantity). I let this mixture cook for 1.5-3 hours over a slow and small flame, which preventing the oil from burning but rather, allowed it to absorb all that good prawn stock. At the end of the process, all the ingredients had boiled down to a pulp and I strained out the beautiful, orange-coloured, fragrant prawn oil. I started with a kilogram of raw whole black prawns (about 25 prawns) and ended up with approximately 3.5 cups of prawn oil. 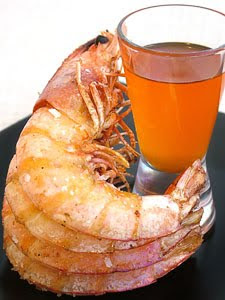 In case you are wondering what prawn oil looks like, this is a picture above. This oil is so versatile, in this recipe, I used it for a cold konbu pasta but you can also use it for sakura ebi pasta (which I'll show next). It can be used for very asian recipes like sar hor fun, or prawn mee, or very western recipes like truffle prawn spaghettini or used as garnish, to give three or four drops of prawn oil in a cauliflower or leek and potato soup.

To make the cold konbu (kelp) pasta, pick up some dried or fresh konbu from a Japanese supermarket. Dried sliced konbu is the easiest to find, though I prefer the fresh variety, if you can get it. Sometimes, the konbu is tossed with sesame dressing or seeds (goma konbu), which adds flavour.

Cook the required amount of dried pasta, I sometimes use fresh pasta but this time I used Barillo No. 3 Spaghettini. I used 3/4 of a packet with 400g fresh sliced konbu to feed 8 people. When the pasta is ready, plate it and toss the pasta through with the 1/3 cup of prawn oil, konbu, sliced cherry tomatoes, chopped cilantro and sesame seeds (if it's not goma konbu). Refrigerate the pasta for half an hour. 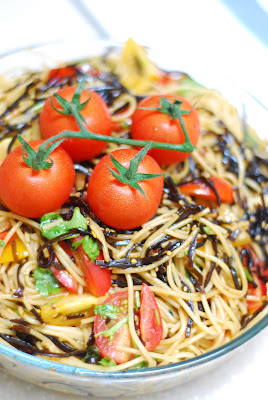 This dish can be made ahead of time, in fact, it probably should be, which makes it ideal for entertaining. You must be careful not to overcook the pasta and that the pasta does not dry out in the refrigerator (you may need to add more prawn oil if it does). This pasta won lots of praise and that's unsurprising because it's really refreshing and fragrant, ideal as an appetizer or a light lunch.
Posted by Weylin at 3:22 PM

try this method which we use in kitchen..cook the pasta to the required timing...then shock all the pasta in very ice cold water.. then drain them to toss with your wadever sauce before serve..