Editorial note: This review was requested by TimeOutSingapore. We were not paid for this review but we did not pay for the meal.

We arrived at Seven on Club Street on a weekday night and were one of the only tables at this cozy eatery. Club Street in the last few years, has become occupied by random furniture, bridal and eateries, from high end flower stores to seedy golf simulators and unfortunately, has lost quite a bit of its crowd and cache.

Seven on Club Street markets itself as Modern European and indeed, the food runs pretty conservative to the core, like the fake flowers in little black vases on each table. The decor of the place pairs heavy wooden beams with bright yellow decals and the place is helmed by Chef Jason Lee. 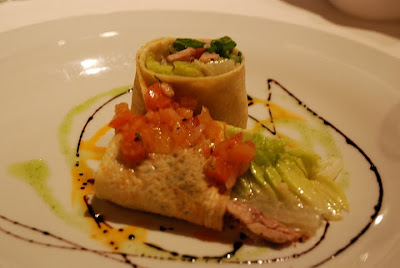 The first course was his take on the caesar wrap ($16), with a parmesan crepe rolled over a mix of lettuce, tomatoes and chicken. This was my least favourite dish, as there was too much oil, leaving my lips oily after eating. The tomatoes were local, light-coloured, grainy and watery. 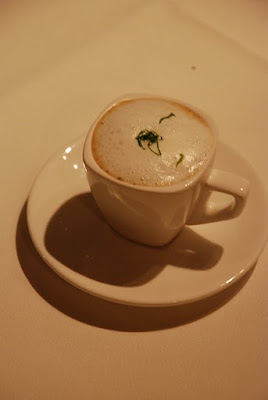 We started dinner at 8.15pm and waited till 8.40pm for the first course but thankfully, the pace of the meal picked up as we went along, with the mushroom cuppuccino of porcini and wild mushroom ($8), arriving at 8.50pm. This was slight contradiction, as the cuppuccino, rather than being light and frothy, was a dense, solid puree of mushroom and bay leaf. It was small and thick and a tad salty. 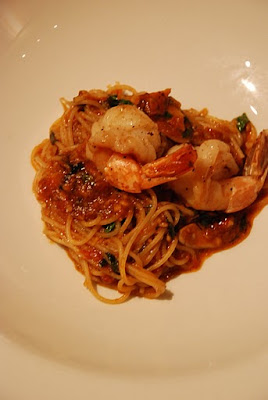 The angel hair pasta of garlic prawns cooked in spicy sundried tomato pesto ($26) and was rich, hot and spicy. Although it was well-cooked, the pasta and garlic was overwhelming and again, left a thick, oily residue on the plate. I would have preferred the pairing of a hot pasta with heaped topping of cold, sweet ebi prawns to really bring out the contrast. 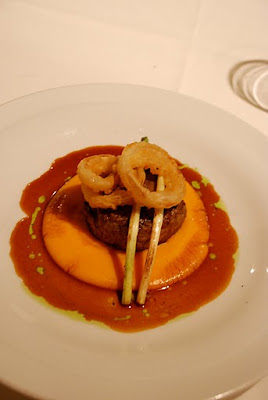 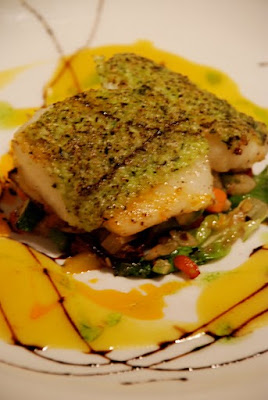 The main courses were really the star of the meal, at 9.15pm, we were served the basil crusted chilean seabass ($32) and the grilled tender and juicy beef loin fillet ($28). When I found out that Chef Jason used to cook at Chijmes, at Capella and the Upper Room, it did not surprise me. His main courses and even the presentation, were bright, big and strong flavours, the sort that would stand out in a show theatre or a darkened dancefloor dining room. At times, I felt that the flavous were too obvious, for example, I would have liked the basil crusted Chilean seabass with a blander and lighter sauce like a frothy-sweet carrot reduction, rather than laced with saffron sauce, tomato and parsley oil and balsamico reduction. However, the crispy tastiness of his seabass and tenderness of the beef loin were really good and the composition of the plating was very pretty indeed, almost theatrical, with the creation of a saddle on the loin with two peeled asparagus. 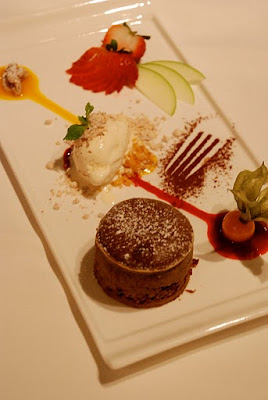 The dessert of piping hot individual Valrhona chocolate fondue ($14) was the passe epitome of Modern European but I did see on the regular menu, some more unique choices like coconut pudding and lychee panna cotta which I wish we could have tried. The chocolate fondue is Chef Jason's signature and to be fair, it was a lovely dish, warm, runny and rich on the inside.

Overall, I found the food well-prepared but not particularly imaginative, although there were mains on the menu like pork loin and duck breast. The menu is fairly small and concrete and not very good value for the pricing but the restaurant does boast a very attractive $28 set lunch. The service for the night may have been overwhelmed by our presence but that goes no way toward explaining the unsmiling, awful service- I've gotten more smiles from old granny stewardesses on British Airways. They were more sulky than stoic, didn't ask what doneness we wanted the meat, didn't top up the bread and of course, didn't refill the waterglasses.