Day 3 saw us driving into Rotorua, a quaint but surprisingly touristy city, where we had lunch at Relish, a laid-back, friendly cafe along Tutanekai Street, also affectionately known as "Eat Streat" due to the number of restaurants packed in one row. 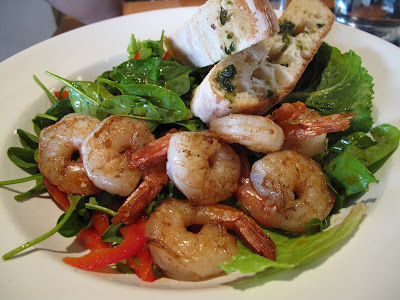 The king prawns in S's salad seemed small to me, but they were fresh and crunchy, and dressed simply with some crisp salad leaves and soft ciabatta slices. 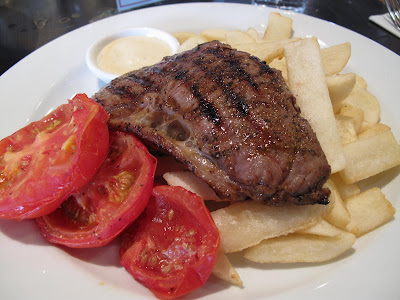 My chips were somewhat under-fried, as they were a rather pale off-white, rather than the beautiful shade of golden one would normally associate with chips, but otherwise my grilled sirloin was tasty and meaty, shorn of any distracting sauces and with only sweet roasted tomatoes as an accompaniment.

Relish offers simple lunches at decent prices, and their dinner menus look tantalising, so I was slightly disappointed that we couldn't come back for an evening meal.

That evening, after a spot of rather lacklustre shopping, it was off to Bistro 1284, a highly decorated restaurant that has consistently been voted Rotorua's best restaurant, and that is frequently lauded for the quality of its lamb and beef. 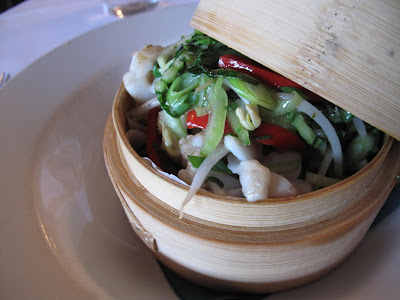 So it was with some puzzlement that I regarded the starter: squid with Asian greens and a sweet chilli dressing, steamed in a bamboo steamer. It wasn't bad at all, but there is simply an ineffable incongruity at having such an Asian-influenced dish in what is, essentially, an upmarket meat house. It's like going to a curry house and being served foie gras and oysters. 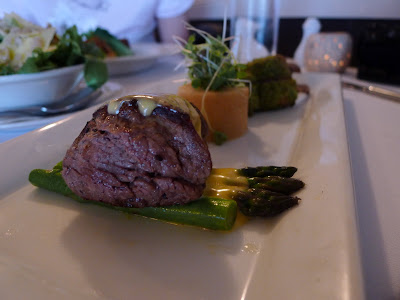 Dining mishaps continued through to the main course, though this was mainly my fault: I'd got greedy and ordered a duo of lamb and beef, served with asparagus and bearnaise sauce, thinking that that would give me two bites at the award-winning meats. Unfortunately, the two cuts of meat were downsized, making it difficult for full justice to be done to them. 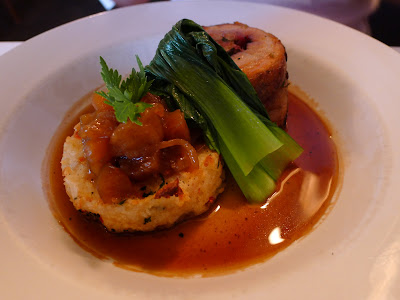 S, however, was very happy with her main course of twice-cooked pork belly with spiced apple relish, chilli and coriander rice cake, which was no surprise, as it balanced the tenderness of the pork, the sweetness and tang of the apple relish, as well as the spice from the chilli and the coriander, very deftly. 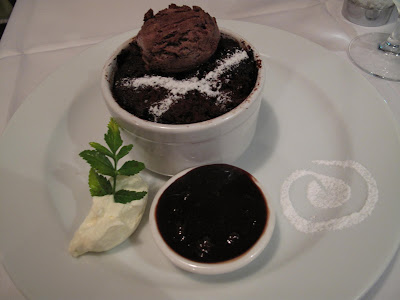 Desserts at Bistro 1284 looked a little uninspiring, however, so we decided on a change of scene, and landed up at Ambrosia Restaurant & Bar (1096 Tutanekai Street, Rotorua 3010, Tel: +64 07 348 3985), where we ordered the very last chocolate pudding, which was a fairly substantial affair, a dense and moist cake served with chocolate ice cream, a dollop of fresh cream and some blackcurrant sauce.

The next morning we got up bright and early to go white water rafting, and we decided to have a big breakfast before setting off, so it was back to Eat Streat, and a lovely cafe-restaurant named, appropriately enough as we were the only ones there at 7 in the morning, Solace. 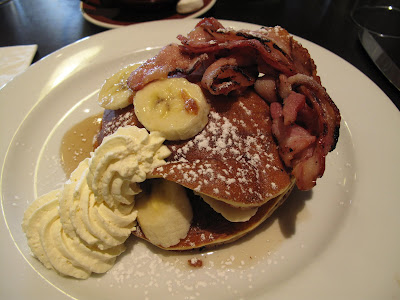 For some strange reason, even though the size of portions during lunch and dinner is not remarkable, New Zealand breakfasts are enormous, and a solid breakfast is often more than sufficient to tide you through to dinner, unless you have a robust appetite. My stack of pancakes with banana slices, whipped cream and maple syrup was delicious, but oddly came paired with some rashers of bacon, which apparently is also what they do in the US. Oil and fat simply do not mix very well with sugar and fruit, so I can't really understand the logic behind this. 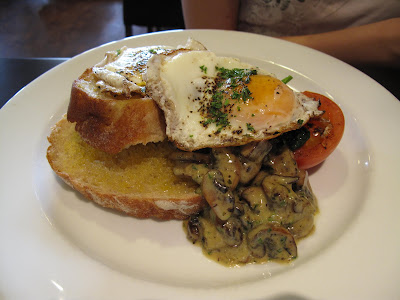 S had a nice big breakfast with buttery toast, fried eggs, and creamy mushrooms, and served with sweet grilled tomatoes. A rich, hearty meal that ensures you start your day with plenty of energy; enough, for instance, to tackle the Grade 4 rapids we were soon to encounter.

After a good three or four hours of rafting, we showered and freshened up, and got ready to head out to dinner. I had made a reservation at the Aorangi Peak Restaurant, as all the reviews promised fabulous views across Lake Rotorua, but I was quite concerned at some of the photos I saw, which revealed tacky 80s decor and crockery. I was afraid the food would be equally dated, and wondered whether I was making the right choice, particularly as there were still so many unexplored restaurants in town along Tutanekai Street. 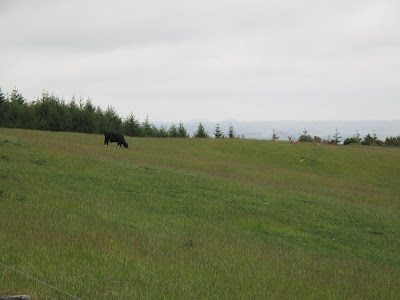 Being located atop a small mountain does, however, have its advantages, such as being able to watch the local wildlife play and gambol amidst the lushness. We saw rabbits, a herd of deer, and even a stately bull make their way across the meadow that was located just beyond the restaurant's boundaries. 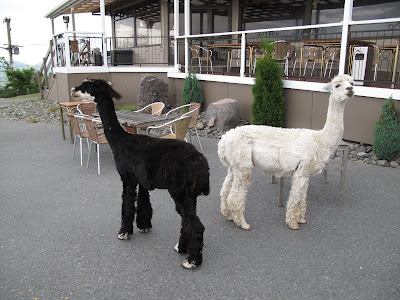 In addition, the restaurant has a pair of friendly alpacas that wander freely about the grounds, and which diners can feed (remember to wash your hands afterward) - I imagine they must be a hit with children, and adults can take in the spectacular view on the veranda, where there is a small gazebo which is, presumably, used for weddings, given the amazing vista of all of Rotorua laid out below. 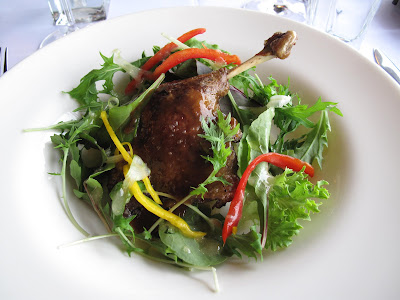 In terms of food, however, the restaurant had some decidedly bizarre offerings. I do not believe I have, for instance, ever had a duck confit as an appetiser. Although the duck had been suitably slow-cooked, the skin of the duck had not, however, been adequately crisped up in an oven or on a stove, and as a result the skin, instead of being delectably crispy, was somewhat limp and soggy. The salad was fairly fresh, but could really have done with more dressing. 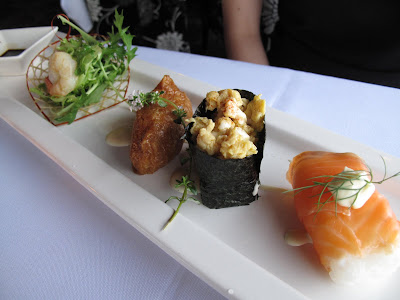 S's starter was even weirder - sushi in a Western restaurant? It reminded me of an episode from Gordon Ramsay's Kitchen Nightmares, and I didn't take very much. It wasn't that bad though, and it was the closest thing to Asian food we'd had in a while. 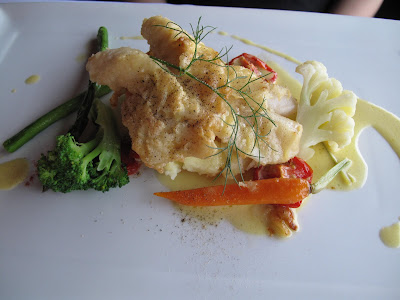 S's fish filet looked much more traditional - floured and fried, served with a white cream sauce and some vibrantly coloured vegetables for contrast. 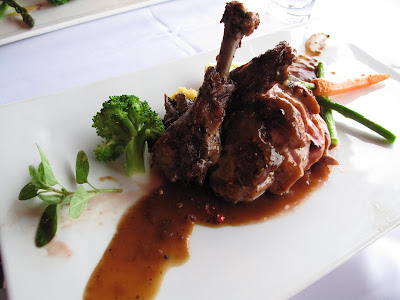 I, on the other hand, had gone the whole hog (or duck, rather), and ordered a duck breast as my main course, which turned out to be a mistake. Not only was it rather excessive to have duck for two consecutive courses, the kitchen had also decided to give me a second drumstick, in addition to the breast meat. This may have been in compensation for overcooking my duck breast, because I discovered to my dismay that it certainly was not pink, but a rather dry shade of brown. 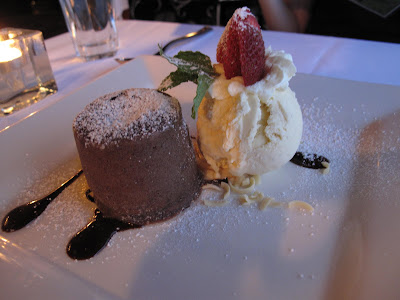 Dessert was supposed to have been a chocolate fondant, but the liquid chocolate was far too thin, making it a far cry from the familiar, comforting molten chocolate cakes we so often take for granted.

Notwithstanding the spectacular view, therefore, the restaurant presented more misses than hits, although I suppose it is no doubt a romantic getaway on a Saturday night, or a fun outing for families on a Sunday afternoon.