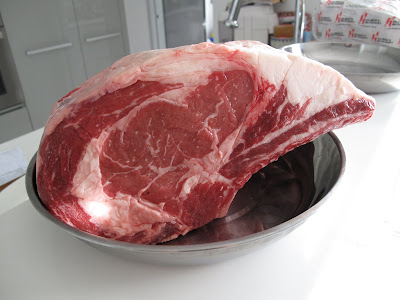 What do you see when you look at this photo? I don't know about you, but I see beauty. Beauty in the freshness and redness. Beauty in the rich seams of fat running through the meat, like so much geological strata. Beauty in the arch of the rib bone. It's sad, when you think about it, that fresh, respectable produce should be considered the province of the well-heeled, and yet we think nothing of children sporting iPhones, or young professionals aiming to buy flashy cars with their first years' paychecks.

Which is why I think Hugh Fearnley-Whittingstall's The River Cottage Meat Book is one of the best food books I've read. Not only is it an excellent cookbook, it's also an apologia - an intellectual and philosophical defence, and advocacy, of the love of meat. More importantly, however, Fearnley-Whittingstall preaches respect: it's fine and dandy to love eating meat, but do you really respect the animal that gave up its life for your steak? Do you understand how meat should be reared, fed, husbanded, slaughtered, aged, carved, cooked and served? Would you bat an eyelid if you learned that the lamb in your stew had been boiled rather than simmered?

I often reread parts of Fearnley-Whittingstall's work, and I am constantly rewarded with new insights, and forced to re-examine many of my own views and beliefs. It's true, of course, that one needs to either have a lot of time or money (preferably both) to live religiously by the author's example (he rears his own cows and makes his own sauces), but that doesn't mean one can't try.

With that in mind, I decided to cook a roast rib of beef for New Year. I've always found the thought of cooking an entire forerib fairly intimidating - something which was not helped by my mother's gloomy prognostications of undercooked beef and oven racks being unable to support the weight of massive pieces of meat. Having read and re-read the recipe provided by Fearnley-Whittingstall, however, I was convinced by the simplicity of his prescribed method, which is as follows: 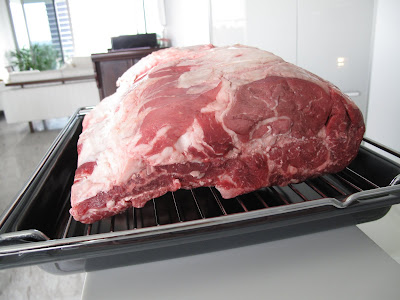 1) Depending on how many people you plan to feed (1 rib will feed about 2 to 4 people, depending on whether you have any side dishes), buy a roast of between 2 to 6 ribs ($56 per kg at Huber's Butchery). Most home ovens will not be large enough to accommodate a full 6-rib roast, so ask your butcher to cut the rib into half. 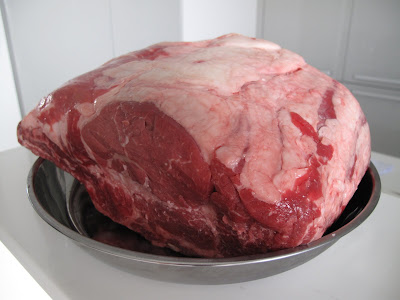 2) Preheat your oven to 220C. Trim off as much excess fat from the rib as you like, leaving as much as you feel comfortable with (some fat is necessary to lubricate the meat and keep it moist). Season with salt and pepper, and then place the rib in the oven to sizzle for 30 minutes. It is important to notice that this "half hour sizzle", as Fearnley-Whittingstall terms it, is a pretty reliable guideline: almost all meats of any size can be seared in the oven at 220C for 30 minutes without drying out, save for very small (less than 1kg) joints of meat or game birds (e.g. pigeons or small chickens), which therefore require a shorter sizzle. Conversely, large roasts may benefit from a slightly longer sizzle (e.g. 45 minutes).

Those who are familiar with cooking meat will recognise this as essentially a browning process, and the advantage of doing it in the oven, rather than on the stove, is that there's no need to keep turning the heavy piece of meat to ensure an even sear, and you'll only need to clean the inside of your oven, rather than all over your stove top (albeit your oven will get rather oily as the oil spatters). 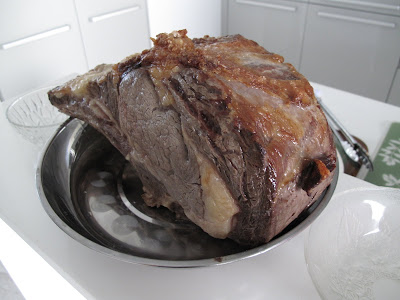 3) After 30 minutes, your meat will have developed a nice, brown crust, like the one you see in the picture above. Turn the oven down to 160C (you can leave the oven door ajar for a minute or two to help it cool down more quickly), and then continue to roast your beef, using the following timelines as a guide: 9-10 minutes per 500g for rare, 12-15 minutes per 500g for medium, and 18-20 minutes per 500g for well done. The shorter cooking times are for joints of 5kg and above. Having used these guidelines myself, I must say they are uncannily accurate, although for best results I would of course recommend a meat thermometer (the temperature at the thickest part of the joint should read: 50C for rare, 60C for medium and 70C for well done). 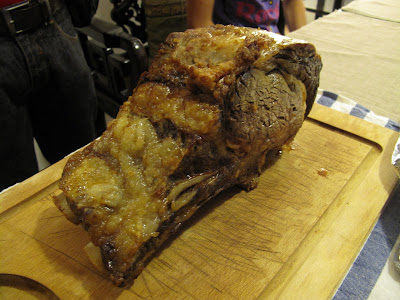 4) Take the beef out of the oven, and let it rest, lightly covered with some tin foil to keep it warm, for half an hour. It it exceedingly important that the meat is left to rest, as this gives the meat's juices a chance to settle down and redistribute back into the meat, ensuring that the meat will be moist, rather than dry, when it is served. While the meat is resting, you can use the time productively to prepare a quick sauce, or check on whatever side dishes you've decided should accompany the beef. 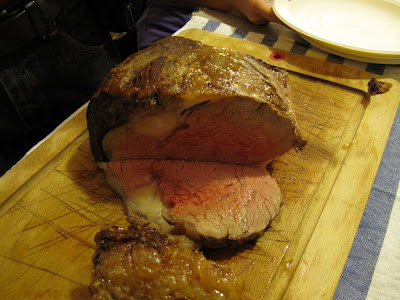 5) Carve the meat on a large cutting board, preferably one with an indented rim to catch the juices that are bound to be released. As you can see, although the photograph is a little dim, Fearnley-Whittingstall's timelines really do work, to produce, in my case, an amazing medium-rare prime rib roast, which I served with simple mashed potatoes.

It should be apparent by this point that a beef rib roast need not be a daunting affair at all, and in fact it is one of the most simple dishes I've cooked. For something so uninvolved, however, the results are invariably stunning, and no one can resist a roast rib, so you be sure that the roast will be demolished in no time.

If I haven't convinced you by now, The River Cottage Meat Book really is a worthwhile read, and I strongly recommend it to anyone who cares about, or would like to know more about, their meat.
Posted by Colin at 10:46 PM