The end of the year is always the annual high point, not just because it brings year-end bonuses, and presents, but also because it means holidays, and holidays mean vacations, and vacations mean getting the chance to try food in other countries.

This year, we decided to go to New Zealand, which, thanks to commercials for Anlene milk powder, is famous for having "more cows than people". With produce in such quantities, good food can't be hard to find. Our holiday was limited to the North Island; specifically, it was to be a driving holiday, setting off from Auckland, the biggest city in New Zealand and - according to The Economist - one of the best places to live, before heading down to Waitomo to spelunk and black water raft in some glow-worm caves, and then off to touristy Rotorua , with its sulphurous geothermal pools and historic architecture. After some wine-tasting in beautiful Napier, and trout fishing in lovely Lake Taupo, we're back in Auckland and ready to head home.

Although I had no hand in planning that exuberant itinerary, I did take responsibility for planning where we were going to be eating at each stop. I discovered that, despite the amazing abundance and quality of fresh produce, New Zealand cuisine has still not yet come into its own in the same way Australian food has, and there was only a handful of restaurants to choose from off TripAdvisor or Chowhound. In addition, I was surprised to learn that food in New Zealand is, on average, actually more expensive than food here. Of course there are no superstars like Guy Savoy who will charge you your right leg for dinner, but we were generally spending between $75 to $100 per person on dinner (1 NZD = 1 SGD), and even breakfasts were around $20.

Still, one mustn't complain about the cost of a holiday when they come by so rarely, and it makes much more sense to write reviews of the restaurants we went to.

Our first meal was dinner in Auckland, and I thought we ought to start on a high note, by dining at one of Auckland's best restaurants, the French Cafe. Located at the end of a very long Symonds Street (we rather foolishly began at the wrong end and spent the next half an hour trudging down the interminable road), the restaurant is quite a swish affair, with dark leather seats and a well-heeled clientele. Reservations are absolutely necessary, especially on weekends, and we were forced to move to the bar to have our dessert as we had made a fairly last-minute reservation, and had to relinquish the table quickly. 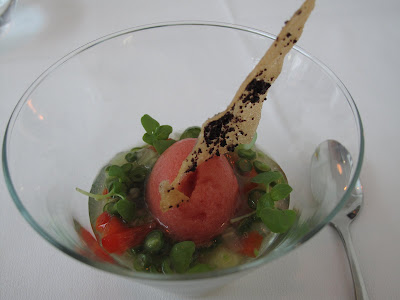 The food definitely displays a classical background, but with updated techniques and interpretation. My starter of gazpacho jelly, for instance, was layered with imagination: feta cream at the bottom, with a chilled, lightly-gelled soup of fresh, clear, concentrated tomato essence on top, in which slivers of red bell peppers and sliced green beans hung in suspension, and finally a ruddy, ice-cold tomato sorbet, into which a thin olive wafer had been inserted. Amazingly refreshing on a summer's evening, with a melange of flavours and textures, I thought this was easily one of the best dishes of the entire trip. 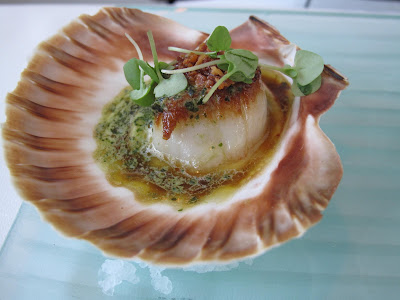 S also enjoyed her starter of seared scallops, topped with some smoked bacon and drizzled with a cauliflower cheese and basil sauce, served in a beautiful scallop shell. Rich, tasty, succulent scallops are always a treat, and I was feeling quite pleased with choosing the French Cafe as our first culinary stop. 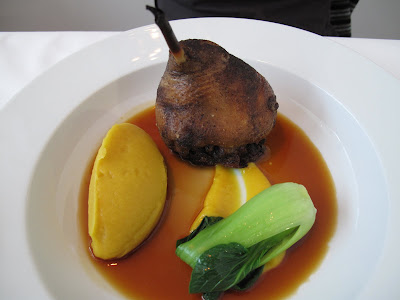 S's crispy roast duckling, however, was a little bit of a let down, as it seemed that the kitchen had decided to take the familiar "duck a l'orange" and give it an excessively Asian influence. As a result, the sauce was spiked with mandarin orange juice, a solitary, overcooked bak choy lay bedraggled and limp on the plate, and the entire dish was infused with a rather cloying sweetness. This was our first encounter with New Zealand cuisine's strange penchant for "orientalising" their food, a practice that I find detracts from the flavour and integrity of the dish. The duckling, having less fat than a full-grown duck, was also less moist and a little tougher than roast duck. The sweet potato mash, at least, was good. 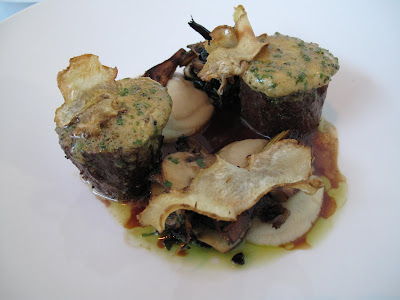 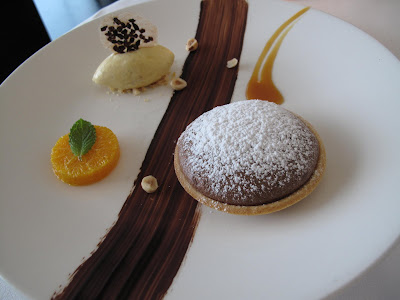 Dessert was also magnificent, notwithstanding our having to move to the bar to have it. A small but decadent chocolate souffle tart, served with a cream ice cream and a slice of orange to cut through the sinfulness, was a lovely way to end off the meal, and the perfect welcome to New Zealand.

The French Cafe deserves its reputation as one of New Zealand's finest restaurants, and a trip to Auckland is not complete without a visit.

I had originally planned for us to have dinner at HUHU Cafe, a stylishly modern restaurant that has garnered rave reviews on TripAdvisor, but sadly I discovered that the restaurant was completely booked for a private event on the one night we were going to be in Waitomo, so we had to make do with dinner at a neighbouring town, where the food was uninspiringly poor, and best not put into writing.