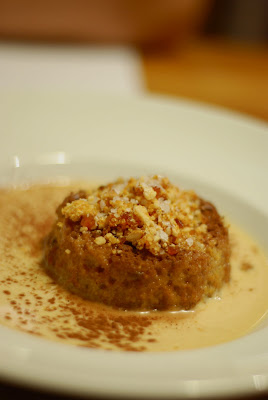 My reigning favourite cafe is a place called Cumulus in Melbourne, a gorgeous and stylish, tucked-away little place that churns out new, good food and brilliant eating experiences each time I'm there. Over time, I've come to realize that there really is a gold standard for good restaurants and good food, it all really Feels the same.

I can always tell because I feel inspired, while eating, I start thinking of recipes that would really work in and for the particular restaurant, or savour flavours that I can't wait to try out at home. Cumulus made me buy a mandoline and slice fennel like never before, frying it lightly with green olive oil and orange. Good food makes me feel, like cooking and like eating, no matter what day or week it is.

A mark of a good restaurant is also when, no matter what comes before and after, I leave feeling like the day just became better. No matter what the price point, the best of restaurant experiences, like Momofuku Ko in New York and Solociccio in Panzano, Tuscany, are when I leave dancing a little jig in my heart and hearing springs of jazz tunes. The best restaurants have the culinary equivalent of a Disneyworld je ne se qois, they make people feel... happy. 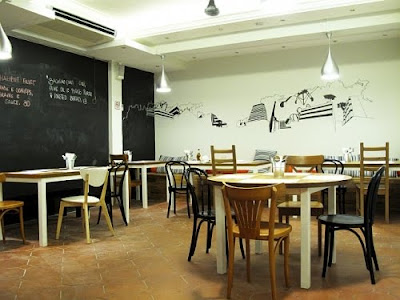 Just the other night, I went to just such a restaurant and I think this place, indeed, the chef, will not remain unnoticed for long. I'd love to say that I'm very plugged in to Singapore's eating scene but in truth, I entirely chanced upon this place, having seen a Facebook update by Yuan Oeij of Prive. I tracked down the restaurant Artichoke and found that it was in Sculpture Square, by the junction of Waterloo and Bencoolen street, in the shadow of an old orange, yes orange, chapel. 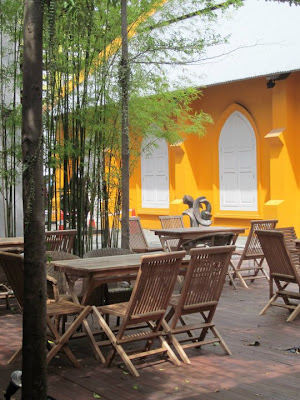 This square and chapel have been modified into buildings that house workshops and studios for 3D animation and art exhibitions and the garrison structure of the church and cobblestoned yard have been well-preserved.

I'm a sucker for beautiful names (how evocative is Sculpture Square?), purposeful Conservation buildings and restaurants that have the motto "We believe real cooks make real food with their own hands. Artichoke’s team epitomise this ideal, making our own fresh cheese, butter, pickles, condiments, sausages, cured meats and fish, baked goods and pastries in-house." What this means in restaurant lingo, is that I knew without even asking, that this place was run by a chef-owner. I called up and was given the last available late table for dinner that same evening- score! 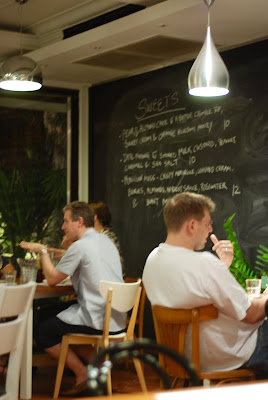 The restaurant was kitted out in the cafe style that has become du jour, funky flooring, Ikea faux vintage lights, wood tables and I swear the Salvation Army must be running out of mismatched chairs. (I don't mean this in a mean way, my home and the living room from where I'm typing this, could be described in very similar vein). I noticed a few unusual things when I walked into the restaurant, one was the use of dukkah, which could have been attributed to the menu's somewhat Moorish leanings but which I associate far more with Australian cooking. 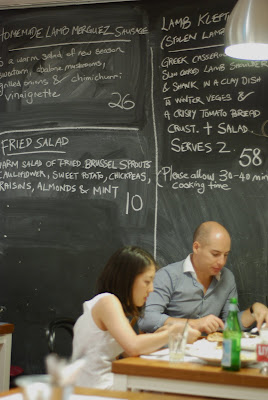 The second was the presence of three large tables of Caucasians or asian girls with white guys. I was surprised, the expat crowd in Singapore is notorious for supporting their own when it comes to food, even dodgy Italian joints employing entire families, so this is quite an achievement for a local chef. Then I realized what it was- while the earlier prejudice is true, what expats are also really good at, is sussing out a good value deal. And, this restaurant definitely was, mains averaged $26 and $56 for a shared plate for 2 or family-style, while desserts were $10, this in the center of town and with a convival, comfortable atmosphere. Hard to find. 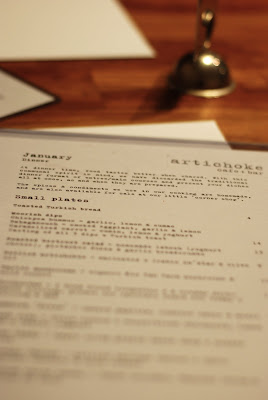 I realized a third reason later on in the meal, which is that the food is actually very authentic. Having spent some time living in London with a Lebanese roommate, I am particularly picky about babaganoush, amongst other Middle Eastern dips. It is rarely ever fresh, tart and wholesome in Singapore but it was here.

They were delicious and despite being, I thought, really full from Colin's rendition of Gordon Ramsey for lunch earlier in the day (more on this later), I polished off all the light, Turkish bread with dips before I was cognizant of how much I had eaten. They were really good, two days later, I was in a meeting in the middle of the day and started day-dreaming about tasting the blended chickpeas and smooth olive oil. 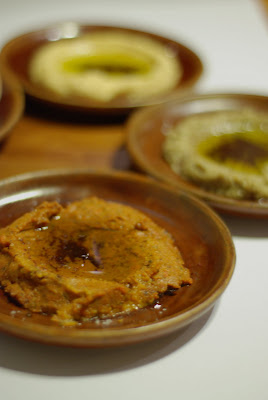 When our Kin Soon mushrooms arrived, I could tell that they were perfectly, turgidly fried, still succulent with all their woody, musky sweet juices. Then the Kurabuta pork chop came to the table, dusted in panko and topped with shaved fennel and I thought that between the single-origin produce, the way the mushrooms were cooked and the fennel, this was quite a unique offering for a local-helmed kitchen. 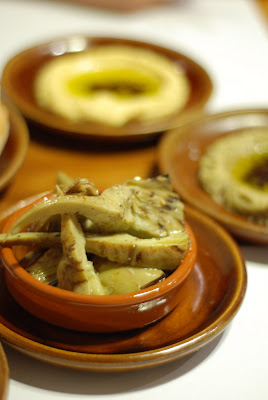 Having been fortunate enough to catch Bjorn Shen as we left, I learned that he had been in Sydney and Brisbane before returning to Singapore and while he had been in chef whites, he'd spent the last few years in academia, teaching marketing. Bjorn is one of those playful, shaved-headed grill cooks (in Singapore, this is known as an ACS guy), very much like Engsu Lee of Peguin vs Crow, who is as irreverent and humorous as his food. After dinner, we were given a scrunched up brown bag and in it, we found three sour gummies. I'm not sure if this is entirely clever marketing (you know, I would have preferred a brown-bagged pair of macarons) but I did eat two on the way to the car and thought, boy but it's been a long time since I've had a sour gummy. 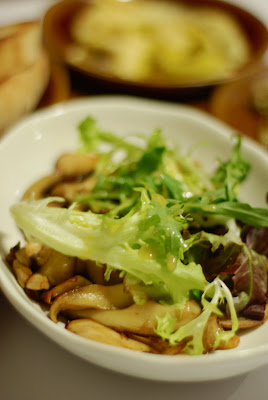 Remember his name, because although it is advertised as Moorish, the food really reminded me of the best of modern Australian like Ezard or Lotus and it lends itself to so many different directions and influences, that it's very exciting. It was unpretentious, it was honest and it concentrated on fresh, local produce which gave a real kick to the taste and flavour of the food. Unlike Bistro Soori, where I could identify the "borrowed" elements from at least six different brand-name restaurants in the appetizers, or Andre, where there was a little bit of trying for the sake of being creative-different (and bear in mind, I liked both of these restaurants), Artichoke really is simple and yet innovative at the same time, it is much more down-home an experience. 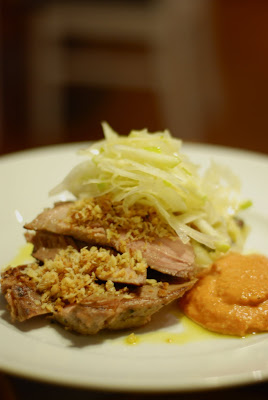 Like all new start-ups, there are areas for improvement in Artichoke, one is the service, which was patchy. We had to ask our server, what the specials on the board were and then he thought to tell us that three were already unavailable.

The menu is still fairly tight, particularly in desserts, where they don't yet seem to have a dedicated dessert chef and could use more feminine choices of lighter citrus desserts to cut through the fairly rich appetizers and mains. (We had the pear and almond cake with sweet cream and the date pudding with smoked milk custard, salted caramel and peanut crumble, the former was good, the latter outstanding and would have been even more so if the milk had been more chilled, ala a Tres Leches cake). 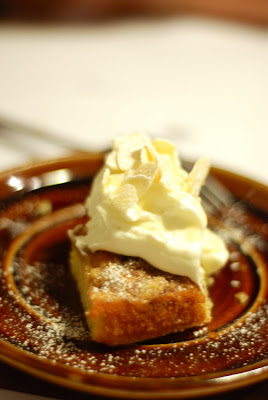 There are also some logistically odd dishes, like one special of Stolen lamb, a roast which takes 30-40 minutes to cook. Unless that is advertised to customers over the phone bookings ala Cocotte's signature roast chicken, I'm not sure how many would like to wait that long to get the meal. Lastly, I've also been told that brunch here on the weekends is more ordinary, with the usual mill-run eggs and bread-like cakes. Having seen tonight's dinner menu, I would assume that brunch would also have similar twists and turns in culinary combinations but I guess that remains to be seen. Overall, these are a very small price for the excellent experience we had. I'm already looking forward to going back with a bigger group for the twice-cooked lamb and pork belly with scallops, so look out for a more comprehensive review. I don't often say this, but this place is really, really good.

I just found this place as well - do give their weekend brunch a try - I was very impressed with the unique entrees! Great combinations and a nice change from the usual "expat" brunch of Eggs Benedict