Now that, increasingly, I rarely go out for meals, it's usually my father who susses out new eating spots.

We went to one of his most recent discoveries, which turned out to be almost a hop, skip and jump away from our place, is a casual Italian trattoria in Goldhill Plaza called Da Luca. Helmed by the eponymous Luca Pucciani, formerly of Garibaldi and Gunther's, who has decided to strike out on his own, Da Luca is a rare Italian restaurant amidst the profusion of Japanese eateries (which, in the current climate, tend to be somewhat under-patronised). 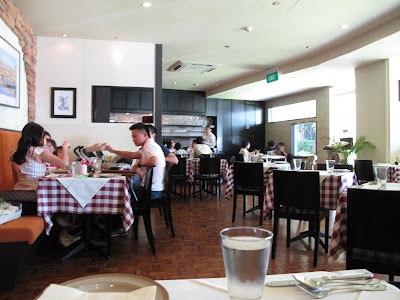 Located on the ground floor, just adjacent to the car park, the restaurant is cheerily lit, with simple checkered tablecloths and earthenware crockery, which, with some imagination, makes you feel like you're deep in the rustic Italian countryside, which I suppose was the intended effect.

Some reviews online have, predictably, criticised the service. I say predictably not because the service is actually poor (far from it, in fact), but because, first, the service industry in Singapore is widely-acknowledge as being somewhat deficient, and second, Singaporeans just love to complain about other people, without casting an equally critical eye on their own expectations and behaviour. Coming back to service, Chef Luca pops out periodically to engage the customers, his affable personality certainly makes that an enjoyable experience, while head waiter Razib is solicitous, attentive, and professional. While some of the part-time waitstaff may of course be less well-trained, as long as you make enough of an effort to be patient, understanding, or even friendly, I fail to see why service here should be off-putting in any way. 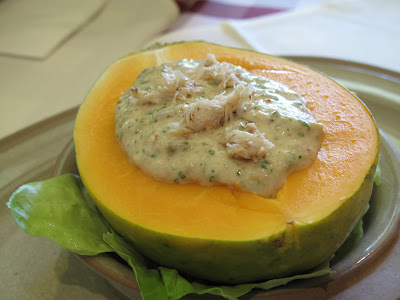 One of the special starters for the day was a crab salad served with Hawaiian papaya. I had originally envisioned a leafy salad with shredded crabmeat and some diced papaya, so I was rather surprised with what was eventually served, which was a creamy crab dressing atop a papaya half. I must say I did not really enjoy this - although the papaya was delightfully sweet, the crab emulsion was too creamy and rich for my taste. 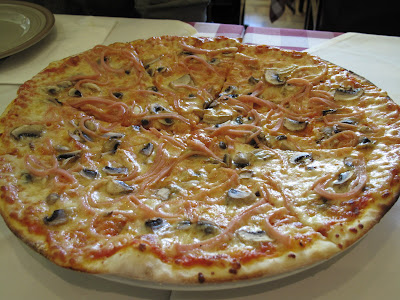 The restaurant has a fairly wide selection of pizzas, although, as with all pizzerias, I tend to find that only two or three are particularly alluring. The prosciutto e funghi was generously sprinkled through with sliced ham and mushrooms, and, as thin-crust pizzas go, was pretty decent. 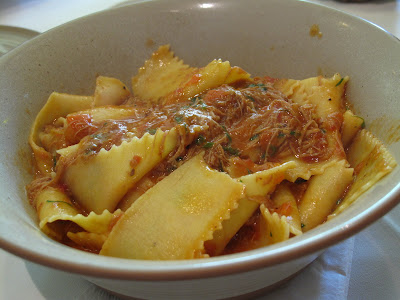 As I've remarked before, the ubiquity of Italian restaurants in Singapore means that, after a while, dishes start looking suspiciously familiar. A stracci with braised rabbit looked like a mix n' match off L'Ancora's menu, so it was perhaps unsurprising that there was also a braised duck pappardelle, which was something of a star attraction at Garibaldi, and which I eventually had. The pasta came in wide strands which were rather filling, so it was fortunate that the portion wasn't too large. The duck ragout was sweet, robust and tasty, with the duck shredded very so finely that it was almost a sauce. 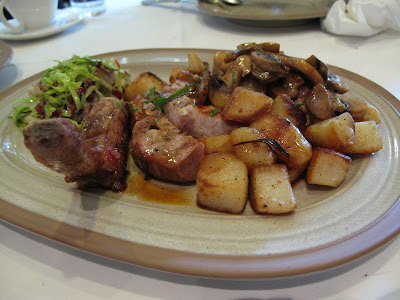 One of Da Luca's best dishes is undoubtedly the pork chop. I am not normally fond of pork in Western cuisine, as I'm a red meat sort of guy, and as such consider pork to be the poor, anaemic cousin of beef and venison. However, the pork chop here is really quite excellent. It's meaty and tender, with a rich mouthfeel, pairing perfectly with the roasted potatoes and field mushrooms that it is served with. 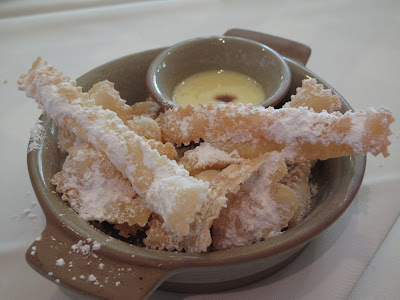 We did not have an opportunity to try the desserts, but there was a complimentary helping of what appeared to be Italian petit fours: light, airy fingers of dough, dusted with icing sugar, and to be enjoyed by dipping into a thick custard sauce.

Da Luca is a homely Italian restaurant that has the potential to become a neighbourhood favourite if its standards remain consistent, which is great when you find tire of going to posh, upmarket restaurants, but would like to simply chill out with a bottle of vino rosso and a hearty lasagne.