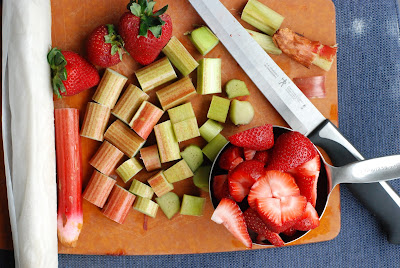 Here are the first of the Rhubarb photos. I decided to make three sweet desserts with the rhubarb, a strawberry rhubarb pie, a lemon and rhubard cake and rhubarb crumble ice cream. I've been reading about rhubarb since my earlier post last week and I now know that it's a relative of buckwheat and it is a traditional and Chinese medicine. In 1542, rhubarb sold for ten times the price of cinnamon in France and in 1657 rhubarb sold for over twice the price of opium in England. 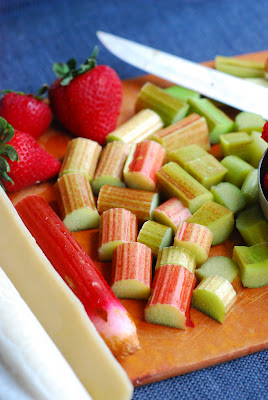 This pie is really easy to make and surprisingly delicious and comforting. I say surprisingly because rhubarb can be an acquired taste. If not well-stewed with sugar and lemon juice, it has a very vegetable-like, celeriac taste, with an open, slightly tangy and bitter note right at the end that doesn't always sit well with people, especially, as I discovered, young children. In this recipe though, the rhubarb cooks in its own juices and that of the strawberry, which helps to naturally sweeten and flavour the pie filling. 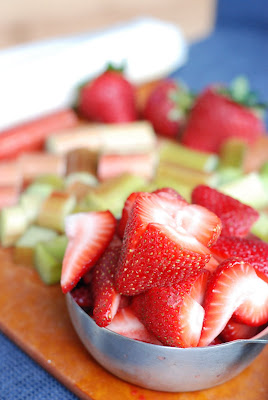 With the proliferation of blogs nowadays, I find it very rare that I turn to a paper cookbook anymore. How did we bake in the days before the internet? This recipe came from Smitten Kitchen and it is ridiculously, unthinkingly easy. You can use any pie dough recipe, either her butter flaky pie dough recipe or, as I like to use, Dorie Greenspan's perfect butter pie crust recipe from her book Paris Sweets (her crust incorporates ground hazlenut, which I feel gives it a bit more body and flavour). I always make a large quantity of dough, roll it out between parchment sheets and then roll them away and freeze them for sudden use. It's a godsend that these things can be frozen! 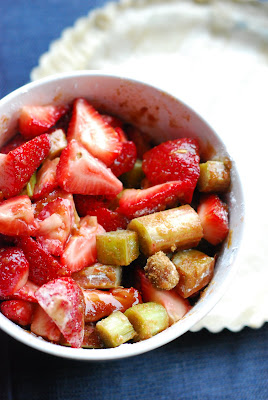 Roughly halve the strawberries (quarter, if they are large) and chop up the rhubarb. I left my fruit pieces fairly large, just slightly under an inch for the rhubarb, so that the filling would be more chunky. I used a large punnet of strawberries and 2 sticks of rhubarb. Toss them all in 1/2 a cup brown sugar, grate in a few slivers of lemon rind and add a 1/4 cup of fast-cooking tapioca. 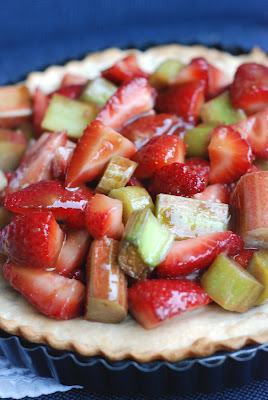 I wasn't sure what this was, so I used tapioca flour and it turned out fine, essentially the tapioca is used to thicken, to produce that goopy smeary goodness that we know of as pie filling. While the fruit is macerating, bake the bottem half of the pie at 160 degrees C. It should be baked blind (weighed down by beans or pie weights) at first, then baked uncovered for another 5-10 minutes to a pale brown. 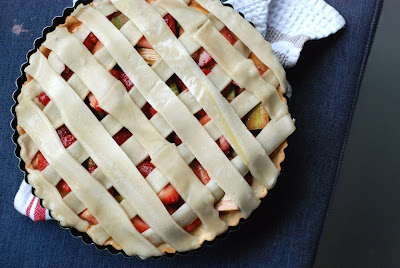 Pour the fruit in and slice up the remaining dough to make the lattice grid. When laying on the lattice, make sure to tuck the ends of the dough down against the sides of the pie base, I find using the new dough strips as tape at the sides helps to keep the pie together and the filling inside the caviy. While I was baking the pie, I realized that I didn't have a proper deep pie dish and had to improvise using a tart pan that was a bit too shallow. 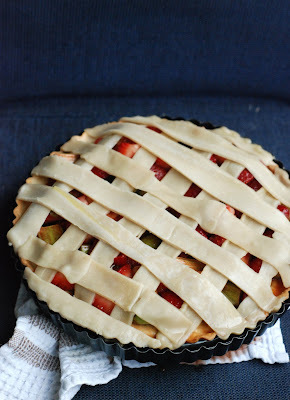 Place the pie back in the oven, turn down the heat to 140 degrees C and bake for an hour or so, until the filling has thickened and the fruit is cooked through. You can brush the lattice with an egg yolk glaze or butter to make it brown and shiny. After baking, cool the pie throughly. This will help the filling, which may be a little runny when you remove the pie from the oven, harden slightly and set. Having used a tart pan, I set the pie on a plate while chilling, so that the filling wouldn't run all over my fridge! 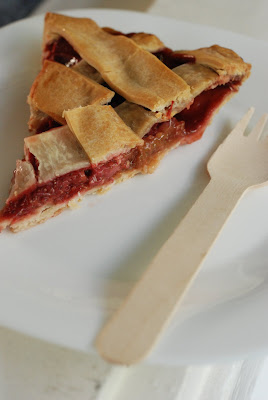 Slice up the pie with a sharp knife, pushing all the way to the bottem when cutting. Serve in wedges with vanilla bean ice cream and mint leaves.
Posted by Weylin at 9:08 AM